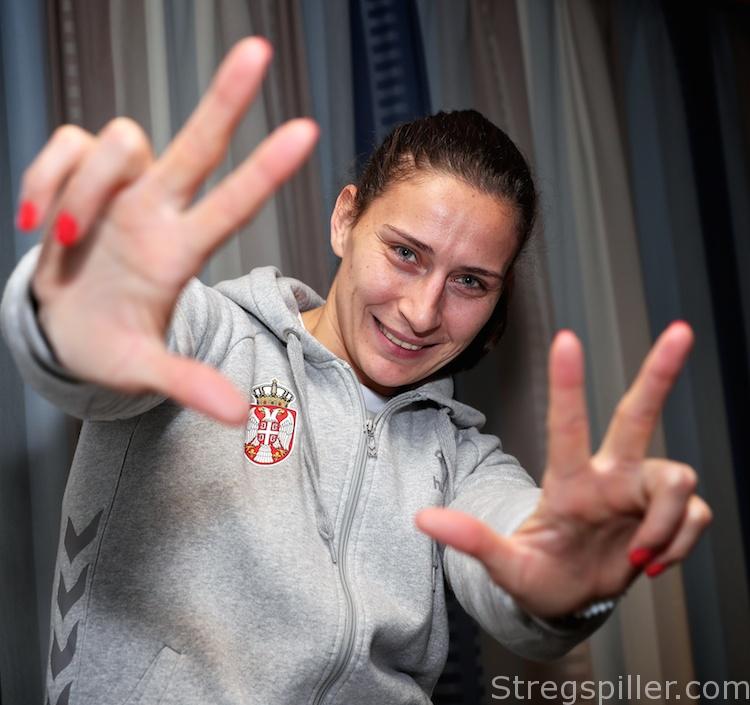 “The delay is annoying”

INTERVIEW – As the rest of the Serbian team, line player Sladjana Pop-Lazic, is frustrated that the games scheduled for Saturday at the 2018 European championship, are now postponed until Sunday due to expected demonstrations all over France.

As a consequence, Serbia will have to play two matches on consecutive days.  Still, the unexpected turn of events can’t ruin the upbeat spirit in the team.

The decision of the EHF to move all games originally scheduled for Saturday to Sunday because of expected rioting in Nantes, is affecting the teams in Group I of the main round, in different ways.

One of the nation that will suffer from the postponement is Serbia, as they will have to play two games in a row – Russia (Sunday) and Montenegro (Monday) – only allowing for minimal recovery time in between.

Line player, Sladjana Pop-Lazicm is not happy about the situation.

“Playing two games in two days against opponents like Russia and Montenegro will be very hard for us.

So, the delay is definitely not good for our team. However, as there is nothing we can do about it, we will simply have to take things as they come,” she tells stregspiller.com.

Despite the unforeseen events, she is pretty content with what her team has achieved at the EHF European championship, so far.

Serbia qualified for the main round claiming two decisive victories against Poland and Denmark, while losing narrowly to Sweden.

“As you said, we started well against Poland. Of course, we would have liked to not lose against Sweden, but they were lucky in the last second of the match – I really hope that we will continue to play like we did against Denmark,” she says.

In the main round, Russia, Montenegro and France will be on the menu – some difficult opposition for Team Serbia.

“Of course, it will be tough as we’ll be facing three very good teams.

“After all, we’ll meet Russia – the Olympic gold medal winner, France – the world champions – a very, very strong team, while matches between Montenegro and Serbia are always hard fought,” she sums up her team´s main round program.

Recent history shows that Serbia were sent out of the competition after the preliminary round at the European championship 2016, in Sweden, and in the Round of Last 16 at the 2017 World Cup, in Germany. Considering past performance, reaching a semi-final at a major tournament would be a tremendous triumph for Serbia.

Is there a chance of making it happen, despite a program that will test the resolve of the squad?

“I think everything will depend on us.

“If we play well in defense and make good use of our scoring opportunities, I think anything is possible,” says the 30-year-old line player who is convinced that her team has the stamina to handle three very physical matches.

“I think we do have the resources that will be required, not the least as we’ve had three days of rest before our first main round match.

“But, we will have to see how we manage these two back-to back games.  No matter what, we can create a few good things – it’s up to us,” she reassures.

From a mental perspective, Sladjana Pop-Lazic feels that her team is well balanced and ready for the upcoming tasks.

“We do not feel any stress – we can play free.

“Actually, the only pressure there is, we create – simply because we want to win so badly. Our mental state is excellent,” says the experienced pivot, who has played in France since 2012, first for Besancon, followed by a stint in Metz and now in Brest.

She openly admits that playing a European championship in France is very special for her.

“I am really happy that the tournament is happening in France as it feels like playing at home. I really do – I like France, where I am playing in my seventh season now, and I hope to stay here,” she says.

In Metz and in Brest, she has been used to playing in the EHF Champions League and this season, together with her teammates from Brest, they have qualified for the main round of the ongoing competition. Some of the experience gained in the toughest of all club competitions will come in handy at EURO 2018.

“On the other hand, we follow a very different system in the Serbian national team, compared to Brest. It’s mostly the individual experience gained in the Champions League that I can put to use in this tournament,” explains Sladjana Pop-Lazic, who will play a critical role, in Serbia’s attempt to top their ranking of the two previous championships.