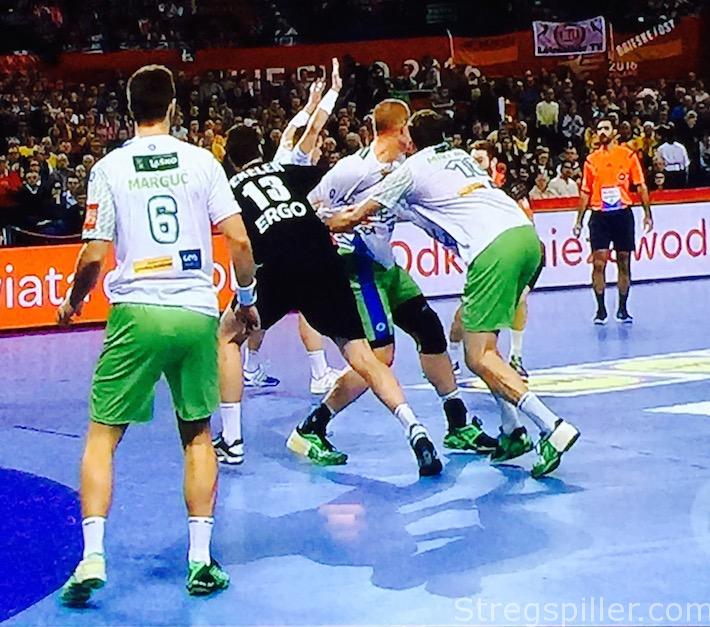 From the widely anticipated dark horse, to kicking a dead horse in a decisive match against Germany, Slovenia’s hopes of progressing far at the EHF EURO 2016 all went to ruin.

The penultimate match in the “group of death” will perhaps soon be forgotten, but the wasted chance of “what could have been”, left a bitter taste, when coach Vujović’s team booked the plane to Ljubljana, instead of an extended stay in Wroclaw.

The entire concept of Slovenia’s approach to EURO’16 was based on Vujo’s tried and tested tooth-and-nail approach from Zagreb. Rooted in a strong, dynamic but tight 6-0 defense, Slovenia was expected to reap the benefits, utilizing the elements of the tactical scheme that caused the great THW Kiel fall twice in less than one year.  And it really worked (to a certain extent) against the very competitive squads of Sweden, Spain and Germany.

But it was not easy for this physically challenged squad to play tough, strong, demanding handball, especially in defence, and especially in such a short amount of time in which Vujović attempted to solidify and turn Slovenia from a flamboyant glass canon into a defensive tank.

Boasting an average backcourt height of just over 190 centimetres, Slovenia’s players were always going to require more time and effort in order to adapt to the requirements of this all-consuming, but rewarding style of handball.  In contrast, the average backcourt height of Vujović’s RK PPD Zagreb squad stands at above 197 centimetres – a significant difference if you are to pose both attacking and defensive peril with the same line-up.

However, Vujović recognized the shortcomings from the get-go and did extremely well in making up for the lack of height in his team.  With good anticipation and deep, coherent movements, a battling defensive formation functioned well, resulting in an all-time low average of “goals conceded” ratio for Slovenia at only 24.

But the real problem originated on the other side of the pitch, undermining an otherwise controversial, but very effective plan.

Not everything clicked at the same time

The opening game against defensive-minded Swedes saw the anticipated low-scoring result, but it was Slovenia’s inability to finish chances while playing offense, that ruled out all-important points.  These offensive issues impacted the team that previously had no problems getting their goals. Au contraire – it plagued Slovenia’s entire campaign.

In one of his bold public statements Vujović was quoted by saying, “we need to pose a long-range threat to stay competitive”, but even with Borut Mačkovšek in the team, towering at 204 centimetres tall, Slovenia struggled in offense, averaging only 22 goals in three matches in Group C.

Instead of Mačkovšek becoming the main scoring outlet, he became a liability.  His movements were one-dimensional, lacked variety and often seemed blinkered while trying to get into goal-scoring positions.

To me at least, it appeared as if his teammates preferred playing without him.

The problem persisted in the backcourt’s inability to cause a threat, as evident in the match against Sweden.  Getting caught in trying to master a pass towards the 6-meter line through the thick of defence, far away from goal, Slovenia’s offensive flow was easily prevented by frequent fouls.  Increasingly, it became apparent that occasionally Vujović and his team “spoke another language”; perhaps suggesting that even more time is needed for the team to gel with the coach’s temperament and tactical solutions.

A glimpse of “what could have been”

While the low-scoring game plan worked wonders against Spain, the victory slipped through Slovenia’s fingers.  However, that very performance also pointed to the cause of their eventual demise.  The match against Spain became a “must-win” in the hope to avoid a last-gasp struggle against Germany.

The David vs. Goliath encounter against the Spanish top team saw a textbook execution of Vujo’s plan and the best performance I had seen from Slovenia.

The rugged trio of tenacious line-players Blagotinšek, Gaber and Poteko, had the lion’s share of responsibilities in both attack and defence.  The execution of line-player moves was a joy to behold, as Bombač was unleashed and Zvizej on song.  The double-pivot was ingeniously utilized in offense to take-off goal scoring pressure from Slovenia’s backcourt, while reaping the benefits from their nimble and intelligent playmakers.

The crafty Slovenian team managed to master what was certainly their best EHF EURO 2016 performance, keeping the Spanish contenders at bay, after coming back from a three-goal deficit at 16:19.  In the end, victory was ruthlessly taken away with both teams sharing the two points in a highly competitive game in a tough group.

However, it was as close as it would get to a Pyrrhic win for Vujo and his team. Slovenia had given it all.

Game over before it began

Despite the unquestionable quality of the squad, (with the exception of the 2004 crew) Slovenia’s team has never been able to shine at big occasions.

Needless to say, the mentality of Vujović’s team is passion-fuelled and the players are not easily intimidated, ready to do the unthinkable to edge their opponent.  The press statements were bold, but Vujović knew that he had a lot of issues to deal with. Known as a coach that makes an instant impact, he publicly motivated, criticized, praised and shocked to gain control over a team that has the ability to both thrill and underwhelm.

At any point it was composure, or lack thereof that ended all hope for this aspiring squad.  The feisty tactician Vujović did whatever he could to keep the flame going.  His pumped-up time-outs were life-changing experiences for many, unaware of the motivational skills he possesses.

“You have already surrendered, haven’t you? We’ve lost this match before it even began. “

“You’re bumping into each other in offense – there is no ball movement – no tough, manly one-on-one tackles. You’ve got nothing. We’ve lost it.”

What do you swear by? Who’s dying to win? Who’s going all-out for every ball? Nobody. They’re running at will right through your “wall” in defence,” said legendary Veselin Vujović in one of his time-outs mid-way through the second half against Germany.

The match against Germany saw a different Slovenia.  The hands-on tactician was never more engaged, constantly motivating his team, calling time-out after time-out in an attempt to rekindle the fire in his team but to no avail.

Slovenia’s players were cold. Wasted, both emotionally and physically after the match against Spain.  It seemed as if they were already back home, as they were sinking, showing no signs of life.  On the other side – Bundesliga consistency and composure demonstrated its prevalence, maybe even more apparent than in the glory days of German handball.

Still, the most painful realization was that the Slovenian team had let down their leader.  Left alone in the debris of what could have been, Vujović was smiling ironically; most likely at his inability to put on the uniform for one last time, turn the tide and prevent imminent defeat – something he had done so many times as a player.

The legendary player will regret Slovenia’s wasted chance at EURO 2016. Vujo wanted to set the handball world alight, when he made his coaching return to the EHF EURO after 10 years.  But instead of upsetting the establishment, Vujović witnessed the repeat of his EHF EURO 2006 campaign with Serbia & Montenegro that ended with ignominy and a less than glorious exit.

Slovenia’s underachieving foray saw the wasted passion of a misunderstood coach, a lethargic team of big names and a lot of questions only time can answer. Following the loss against Germany coach Vujović stated:

“There are many ways to lose. But the manner in which we have done it was disgraceful.”

“We did not posses the will, knowledge or desire to try and make something happen. It was not at all what we had agreed on in the locker-room.”

“Exactly what happened and why will remain between the players and myself. However, many things will become clear to you when you see the upcoming team sheet.”

“It is incredible how much strength we were lacking in defence. The movement was appalling and our most experienced players committed the majority of errors. Bombač had a fever, but I could not replace him. He wasn’t the same as he was against Spain. “

“This time I encountered a side of this team I never knew existed,” said Vujović after the 25:21 defeat to Germany.