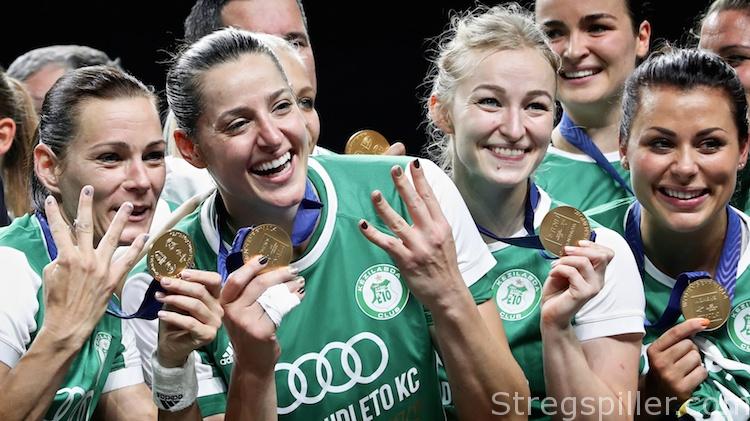 The end is not near

INTERVIEW – Those who thought Eduarda Amorim´s career is coming to an end will have to think otherwise after reading this exclusive interview with the Brazilian star from Györ.

The experienced left back and defense specialist will continue at least until the 2020 Olympics, she confides to stregspiller.com.

“The rumors about my death are widely exaggerated,” Mark Twain once said.

The same can be said with regards to speculation about Eduarda Amorim retiring from handball any time soon. Some of the pundits are expecting the end her career after this season and as of late there has been talk that she may call it quits even sooner. Nothing could be further from the truth.

“I want to play another Olympics – so I will continue at least until the 2020 Tokyo Olympics, unless injuries prevent me from doing so, of course,” Eduarda Amorim tells stregspiller.com.

“I feel fine and very fit right now and I will keep going at club level as well as in the national team at least until then,” adds the Brazilian left back who will be turning 32 next month.

This season, she is ready to chase her fifth Champions League triumph after having won the competition with Györ Audi ETO KC in 2013, 2014, 2017 and 2018 already.

“I think our chances to win the Champions League for a third time in a row are good.

“Our team is stronger and deeper compared to last season and our road to the FINAL4 seems – if not easier – then at least less complicated than in previous years,” she says, referring to the fact that Györ´s opponents during the group phase will be the champions from Germany and Slovenia, Thüringer HC and Krim Ljubljana plus one more team from the qualification tournament. And CSM Bucuresti appears to be the only serious obstacle in the main round.

“At the very least, we want to reach the FINAL4 and preferably more, as we simply want to win every time we play,” says Amorim who was awarded IFH Women´s Handball Player 2014 after winning the World Championship in an epic final with her Brazilian teammates in December 2013.

This season, she has been welcoming three new teammates as well as a “new” head coach in Györ. French world champion, Amandine Leynaud (goalkeeper) has arrived from Vardar and Norwegian internationals, Veronica Kristiansen (left back) and Kari Brattset (pivot) have joined the Hungarian handball powerhouse as well.

And then there is a different head coach, although Gabor Danyi is not exactly new to the team. As longtime assistant to Ambros Martin, Gabor Danyi has been promoted following Martin’s departure to Rostov Don.

“The three new players are all very nice girls and are a perfect fit; it will be easy to integrate them. There have been some changes in our practice sessions and the way we play with Gabor as our new head coach.

After six years with Ambros, we have to get used to several new elements, but I find change to be positive.

“With so many world class players in one team, it’s obvious that no one can expect to play 60 minutes, in every match – there will be some rotation under Gabor,” says Eduarda Amorim who in recent years has played a more important role in Györ’s defense. A fact unlikely to change considering the addition of sharp shooter, Veronica Kristiansen and the return of Nora Mørk in the foreseeable future.

“I am aware of my situation and I am okay with it.

“I realize that my role is mainly in defense end and I am happy to do a good and necessary job in this position.

“However, I still expect to get my chances to play in attack every now and then, as I have done in previous years, and I will get my share in offense with the Brazilian national team,” she says with a smile.

Györ’s reliance on Amorim on the defensive end has certainly increased after Yvette Broch’s immediate career stop just a few weeks before the start of the 2018/19 season.

“I miss Yvette a lot already, not only on the court, but just as much off the pitch as well – her good mood has always meant a lot for the spirit in the whole team.

“Obviously, I will miss playing next to her in defense. It still is a problem but I am sure we can solve it,” she says.

Given the fact that Eduarda Amorim will continue to play handball at club- as well as national team level until 2020, it is however not set in stone that she will stay in Györ until then.

“My current contract with Györ is expiring after this season, and I haven’t decided yet what’s going to happen next summer.

“I feel great in Györ, but it is not a given that I am going to end my career here and I will not rule out the possibility that I might want to try another club,” says Amorim who has played handball in Europe since 2006, spending her first three years with Macedonian Kometal Skopje before joining the Hungarian champion.

“One thing is certain – I want to compete in another Olympic tournament, before I end my career,” says a determined Eduarda Amorim.