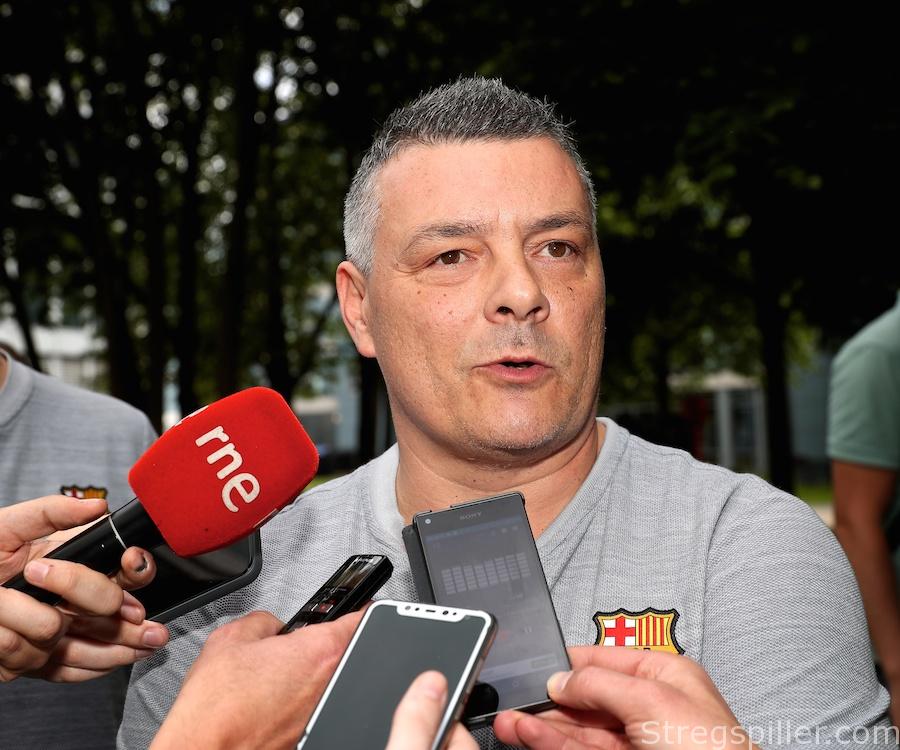 The FINAL4’s seem to live a life of their own

INTERVIEW – After a year of absence, Barca Lassa are back at the VELUX EHF FINAL4, where many people tend to see them as favourites.

Head coach Xavi Pascual does not want to hear it, however. In his opinion, the top of European club handball is so close that there really are no favourites.

After being eliminated already in the Last 16 by eventual winners Montpellier HB last year, Barcelona are back, where most handball fans expect them to be – at the EHF FINAL4 in Cologne.

Under their current name, Barca Lassa, they are here to try and win the EHF Champions League for the ninth time in history.

“We have arrived at a good moment and in good shape,” finds head coach Xavi Pascual.

“However, where that will bring us is very difficult to predict. I really find it hard to speak about favourites at all, as all teams here can actually win, the way I see it,” the Barcelona coach since 2009 tells stregspiller.com.

“When we look at our season so far, you have to distinguish between the matches we are playing in the Spanish league and those we play in the Champions League.

“When playing in the domestic league, we may be able to afford to play with some of our substitutes, but in the Champions League, we have to show up with our best team all the time, and especially at a FINAL4, we all have to be at our best.

“To me, the concept of the FINAL4 is not like a semi-final and final. They are two finals for me. It is obviously very important to win the first final, as you do not get the second final if you do not, and we will only accomplish that if we are playing at our absolute best,” he says.

No such thing as an underdog

Expect for Barcelona winning the FINAL4 in 2015, the last six events have been characterised by so-called underdogs winning the competition.

In 2013, HSV Hamburg won, followed by SG Flensburg-Handewitt in 2014, Kielce in 2016, Vardar two years ago and Montpellier last year.

To Pascual, however, there is no such thing as underdogs at the FINAL4.

“These FINAL4’s seem to live a life of their own, and besides, there are so many strong teams in European handball these days that many teams can win the Champions League.

“That is also the reason why we see different teams reaching the FINAL4 every year, more or less.

“This season, for instance, I think there were up to 10 teams who could have won the Champions League. For instance, Montpellier, who won last year, are not even here this year.

“I see more and more teams improving every year, and they obviously all want to win the biggest competition of them all.

“This just goes to show how difficult it is to even reach the FINAL4, and this also clearly indicates that all the four teams who are here, can win if they hit form on the day,” he says.

The past does not matter

In the semi-final Saturday, his men will be up against HC Vardar from Skopje.

The last time Barcelona were in the FINAL4, the Macedonian side narrowly eliminated them in the semi-final 26:25.

In the group phase this season, however, Barca got their revenge by winning 34:26 and 30:26. Xavi Pascual does not put much weight on any of those three matches, however.

“I expect that match Saturday to be an equal match.

“I do not think much about any of the games that have been previous to this FINAL4. The two semi-finals this year are probably going to be pretty much alike.

“I think that two years ago, Vardar was a different team than they are now, while we are probably more or less the same.

“But teams are obviously putting all their focus in this game, and I only hope we can show our best face,” says Pascual, who does not except his fellow Spaniard on the Vardar bench, Roberto Garcia Parrondo to be particularly better at reading the Barca team just by being Spanish.

“There is a lot of Spanish coaches all around, and for instances, there are four of us here. Of course, that is good for Spanish handball, but I do not think it gives Parrondo any particular advantage.

“When I prepare my team for an opponent, I do not think about their coach being Spanish or not, and even though we are a Spanish team, I do not think Parrondo will have any bigger chance to read us than any other coach would,” he says.

A lot of keys

“I am not sure what will be decisive in the semi-final tomorrow. Actually, there are a lot of keys to that match and we will obviously have to analyse them thoroughly.

“In games like these, I think that the individual skills of the various players are very important, and again, it is all about as many of them as possible showing their best on that particular day.

“For instance, it will not help us much to play beautifully in attack, if Milosavljev saves our shots after all,” says Xavi Pascual with a smile, which indicates that he may not have much fear of this happening.