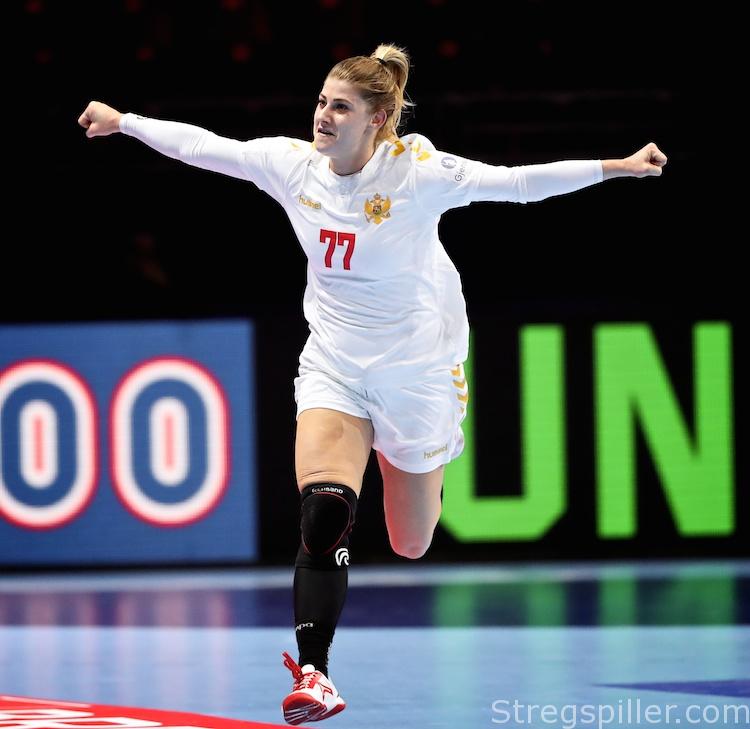 INTERVIEW – Being back “home” in Buducnost after three years with CSM Bucuresti, Majda Mehmedovic looks back at a Champions League group phase with mixed success and previews the prospects of Montenegro at the IHF World Cup in Japan, where she has high expectations for the national team.

Majda Mehmedovic and her Buducnost teammates finished the group phase in the Women´s DELO EHF Champions League according to plan with a 34:28 win at home against the German champions, SG BBM Bietigheim.

The main round of Europe’s premier handball competition will be next, but first the World Championship in Japan awaits, starting next week.

“I am really happy to play a big championship and to be part of it all once again,” says Majda Mehmedovic, who celebrated two of Montenegro´s greatest triumphs already – winning the European championship in Serbia, in 2012, only four months after taking an Olympic silver medal in London.

Led by Swedish coach, Per Johansson, Montenegro will be heading east with the hope for more glory.

In Japan, Mehmedovic and the rest of the Montenegrin team will compete in Group C, where they will be facing Romanian, Hungary, Spain, Senegal and Kazakhstan.

The last two teams mentioned before won’t pose a real threat for Montenegro, while the rest of the opponents might cause some trouble.

“I am really looking forward to Japan. I think we have a good chance to make our goal come true and that objective is to aim high.

“However, we are going to take it step by step and match by match – then we will have to see how far it will take us.

“I only hope we can avoid injuries and other health problems. If we manage that, we can go a long way, I think,” Majda Mehmedovic tells stregspiller.com.

As mentioned above, Majda Mehmedovic is back “home” with ZRK Buducnost in Podgorica, the Montenegrin capital, where she has played her entire career, only interrupted by her three year stint in Bucuresti.

“I definitely don’t regret that I joined CSM back then.

“From a professional point of view, I had three amazing years over there and I experienced a really strong league with a lot of games. All of it improved my game.

“On a personal level, I met a lot of nice people and I build some strong relationships with many of them. I have lots of good memories. In addition, I got to know the culture and the fans loved me.

“I really felt welcome in Bucuresti and all-in-all, I am really satisfied that I got this experience,” she sums up her time at CSM, the club she joined in the season after the Romanian powerhouse won the Champions League – a triumph they could not repeat during her stay.

Despite her good time in Romania, she decided to return to Buducnost.

“After all, I felt that I needed a change after three years in Bucharest.

“I had some interesting offers, but of course, in my heart Buducnost is my home and will always come first. So, I decided to come home again.”

“It’s always nice to be home and to play for the club, where I grew up. Every game in front of my own people and spectators is an amazing experience for me,” says the fast left wing, who is not aware of too many changes in Buducnost.

“I did notice that all the girls, who were really young when I left, have improved a great deal in the meantime. By the way, that’s also very good for the development of our national team.

“This aside, it is more or less the same. Everything was run very professionally here and that’s still the case,” she finds.

While she did not win the Champions League during her stay in CSM Bucuresti, she has succeeded in the competition twice already with Buducnost, in 2012 and 2015.

Yet, a third Champions League triumph may not be around the corner, considering the performance of her club thus far.

They did win all their group matches, except for two defeats against Brest Bretagne Handball. The two losses were not exactly part of the plan in Buducnost.

Especially the 35:32 loss at home to the French side revealed some surprising deficiencies in an otherwise strong defense. As a result, Buducnost take only four points to the main round. The quarter-final may still be realistic, but it will be difficult to go any further, even though they are in what many consider the easier bracket of the competition. Mehmedovic acknowledges the problem.

“We did not start very well, I admit, but I do think we got better, game by game.

“I expect us to improve even further in the main round and I am sure we will have a lot of thing to show in the next phase,” she promises.  Come January, Buducnost will be facing Györ, Krim and Sävehof in Group 2, beginning with a home game against the Swedish champions.

Even though Buducnost won’t face tough competition, except Györ, Mehmedovic still has huge respect for the opponents in the main round.

“On this level every game is hard fought and all teams have a chance to defeat each other. But, I hope we will get back to showing our usually strong defense.  At least, this is what we will try to do,” she says.

Returning to the FINAL4

Since the FINAL4 format was introduced in the Women´s Champions League in 2014, Buducnost have been to Budapest four times, winning the competition in 2015.

Their most recent appearance at a FINAL4 dates back to 2017, but on that occasion they finished fourth and last. Naturally, Majda Mehmedovic is dreaming of a return to Budapest together with Buducnost.

“Of course, the FINAL4 is a constant dream for me as it is for our entire team and probably for any handball player.

“I really believe in my team and I am sure we will make it again – hopefully this season already.”