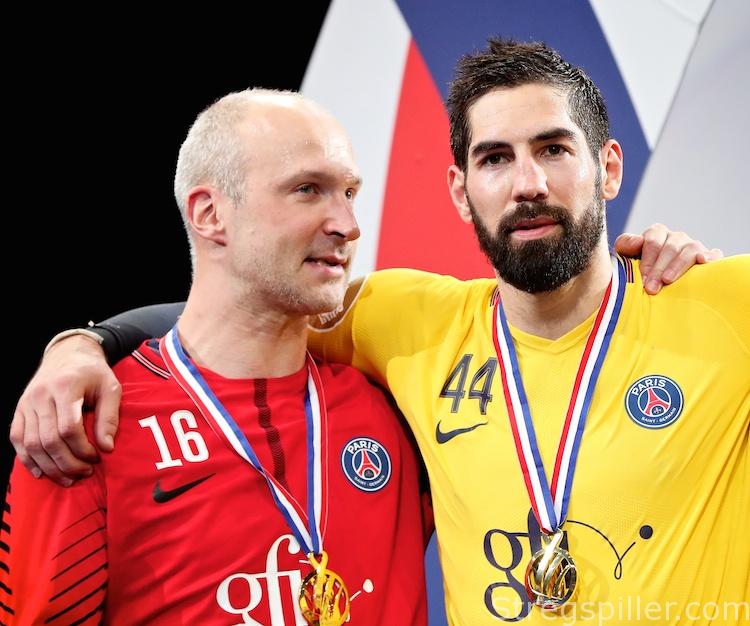 “The gap between the two leagues has never been so small”

It was the first time I spoke to Bruno Martini, the general manager of French handball giant, Paris Saint-Germain (PSG). The former goalkeeping star now has his hands full in making sure PSG wins as many titles as possible, after failing to lift the Champions League trophy the last couple of years. Here is what Martini had to say about the upcoming EHF Champions League FINAL4 and the development of the French league.

Congratulations to coming back to Cologne one more time. Obviously, it’s a big goal for your club to finally win this competition. Is it an advantage playing against your league rival, Nantes, a team which you know quite well?

BM: That’s a very good question. We don’t have an surprise for them and they won’t have any for us. This season we met many times; we crossed a lot with Nantes in the league, but also in the French cup. Last year we met in the Champions League as well – always tough games. The question is, how Nantes will react to the atmosphere in Cologne. If they can maintain the attitude of being the underdog, it will be hard to win against them, because they will be playing without any pressure. If they do feel the pressure and deal with it at Lanxess Arena, it may be easier for us.  But PSG has played really well in the Champions League recently. We know what we have to invest at this level and I hope the experience we gained over the years, as we are here for a third time in a row, will help us during this game.

It’s interesting that you talk about pressure as Nantes has players like Lazarov or Klein on its roster. Do you think that these players will help others to avoid feeling the pressure you mentioned?

BM: I think so, but it’s so special to be in the Final4 that it’s almost an individual story for each player – everybody reacts in a different way to the pressure and to the atmosphere. Sometimes it works. For example, a few years ago, Flensburg came here with a very young team, without any pressure and then they won against Barcelona (in the semi-final ed.) and Kiel (in the final ed.). They played relaxed and they managed to go all the way.  So it’s possible, but how to say it… it’s a question of details. How can the club transfer the good atmosphere to the players and prepare them 100 percent for the game. How will they perform together? How will they react when they take their first steps on the floor; it’s different for each and every one of them. Everybody tries to bring their own experience but it always depends on everyone’s self-management.

The way you talk about the Final4, it sounds like you’d like to play yourself. You never had the chance, but it seems like it’s also a great event for former players as well?

BM: Of course, it (the FINAL4 ed.) brings another dimension or two more dimensions to handball ever since we played a first and second leg final. I never played in an arena like this, in front of 20,000 fans and such a big show before the game. It’s a really good thing, it shows that things are improving, we are proud of it and we are also proud to be part of it. But yes – it would be great to experience this kind of atmosphere. Personally, it’s something that I have seen and experienced, when we played the World championship in France, in 2001, a long time ago. And I suppose Germany experienced it back in 2007, when the final was played at Lanxess Arena. The format of the Final4 is hard to live through considering my professional position, but for the fans, for the EHF, for everybody it’s such a big and great event. It shows another side of handball – very spectacular and professional – everybody should be happy about it.

Do you consider your team a favorite the way you played in the Champions League this season?

BM: It’s hard to give a good answer and it’s not easy to talk about the level of play, because sometimes it works sometime it doesn’t. In October and November we were able to play on a very high level in the Champions League, only to loose  three days later in the French league – not against Nantes or Montpellier – but against other teams. It shows that things can change quickly from one day to the other.  But anyway, I cannot accept the position of favorite because for me in the Final4 you cannot have any favorites. You have to erase almost everything you’ve done before and the pressure is certainly not the same for the two teams. There is much more pressure on us than on Nantes, because everybody is expecting that we beat at least the French club. I hope we will improve from last season, which means that we won’t be far from winning the trophy, but first let’s concentrate on the semi-final.

All across the handball world, especially in Germany, a lot of people are talking about the fact that three French teams have reached the Final4.  Does it mean that the French league is better than the German Bundesliga, now? I don’t think so but what is your opinion and why did the French league improve so much?

BM: First of all, the clubs were developing step by step, taking care of the financials and not doing things the wrong way and not too fast and not spending money they don’t have. In France, we have a system in place that controls the clubs a lot and it helps to put them on a solid foundation for the long term. Keep in mind, it was hard to fight with the Spanish, Danish or German clubs ten years ago. After all, we saw the Spanish league coming down and a many Spanish players came to play in Hungary, Romania and France. A lot of good players came and in the end I can say that the ascend of PSG helped all of French handball, as we function as a locomotive for the rest of professional handball. Everybody followed us and worked more and harder and now we can play against Nantes in front of 11,000 spectators; against Montpellier 9,500 fans showed up. It shows that the clubs have grown and organized things the right way. I agree with you when it comes to the top teams.  I think the level is still more or less the same, with regards to the first three teams. The quality of the other Bundesliga clubs  – from my point of view – is better compared to the one’s in the French league, so far. That’s why I think that Germany’s Bundesliga is still the best league in the world, because it includes more teams of higher quality than in France. But, even if the Bundesliga is ahead.