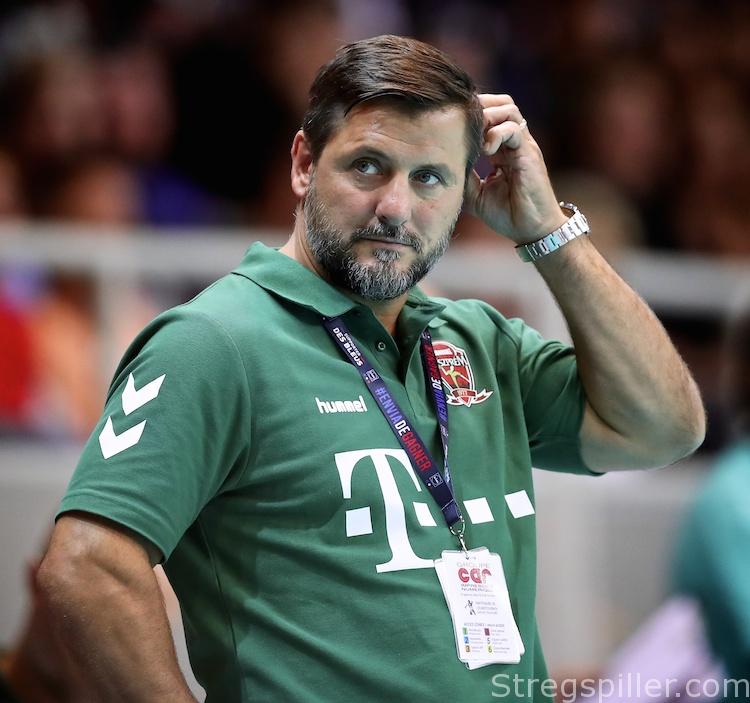 “The main pressure is the pressure I put on myself”

INTERVIEW – Ljubomir Vranjes recognizes the particular burden he is facing in Veszprém after a first season that left room for improvement as head coach of the ambitious Hungarian team.

“The main pressure is the pressure I put on myself. The club is still one hundred percent behind me,” he claims in this exclusive interview with stregspiller.com.

His first season as head coach of Telekom Veszprém was not as successful as Ljubomir Vranjes had hoped for.  Not only were Veszprém sent out of the VELUX EHF Champions League in the Round of Last 16 by the Danish underdogs from Skjern but they also surrendered the Hungarian championship to their arch rival, Pick Szeged.  Winning the Hungarian Cup was somewhat of a consolation.

Considering the outcome of last season, it would only be natural if the 44 year-old Swede with Serbian roots would feel some extra stress to perform on the outset of his second year in charge of the Hungarian handball powerhouse.

“Of course, I feel pressure, but the main pressure comes from me. The heaviest pressure is the pressure I put on myself – always trying to make sure that the team performs as good as possible.

“The club is still one hundred percent behind me. Management knows what’s going on behind the scenes – something TV and you journalists do not see,” Ljubomir Vranjes tells stregspiller.com.

“This aside, there is pressure everywhere.

“It’s correct that last season was not a particular successful one, but bear in mind that you cannot expect to win the Champions League – and yes, we lost the Hungarian championship by one goal in the deciding match against Pick Szeged.  But you have to keep in mind that Szeged is one of the strongest teams in the world as well.

“We did play a shitty game in Denmark against Skjern (losing the first leg in the Round of Last 16 in the 2017/18 Champions League by seven goals, ed.) but in these “Last 16” matches as well as the critical games in the national championship, we were hampered by several injuries.

“Another reason, why last season did not turn out the way we wanted is explained by the fact that we lost Aron Palmarsson shortly before the start of the season.  A play-maker of his caliber is not easy to replace,” he points out.

“I also wanted to implement new elements in our game of handball and such things always take time,” says the former Swedish international who confirms that joining Veszprém was a big change after 11 successful years in Flensburg-Handewitt, first as player and later as coach.

“Obviously, the biggest change was coming to a very different culture and a completely different language that no one else speaks.

“However, there’s also a significant distinction in the way the squads were put together in the two clubs (Flensburg and Veszprem ed.).

“In Flensburg, I was used to having only five to six players above the age of 25, whereas in Veszprem I got to work with older players, generally speaking.

“I was accustomed to develop players in Flensburg, but here in Veszprem I have been working with “complete” players, so to speak.

These were all changes I had to adapt to,” explains Ljubomir Vranjes who confirms that Veszprém´s enormous squad represents a challenge in itself.

“We do have unusually many players, many more than needed.  But this is due to the fact that some of the players have rather long-term contracts and I also had my own wishes with regards to players I want to work with.

“Of course, everyone cannot play every time and it is a challenge to make the team click given the circumstances.

“You cannot keep 20 players happy at the same time. That’s a simple fact I have to live with,” he concedes.

Looking ahead, he sees better times down the road.

“I feel a great deal of new and positive energy in the squad this season.

“Blood is running in the veins of the team again and this makes me optimistic,” says Vranjes who realizes that winning the VELUX EHF Champions League is one of the most burning desires of his current employer and thousands of die-hard fans.

Veszprém never won the Champions League, even though the club came close several times.  Vranjes, in contrast, already succeeded in Europe’s premier club competition in 2014 together with Flensburg.  He knows how to make it happen.

“As I said, the Champions League is not a competition you can expect to win. There are simply too many strong teams and we are certainly not the favorite to win it this season either, but we are one of the teams who have a chance to reach the FINAL4.

“In fact, I do not even want to point out any particular favorites.

“I do think we can make it to the FINAL4, in Cologne this season and once you are there anything is possible, as there are no favorites – history has proven it.

“The FINAL4 is always won by the team that is able to play two good matches over the course of two days.

“It’s as simple as that and I can only hope to do just that if we get that far,” says Ljubomir Vranjes – a man not afraid of challenges.

He and his team can take a first step towards the FINAL4 in Cologne on Saturday, when Kielce visit Veszprém Arena in their first group match of the 2018/19 VELUX EHF Champions League.