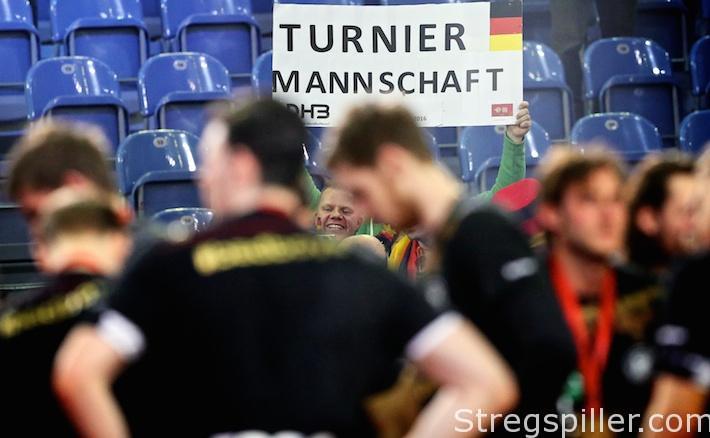 On Wednesday the German national handball team met in Kamen-Kaiserau, a small town north of Dortmund, to start preparation for the upcoming World championship.  Paul Drux, who missed the EHF Euro in January due to an injury, but stepped it up once again in Rio during the Olympics, played a major role back in Qatar in 2015, almost two years ago.  But instead of talking trash, he’s extremely calm, very relaxed and down to earth. I talked to the one you could easily call “The Silent One”, during the media session.

First of all, how did you spend Christmas, as you play in Berlin, which is quite far from your hometown?

That’s true, it’s about 600 km, so I decided to stay in Berlin, family came over; we didn’t do anything special, but it was quite nice.

You’ve missed the last annual competition back in January because of an injury and two years ago you were the “youngster”, who didn’t have to meet high expectations.  Do you see yourself in a different role this time around?

Well, I’m still quite young, but the team has changed quite a lot.  In Qatar, the crew was a bit older, since then we became “younger” in every tournament that followed.  Personally, I always try to give my very best and concentrate on doing what coaches ask me to do, so I’m still the one I used to be.

You seem to be very relaxed…

I have no reason to be nervous – that’s it.  There’s still enough time left until the start of the World Cup.

It’s the first time ever that your club coach has changed during the season.  What kind of experience has it been?

True, I’ve never experienced this before.  I also didn’t hear from others about it.  Obviously it’s kind of a brittle feeling.  On the one hand you have to prove yourself again, on the other hand it’s sad when somebody has to leave, who you played for and worked with.  But that’s pro sports, you have to deal with it or learn how to deal with it.  There’s always a first time.

But I guess you’re quite happy about the way the season has gone so far for Füchse Berlin?

Yes, absolutely – at least when you talk about the results.  There were some games where we were lucky to escape with a win. Lately we wasted an opportunity for a win or draw in Flensburg, but overall we have to be satisfied.

After coming back from your injury you have played a lot of games – Bundesliga, Olympic games, EHF Cup… How do you feel physically?

I am quite well, no broken bones or anything like that.  Obviously it’s been a tight program, but I guess Dagur (Sigurdsson) will adjust training sessions accordingly so we’ll all be at 100 percent when the tournament starts, especially mentally.

What will you do on New Year’s Eve to relax – go back home to your family?

A: No, I will go back to Berlin again, spent some time with my girlfriend, because I have my own little family, now.  I’ll be relaxing, that’s it.