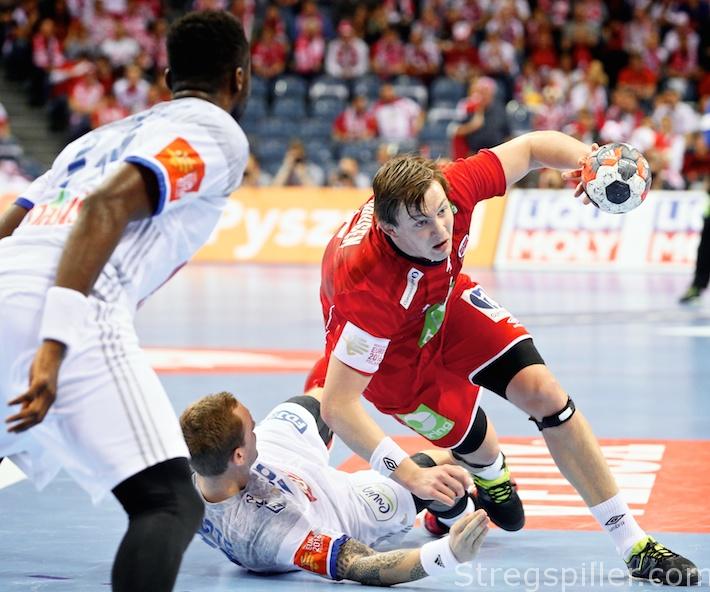 The Future Is Now

In sports every now and then an era ends.  The same goes for handball, when a legend like Ivano Balic called it a career, last summer.  Dito Iker Romero.  Kim Ekdahl du Rietz, Holger Glandorf and Thomas Mogensen, decided to retire from their respective national teams.  So who will fill the void in the years to come?  Let’s take a look at who might be shining in the future.

The player who has won the most and has proven his talent in the world’s best league – the DKB Handball-Bundesliga – is Paul Drux.  The German left-back can do it all.  He’s strong in one-on-one situations, he is good defender and he reads the game well enough to assume the role of playmaker.  He’s down to earth and far away from letting all the hype getting to his head.

Just 21 years old, he’s a true winner.  He has won the German youth championship three times, the U18 EURO in 2012, the German cup in 2014, the EHF Cup in 2015 and the Super Globe in 2015, all with his current club – Füchse Berlin and Germany’s national team.  His biggest weakness might be his physical strength.  Yes, he has a lot of power, but he has played a lot of games on a high level at a very young age already.  Still if his body holds up, he will be a leader for years to come on the national as well as international level.

Who else comes to mind?  For sure, Norwegian super talent Sander Sagosen has to be mentioned.  The right-hander decided to leave Danish side Aalborg Handbold and signed a four-year contract with Paris Saint-Germain.  Spain’s powerhouse, FC Barcelona, was competing for his services as well.  At the Catalan club, the 20-year old – probably – would have gotten more playing time and also more responsibility.  In Paris, he will have to carry less of a burden.  But who’s better to learn from than French and world handball icon Nikola Karabatic?

What makes Sagosen so outstanding at this young age is his vision for the game.  He anticipates extremely well and more often than not makes the right decision.  Getting older, while gaining more experience, will  improve his playmaking skills further.  He’s also a good shooter, relying more on accuracy than power – at least that’s what I saw from him so far.  Developing his defensive skills could make him a world-class player within a year or two.

Lukas Nilsson (Sweden) could easily be called the wild one of this group and I am not talking about his hairstyle.  Especially at the European championship in January, he still had problems adapting to some of the better defense systems, a circumstance that he didn’t have to face in Sweden’s top league, where he won the goal scoring title.  He’s a born scorer, but he still needs to learn that handball is a team sport.  Often his own will get’s the better part of him – he will have to learn to be more patient.

In Kiel, where he joins a veteran coach in Alfred Gislason, he will find himself on the bench in a hurry if he attempts to shoot at will.  And, just like Sagosen, he as to improve defensively.  Playing for the “Zebras” from Kiel it’s important to play well at both ends of the court.  Fortunately, he won’t have to deliver right away, as big names like Domagoj Duvnjak, Steffen Weinhold or Marko Vujin will help him mature.

The youngest of the bunch is Nikola Bilyk, the future face of Austrian handball.  He has big shoes to fill as legendary Viktor Szilagyi retired just some weeks ago.  Will he be able to follow a similar career path?  I had the chance to have a long talk with him some months ago and, considering his age, he impressed me with his mindset and focus.  He not only looks very mature, he acts like it.

Bilyk, born in Tunis to Ukrainian parents, moved to Vienna when he was three years old.  His father was a goalkeeper and they won the Austrian league title in May playing for Fivers Margareten.  He will have to do without his family for the first time in his life, when he moves to Kiel, just like Nilsson.  But his attitude should allow him to handle the situation and his skills could make him a cornerstone of the club sooner than many might imagine.

So if any of you were worried about how the future of handball might look like, don’t worry – it looks quite bright.