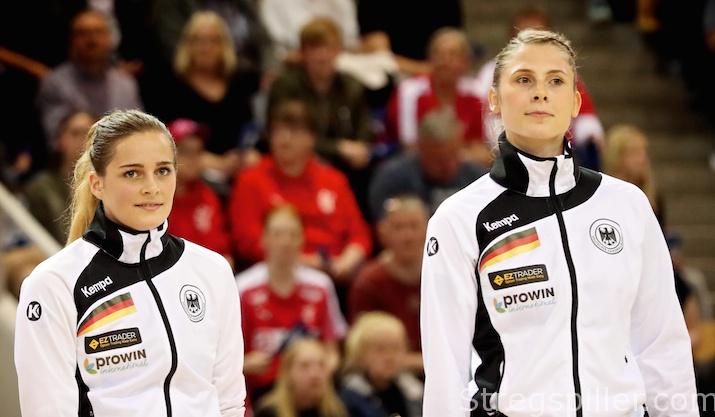 “There is some pressure”

When Anne Hubinger came down with a long-term injury earlier in the season the question arose, who might be able to replace her as right-back o Germany’s national handball team? Alicia Stolle hasn’t made her mark on the international level yet, but her speed and intelligent defense work could be a key for the German team to go far at World Cup 2017. I talked to the young left-hander from Blomberg just days before the start of the tournament.

With the start of the World championship just a few days away – how excited are you? I guess it’s hard to put it into words…

AS: Of course, I’m looking forward to the beginning of the tournament – a lot. The countdown started and everyone is really excited. We started training two years ago with this goal in mind and now it’s really close. That’s obviously a great feeling.

Is there any particular element in your – the teams – game that convinces you of reaching the final round in Hamburg?

AS: That’s a good question – I think it’s our team spirit, for sure. It’s apparent when you look at our game – both in offense and defense.

You have a clear goal, that’s reaching the semi-finals, do you see it as a burden our can you still go out and just play your game? I have a hard time believing it – you don’t feel any pressure at all?

AS: I have to admit that I personally feel most of the pressure. Right now, our coach takes away a lot of it, but of course there is anxiety. But for sure, fun and excitement are even bigger factors, but I still think that there is some pressure.

When you’re going to sleep at night are you dreaming about what might happen when you play in front of a full house, possibly scoring the decisive goal with everyone going crazy or don’t you have these kinds of thoughts at all? I think it’s normal – no?

AS: It’s true. After the group stages, it’s knock-out mode. Everything has to be perfect; there is no second chance. Actually, I guess everyone is thinking about it.

Although everyone prefers to speak about the team rather than a single player, do you think there’s one teammate who might be extremely important?

AS: Yes, I think Kim Naidzinavicius is playing very well in the Champions League so far and she is very important for our team. So, if I need to name one player it would be her.

As you’re still young are you looking up to other players, trying to learn from them?

AS: Absolutely – on my position it’s Nora Mörk who’s a world-class player or Cristina Neagu, even though she plays left-back. But it would be a dream to play at their level in some years.

Do you have one more wish aside of going far in the tournament?

AS: Making the roster, first of all, and then being able to help my team as much as possible in trying to achieve our goals.