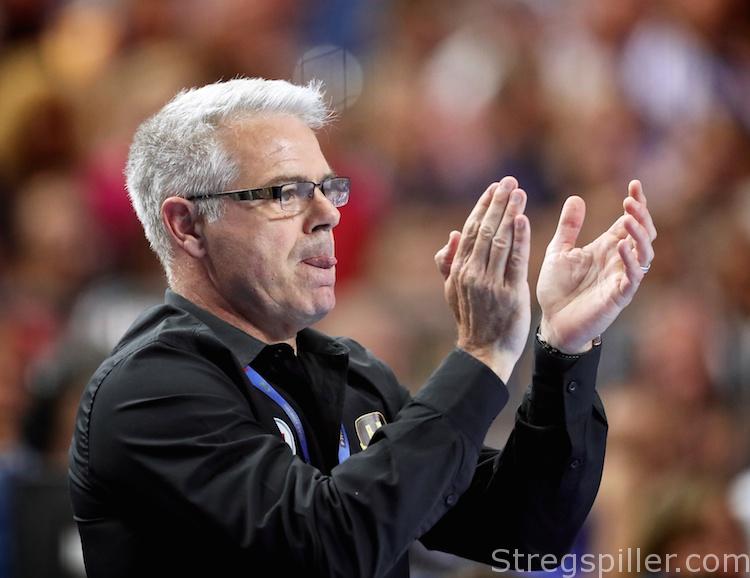 INTERVIEW – Nantes reached the Final Four of the Velux EHF Champions League already in their second try and to some it felt like a surprise. But for those who follow European handball more closely over the past couple of years, it didn’t. After the successful 2017/18 season, players and coach, Thierry Anti, were eager to take a break before reuniting last Monday.

“I went on holiday right after the last league game, still I was really looking forward to come back. At some point, it felt like the break was a bit long. On the other hand, we spent so much time together during the season that we’re quite happy to see some other faces for a few weeks”, says the coach.

This summer his job will be somewhat easier. Only three new players have joined the team and all of them were already part of the squad at some point. Valero Rivera returns following a two-year stint in Barcelona, Florian Delecroix re-joins after being loaned to Cesson-Rennes and Lucien Auffret signed his first professional contract to replace Jerko Matulic on right wing.

“It’s the first time my team changed so little. There will be no problems to adapt, no language issues, all three signings were part of “Le H” in the past – so everything’s kinda smooth at the moment”, smiles Anti.

Which doesn’t mean, that he won’t take preparation serious. A trip to Portugal, will be followed by one to Germany before playing the “Eurotournoi in Strasbourg” alongside Paris Saint-Germain, Montpellier, Veszprem and Vardar Skopje at the end of August. This schedule will lead Nantes to the first official game of the 2018/19 season –  the French Champions Trophy.

“Last summer we prepared in” Champions League mode”.  And when we played the Champions Trophy, in September, the intensity and seriousness players put on display showed that they were ready. I hope for the same effect this time around”, says Anti.

For the upcoming season, the coach has big plans. After being accused of “favoring” European competitions instead of domestic battles, he sets the record straight right from the start of pre-season.

“We want to win the French league. That’s the only trophy we haven’t lifted yet”, he states.

“Of course not. But the Champions League is a very volatile competition.

“Look at what happened last year with all those big clubs out very early on. We can’t appear on the scene and say that we want to win it (the Champions League ed.) when you look at our club.

“When you get the opportunity, then go for it – 100%. We want to qualify for the Round of Last 16 and the rest will depend on our ranking at the end of the group phase”, explains the French coach, who insists that Nantes is not “boxing in another league” after having traveled to Cologne for the first time.

“There are clubs in Europe, like Barcelona, like Veszprem, who are built to win the Champions League.

“And we’ve a lot of work ahead of us to be at that level. We reached the top of the mountain last season, but we still have to improve to not fall back”.

Thierry Anti wants Nantes to keep their feet on the ground as he still believes that his team has to confirm previous achievements.

“We have new responsibilities – we can’t hide anymore. The goal we’ve set for ourselves – to become French champion – will force us to be rigorous. And this will pay off in the Champions League as well”, he assures.

Nante’s coach takes nothing for granted, but one thing is certain. Despite having to change arenas last season and after moving back to the recently refurbished Palais des Sports de Beaulieu – the hall holds 750 more than La Trocardière – fans continue to believe in the club.  Already there are 500 more season ticket holders compared to the previous year.  Still, Anti won’t get too excited.