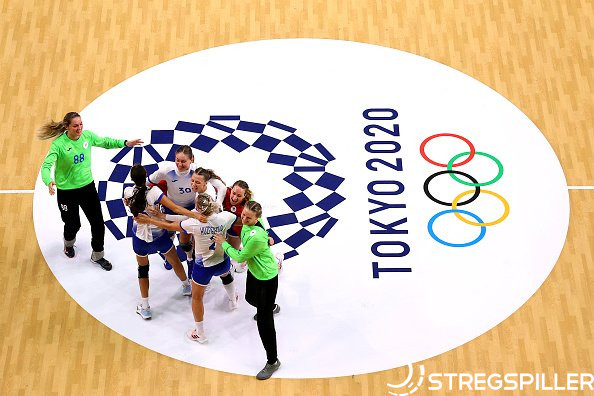 They did it again…

Determination and execution take Russia / ROC back to the Olympic final after a hard fought semifinal against Norway.

The widely anticipated semifinal would offer Norway a chance to avenge the one-goal loss after extra-time at the Olympic games in Rio 2016.

89% of the participants of the stregspiller.com snap poll saw Norway advancing to the final match at the Tokyo Olympics!

Russia opened a three-goal window shortly before the half  in a game Norway would not be able to turn around anymore.

A courageous defense effort and nine goals from Anna Vyakhireva laid the foundation of a compelling win, despite the early red card for Anna Sen.

Russia jumped to a quick two-goal lead against a nervous team from Norway.  Kari Brattset Dale scored the equalizer after 10 minutes (3:3), but Norway’s backcourt players found it difficult to score.

A red card in the 15th minute, when defense specialist, Anna Sen, hit Nora Mork in the face, marked a turning point in the first half.

Mork would score on consecutive 7-meter penalties and Skogrand’s shots from right wing found their target, after burning several good opportunities early on.

It took Norway five minutes after the break to tie the match again (15:15), but Russia responded with a 6:1 run of their own.

Kseniia Makeeva’s  fourth goal extended her team’s lead to six, the largest difference in the game.

Although, Norway outscored Russia in the remainder of the match (10:5), it left the winners of EURO 2020 one goal short of yet another period of extra time.

Nine field goals from right back extraordinaire, Anna Vyakhireva, and 11/28 saves from goalkeeper Anna Sedoykina explain some of the difference between the top teams at Tokyo’s Yoyogi arena.

A well organized defense by Daria Dmitrieva and Kseniia Makeeva (the latter did double duties after Sen’s early red card) was another critical piece of the Russian success story and Russia’s offense was clicking on a few more cylinders.

On the other side Nora Mork scored ten times, but six of her goals came from the penalty spot.  In short – breaking down Russia’s defense was tough never mind scoring from the backcourt.

The burden to make up for the missing fire power fell on Norway’s wing players on both sides of the pitch.  But, Stine Skogrand (4/9) and Sanna Solberg Isaksen (3/5) could not convert on a number of good shooting opportunities and Camilla Herrem, who was in the starting lineup, left the field early in the first half and never returned?!

A more than solid showing of Kathrine Lunde in Norway’s goal (35% saves) could not make up for the aforementioned deficiencies.

Former head coach, Yevgeni Trefilov expressed his thoughts in no uncertain terms when he said that his congratulations to Russia’s coach, Aleksey Alekseev, would have to wait until he wins the gold medal.

Alekseev’s performance on Friday must be encouraging and he certainly is on the right track to receive the accolades of his legendary predecessor if he and his team can deliver an encore result on Sunday.

Aside from preparing his squad for the bronze medal match against Sweden, Norway’s head coach, Thorir Hergeirsson, had to face the question why he stuck with Stine Skogrand on right wing throughout the semifinal instead of opting for Marit Jacobsen when the former was struggling?

Could Kristine Breistol have made a difference on the left-back position as well?  For now, such answers are a mute point, but possibly food for thought for games to come.

Always a sensitive matter, but especially when the referees hail from the country that already qualified for the Olympic final.  Yet, Julie and Charlotte Bonaventura were not to blame for the result of the match.

The French twins executed this game of handball as good as any before, although critical remarks were expressed by several Norwegian players after an undoubtedly hard felt loss, shortly after the final whistle.

Vladlena Bobrovnikova (left-back Russia, when asked about Makeeva’s efforts on both ends of the pitch)

“Actually, it’s a very difficult Olympics – there are many girls who we have no substitutes for,  It’s some sort of madness that we made it to the finals.”

Stine Oftedal (center-back Norway, when asked about the performance of the two referees)

“I think it was very frustrating. I think they (Russia ed.) get to play extremely long (in attack ed.), and I think they get to do that extremely often.”