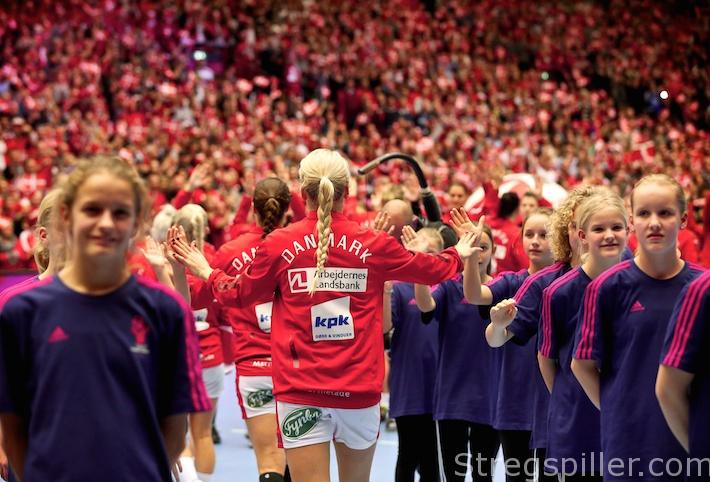 FEATURE – Jesper Jensen, the new coach of Denmark’s women’s handball team firmly believes he can take the team to the next level and fight for medals at major tournaments, once again.

He also admits that he doesn’t have a scripted plan yet and that he’s “a bit annoyed” that not every one of his Danish coaching colleagues is happy with his nomination.

It came to no surprise when Jesper Jensen was announced as new head coach of the Danish women’s national handball team.  The DHF signed a contract for the next three years with the current coach of Team Esbjerg.

After the experience with Gudmundur Gudmundsson on the men´s side, it was expected that the Danish Handball Federation would not take chances and sign another foreigner.  And, as Kim Rasmussen, the former coach of CSM Bucuresti and the Hungarian national team, was not considered, Jensen ended up as the remaining candidate.

He did not hesitate, when the offer was presented.

“I find it a very interesting and challenging job. There is plenty of talent and potential in women´s handball, in Denmark, and I am very much looking forward to our first national team get-together later this month and to the test matches against Brazil.

“As we rarely meet (with the national team ed.), we need to work with high intensity on such occasions,” Jesper Jensen tells stregspiller.com.

42-year-old Jesper Jensen was a brilliant playmaker in Skjern Håndbold and the Danish national team and he was one of the very few Danish, top players, who never went abroad.

As a coach, he gained experience in Vejen EH, a club long gone from the women´s league and in Aalborg on the men’s side, before joining Team Esbjerg, in 2017. There he began as assistant, but it wasn’t long before he assumed the responsibilities as head coach. Jensen has the highest coaching degree there is – the EHF Master Coach.

Lars Jørgensen, a former Danish international himself, will continue as Jensen’s national team assistant on a full time basis.

“I have my experience as player and coach to offer, as well as my ideas and philosophy – I feel well equipped for the job, says Jesper Jensen, without going into the specifics what his “ideas” for the national team are.

“For instance, I cannot say yet, if I want to execute an aggressive defense formation or play seven-against-six or something like that.

“First, I will get an overview what the strengths and weaknesses of the various players are and who fits in where, before I announce any more detailed ideas.

“However, I am in no doubt that Denmark has the potential to compete with the top teams in international women´s handball.

“I do realize, of course, that the top includes many teams that are very close. A good example is the recent World Championship, where Denmark defeated the Netherlands.  Eventually, the Netherlands finished as World champions, while Denmark ended up ninth.

“This proves the point that Denmark can play for medals and that’s my goal, he says.

His predecessor, Klavs Bruun Jørgensen did not manage to reach this objective and as a consequence it cost him his job, back in January.

What can Jesper Jensen achieve that Bruun Jørgensen didn’t?

“I don’t know yet. May be it’s just a few elements which need to change. As the international top is so close together, it may only take some small adjustments to climb up the ladder,” says Jensen, who certainly took Team Esbjerg to a next level.

Already, two match days before the end of the main round in the 2019/20 DELO EHF Champions League season, Esbjerg secured a spot in the quarter-finals.  And, a win at home against Metz Handball this upcoming Sunday, could take them to the very top in their group.  Thereafter, the FINAL4 is not far away.

At the helm of the national team and as coach in Esbjerg, he will be performing double duties for the time being.

“Of course, it will be tough at times, especially right now, when I have to concentrate on the work as national coach in the middle of an important period in the Champions League.

“However, it will be extremely interesting and inspiring to work with the best players on both levels, and I am sure my work with the national team can benefit from my experience as club coach,” he says.

His new employer has no objections.

“We have great confidence that he will put his heart and engagement 100% in Team Esbjerg, just as he will in the national team,” confirms Team Esbjerg’s chairman, Bjarne Pedersen, when Jesper Jensen was introduced as national team coach.

Not everyone in Danish handball is so upbeat about the appointment of Jesper Jensen as national team coach.

Some of Esbjerg´s rivals in the Danish league view it as having an unfair advantage.

“If Jesper Jensen tells a player “I want you to come to Esbjerg”, how should she react? It might be best for her to stay in her current club, but it is the national team coach, who’s asking and the player may boost her chances in the national team just by changing clubs,” explains Claus Mogensen, while Mathias Madsen (coach of Herning Ikast) goes even further.

He is concerned that Jensen could use the information Madsen provides him with about his players, could be used when the two clubs battle it out in the league.

“Jesper Jensen will be able to use the information tactically, when we meet his team,” says Mathias Madsen.

“I find this attitude a bit annoying,” is Jesper Jensen´s reaction towards stregspiller.com.

“Club coaches should keep in mind that in my job as national team coach, I am also developing the strengths of their players.

“I think they should have some trust in my integrity and give it a chance,” he concludes.