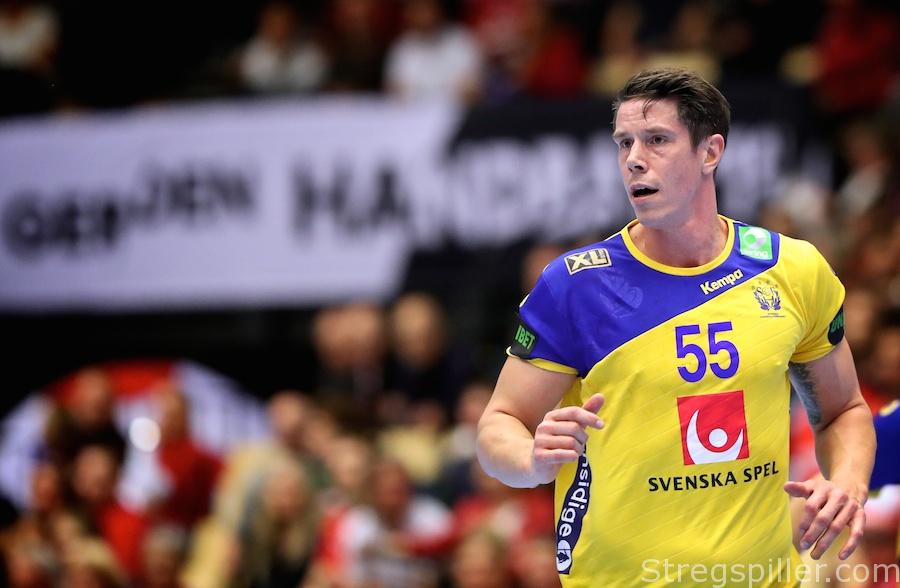 “They will have to throw me out”

INTERVIEW – In the world of international handball, he may well be the number one comeback kid – Kim Andersson has returned to the Swedish national team once again and even at the age of 36, he makes his presence felt at the ongoing World Championship, in Denmark and Germany.

Stregspiller.com met the humble star player for a talk about past, present and what the future will hold.

He is the handball’s version of Frank Sinatra.

Just like ‘Old Blue Eye’ bid farewell more than once, only to return to the stage time and again, Sweden’s Kim Andersson announced his retirement from the national team several times before, only to come back at a later point.

One of the best handball players the world has ever seen, Kim is doing his part at the 2019World Championship, where Sweden remains unbeaten so far.  On Saturday evening, the Scandinavians ran over Tunisia (35:23) in their first main round match.

Andersson’s passing still has surgical precision and he can shoot again, as his shoulder problems appear to be a thing from the past.

“For 60 minutes, we played a really good game against Tunisia. We may have started a bit poorly, as we didn’t really get a grip on the match in the first 10 minutes, but from then on, it was our game.  And, I think, we stayed calm and believed in what we do. That led us to our 12-goal win, which was really nice,” said Kim Andersson, as stregspiller.com caught up with him, right after the match.

“In general, the World Championship has been superb for us so far. We have been playing our preliminary group in Copenhagen in front of 10-15.000 Swedish supporters in every match, and that has been a crazy experience. That’s the way handball should be and that’s the way enjoy it.

“Now, as we have moved to Herning, things are a bit different with fewer Swedish fans in the stands but several thousand of Danish supporters, instead.

“We should not allow ourselves to be impacted by it, but focus on playing some good handball,” finds Kim Andersson, who is happy with his most recent comeback in the national team.

“You should never say never again! I have lost count on how many times I have ended my national team career, only to start again.  But, I simply love to play handball and I also love to play at top level every now and then, and that’s the reason why I am back in the team.

“It’s great fun to be back, as I am playing together with some really great guys. The chemistry among us is top notch –  I am very happy to be part of it, one more time and I simply try to enjoy it as much as possible,” he says.

His latest appearance on the international handball stage was three years ago with KIF Kolding Kobenhavn, a club he joined after a tremendously successful stint at THW Kiel.

Yet, his career at the Danish powerhouse didn’t last very long, due to ongoing problems with his left shoulder.  In fact, the health issue was so severe, it prevented him completely from shooting the ball for a while.  Judging by his recent performances at the World Championship, such troubles seem to be a thing of the past.  Against Tunisia, three of his four goals were the result of some powerful jump shots.

“Well, let’s take it easy, when talking about this matter – shall we,” he says with a laugh.

“Lately, my shoulder has felt fine and this may well be the reason, why I can be back in the national team. The injuries I have had in the past, and the fact that I seem to be fit, just make me happy and allow me to be part of it all once again,” says Andersson who has been playing for Ystads IF in the Swedish league since his return in 2015.

He is playing in the town, where he was born and raised and in some way he has come full circle.

“Obviously, it’s good for me that the physical strain is not as hard in the Swedish league as in the Bundesliga, for instance.

“But, even though the Swedish league is not as good as the Bundesliga or the Danish league, I still play 60 minutes in each and every match, so there is still some stress involved.

“In the morning, I  train on my own, and that’s what made it possible to come back, the way I did.

“Right now, I just enjoy being able to – and being allowed to – play yet another World Championship. That’s really cool,” he says.

So far, it has been smooth sailing for Andersson and his Swedish teammates at World Cup’19, but that’s about to change soon, as their remaining two main round matches will define and decide their near term future in the competition.

Norway and Denmark – in this order – will be the next opponents in two Scandinavian derbies on Monday and Wednesday.  The outcome of these games will determine which two teams will proceed to the semi-finals, in Hamburg, this upcoming Friday.

“Of course, our most difficult tasks are still ahead us.  It will start against Norway, who have a really good team, when you look at the players they have. Furthermore, they run all the time – they run 60 minutes in every single match!

“However, we have also played some fine handball in our first six matches, even though we may not have reached our absolute peak, yet. We have done all we could, to put ourselves in the best possible position. Now, we will have to see how things turn out in our last two main round matches.

“It’s still far too early to think about a trip to Hamburg for the semi-finals Right now, all we are focusing on is our next game, and that’s against Norway.  At the moment, there’s nothing else on our mind, other than this match,” Kim Andersson assures.

As he is 36 now, how much longer will he continue playing handball?

“As long as I am allowed to!

“The will have to throw me out – it’s that simple,” concludes Kim Andersson.