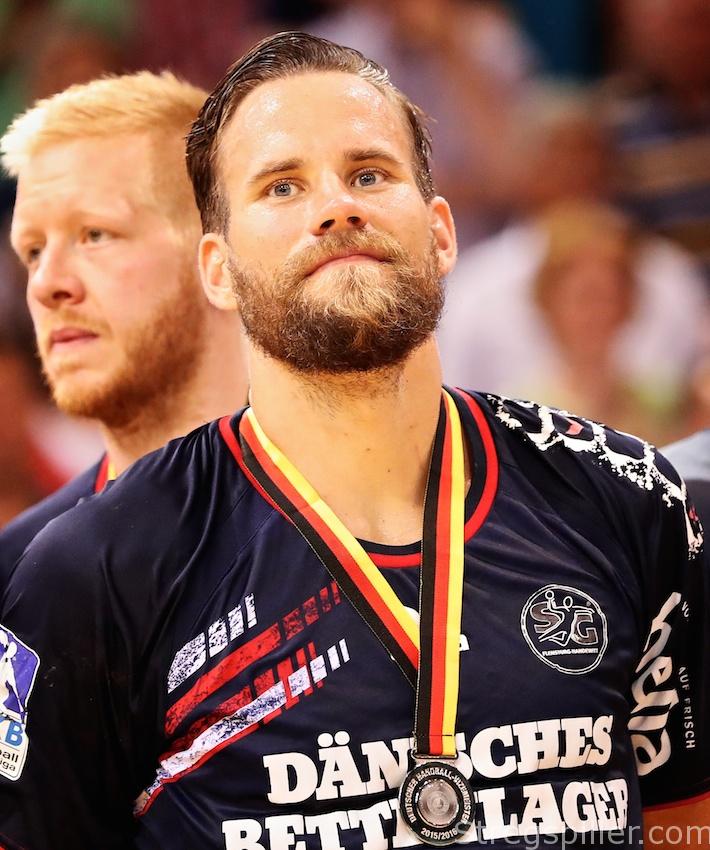 “Some things in life are more important than money”

INTERVIEW – Thomas Mogensen is celebrating his 10th season with SG Flensburg Handewitt, confirming that money is not everything in life.

At the start of his 10th consecutive season with Flensburg, life on and off the handball court is more complete than ever for 33-year-old Thomas Mogensen, as he reveals in this exclusive interview with stregspiller.com.

Don´t we hear the same cliché every time a player transfers to a new club – be it in handball or any other professional sport? “I see some interesting new challenges at “abc” club” or, “I believe I can develop even further in “xyz” club”, are the familiar press release statements.

Wouldn´t it more refreshing to hear a player admit to the true motivation of switching teams?

“I was offered more money here than by my former club”, would be the statement that more accurately reflects the real reason for changing squads in 90% of the cases. There is nothing wrong with it, so why not admit it?

As a top athlete, you only have so much time to make money and no one can blame you from making as much of it, while you can. There are exceptions, though.

When Anders Eggert will be joining Skjern – he leaves Flensburg after this season – he will definitely not be increasing his income.

And when Norway’s super talent, Sander Sagosen, has chosen to stay another year with Aalborg before joining Paris Saint-Gemain, it is because he knows that he has a better development path in the north of Denmark.

And then, there is Thomas Mogensen. It sounds believable when he states that money is not everything to him.

He has stayed faithful to SG Flensburg-Handewitt for nine years now, and it is no wonder that the Dane is happy to celebrate his 10th season with the team.

It’s not a a strange thought if a former Champions League winner, World Championship and European championship silver medalist could make more money elsewhere than in Flensburg, a club that is not known to be among the wealthiest employers in the world of handball.

“Of course, there have been approaches from other clubs, but none of them have really appealed to me.

“Probably, I could have made more money elsewhere, but there are actually things in life that matter more to me than money,” says Thomas Mogensen.

“To me, it is at least as important that I feel well as a person, and that my family feels well.

“I could never be sure, that my family and I would be able to settle down somewhere else, no matter how big the money would be.

“In Flensburg, we have found what we were looking for, and that is why I have stayed for all this time,” explains the 33-year-old Danish playmaker, who left Danish GOG for Flensburg in 2007 after winning the Danish championship with teammates like Mikkel Hansen and current women´s national coach Klavs Bruun Jørgensen.

Plenty of Danish ambiance in Flensburg

One reason why Thomas Mogensen and so many other Danish players have felt at home in Flensburg has something to do with the club’s small town location just south of the Danish border.

In Mogensen´s case, yet another factor has played a critical role. “It (the town of Flensburg ed.) reminds me a lot on GOG, where I came from.

“There as a bit of the same atmosphere here in Flensburg – it’s a bit of a “village club” – just like GOG.

“As in GOG, everyone seems to know one another and care for each other on and off the court, and this definitely appeals to me and has been one of the reasons why I have chosen to stay as long as I have.

“One more reason why I like the club so much has to do with the fact that I have never been missing court time during all my years here in Flensburg.

“In a stronger and wealthier organization, I might have spent much more time on the bench than here, where I have been considered a key player, practically all the time.

“This also means more to me than money.

“Furthermore, my family is happy here as well – my wife with her studies, our oldest in school and our youngest in kindergarten.

“I simply function better on court, when my family life is well and harmonic,” says Thomas Mogensen.

But, it has not always been this way, he admits.

“When I was still playing in the Danish national team, there was too much stress. The pressure hit me, physically and mentally.

“All respect to those players who can handle the national team along with their club responsibilities. For me, It just became too much.

“I can feel that I have considerably more resources now – physically as well as mentally. The decision has been good for me personally; it has also been good for my performance on the court”, says Thomas Mogensen, who said goodbye to the national team after winning the silver medal at the European championship on home ground, in 2014.

But how does he feel when he sees the Danish national team winning historic, Olympic gold in Rio?  Would he not have liked to be part of the success story?

“I would be lying, if I claimed that I did not wish that I was part of it, when the fun games began, but in this situation, I had to remind myself at what cost it would have come.

“I remember well, when I was running “empty” – physically and mentally – at the end of the previous season. Playing the Olympics would have cut down on almost all of my summer holidays, as the preparations for the new season started at the beginning of July already.

“I did get a call from Gudmundur (Denmark´s national coach Gudmundur Gudmundsson, ed.) when Rasmus Lauge (Mogensen´s teammate in Flensburg, ed.) was injured, and there was a shortage of playmakers.

“However, I did not even feel tempted, as I knew of the physical and mental toll.

“Furthermore, I would not have considered it to be fair to all those players who have worked so hard to get nominated,” says Thomas Mogensen who does not want to comment on the performances of the Danish playmakers in Rio – Morten Olsen and Mads Mensah Larsen.

“I do not think it would be correct for me to criticize former teammates who are playing the same position that could have been mine,” he says.

During the two years, that have gone by since Thomas Mogensen quit the national team, Danish handball fans could have very well re-written the Simon and Garfunkel hit, “Mrs. Robinson”, and singing: “Where have you gone, Thomas Mogensen? A nation turns its lonely eyes to you!”

The Danish national team was really missing Mogensen´s qualities in the playmaker position for a long time after his farewell – but may be not any more.

The performance of Morten Olsen and Mads Mensah paved Denmark’s way to Olympic gold in Rio. Now it’s very clear that others have taken over, and when Rasmus Lauge returns from injury, the playmaker position in the national team appears to be in safe hands.

And that is good news after all; as there is no chance that Thomas Mogensen will be wearing the national team jersey ever again.

“I have said goodbye to the national team for good.

“The only event that might tempt me would be the Olympics, but I will be 37 at the next Olympic Games.

“Furthermore, I do not think the national team should be some kind of buffet, where you can come and go and grab what you like and then leave the rest (i.e. World- or European championships) to others. This would definitely not appeal to me.

“Besides, I still meet all the top players in the Champions League – especially, when I consider the group we are in this season. It includes almost all the top stars of the world.”

“I am in no doubt that Champions League and Bundesliga will represent sufficient challenges for me in the future.” he says.

Seven-against-six – give it a chance

Last but not least, we also needed to talk about the modified seven-against-six rule, which has become the most debated and most controversial new piece of regulation in handball.

“Of course, it is revolutionary for handball as we know it, but I think much of the resistance comes from the preconception “why spoil handball, a sport that we love so much as it is?”

“I think we should wait and see what it (the new rule ed.) will actually mean to handball. I do not think we have seen enough yet to really judge its significance.

“We will have to see how it is used, and how the teams adapt to it, before we reach a final verdict,” finds Thomas Mogensen,

His coach, Ljubomir Vranjes, has stated that he is no fan of the system, and that he does not expect to use it much, if at all.

“Well, let’s see. There may be times, when it comes in handy,” says Thomas Mogensen before starting his 10th season with Flensburg-Handewitt.