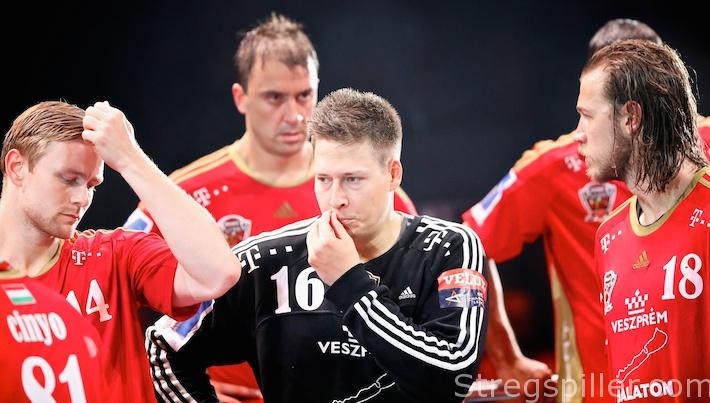 Third time is a charm – maybe not

Hungary’s Veszprem already looked like the champion of Europe, but shockingly wasted a 9-goal lead in the most dramatic Champions League final to date, losing to Kielce in a penalty shoot-out.  It was a heartbreaking loss for the club and its fans, the “red Hungarian army”, who once again had traveled to Cologne to see their heroes win – finally.

But the historic match highlighted Veszprem’s biggest problems, age and depth.  Poor Aron Palmarsson was left alone, because Momir Ilic and Laszlo Nagy ran out of gas ahead of time.  A back-court any coach would dream off, suddenly fell apart.  Ilic, 34 years old, and Nagy, 35 – the face of Hungarian handball for many years – both of them are still there, and so is Palmarsson.

The club was smart enough to invest into a deeper squad to avoid a similar collapse this coming season.  Marko Kopljar, although I don’t rate him as highly as many others do, should take some burden off the shoulders of Nagy, while Ivan Sliskovic, already with Veszprem last season, should get more playing time behind Ilic.   And hopefully, Chema Rodriguez will be fit enough to form a great tandem with Palmarsson.

For now, it all looks good on paper and another “problem” was solved as well, when Slovenian Dragan Gajic joined Gasper Marguc on Veszprem’s right wing.   Cristian Ugalde is still the only player of top class on the left side of the court, with all due respect to Gergő Iváncsik.  Veszprem will have a problem if and when Ugalde suffers an injury.  In case it does happen they may have to bring in a replacement.

Another soft spot seem to be the line-players.  Andreas Nilsson improved drastically last season – his second one in Hungary – but he is all by himself.  I don’t see Renato Sulic on the same level, even though the Croatian offers plenty of experience.   He should be seen as a very good addition to Nilsson but I’m not totally convinced  – Sulic will be 37 in October.

In goal there’s probably no doubt that Mirko Alilovic and Roland Mikler can always win a game for the team.  But if they don’t, if they really can’t get into a rhythm, then my impression is that both are so distracted that it could become a problem for Veszprem’s defense.  About 95 percent of the time, either one of them is good enough, but what about the other 5 percent?

Again, the remaining 5 percent of uncertainty will hardly inflict pain, as Veszprem’s defense is rock solid.  It’s tall and strong – getting around Ilic, Nagy or defense specialists Timuzsin Schuch is extremely difficult.  The best way for opponents to create scoring opportunities is speed.  Smaller and quicker players can cause trouble for Veszprem, as the squad is not the fastest team in transition.

It will be very interesting to see how the team does under new coach Javier Sabaté, who took over from Carlos Ortega, early and unexpected in 2015.  Now, Sabaté will be able to prepare the players for the first time the way he likes it, although I doubt it will be much different from Ortega’s methods.

The first hurdle was a tall one – it’s not easy to win in Flensburg.  Paris, Barcelona, Kiel, it won’t get any easier in the group stages. Along come tough road trips in the SEHA- and more games in the Hungarian league.  Fitness at the end of the season will be the main issue.

I think the team brings too much quality to the table to miss the Final 4.  But it remains to be seen if the third time in a Champions League final will be a charm.  If they get there, the players won’t concede a nine-goal advantage again. But will they lead by nine goals ever again?  I think the club can book tickets to Cologne, but should wait changing the letterhead.  They know why.