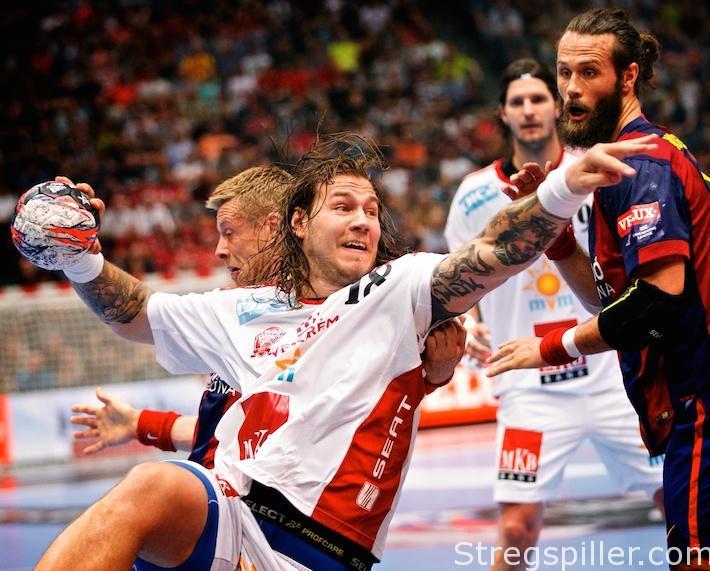 Vardar was trailing by three goals going into the second leg of the Champions League quarter-final match against Veszprem.  Given Veszprem’s solid track record on home ground, the odds were firmly stacked against the team from Macedonia.

Veszprem could take comfort in the aforementioned “goal-cushion” as well as their frenetic supporters that showed up in full force at the arena.  Both clubs were able to present the same lineup’s as a week ago when they met in Skopje.

If some had thought that Vardar would quickly turn into a meting ice cube, in the heated atmosphere at Veszprem arena, was in for a surprise.  From the beginning of the game, the squad of coach Gonzalez applied pressure on Nagy & Co. and jumped to an early lead that they took into half-time.  Veszprem’s fans had to wait until the 38th minute before Mate Lekai was able to secure the first one-goal advantage for the Hungarian champion.  Still, Vardar continued to fight courageously until the very end, giving Veszprem a run for their money.  The entry ticket to the FINAL4 in Cologne came at a price for the crew of coach Xavi Sabate; it wasn’t cheap, but in the end Veszprem secured their third consecutive appearance at the Champions League season-ending tournament.

Left-wing, Timur Dibirov, arranged for an early Vardar lead that his team would not give up until some time into the second half.  Backed by a crisp 5:1 defense, the club from Skopje appeared somewhat fresher and more concentrated in the opening rounds of what, at times, looked like a fight between two heavyweight boxers.  Both clubs’s found it difficult to keep their six field players on the court.  For 22- of the 60 minutes regulation time, the coaches of both squads had to make do with at least one player less on the pitch.  It took Veszprem until the 11th minute before Laszlo Nagy recorded the first goal that was not a 7-meter penalty shot.  Veszprem’s game in offense lacked rhythm and Vardar was able to take advantage, maintaining a two-goal lead at the break.

The picture quickly changed when the two teams returned to the pitch.  By minute 36, Aron Palmarsson drew even and four minutes later, Mate Lekai had arranged for Veszprem’s first lead of the match.  Mirko Alilovic, tending the goal of Veszprem stepped up his game and on the other end of the court, Nagy and Illic could extend the advantage to two-goals but no more.  Vardar was hanging tough and not intimidated by the vociferous crowd.  Three minutes before the final buzzer – Matjaz Brumen’s first of his two goals – had brought Vardar back into the lead (29:28).  For a moment, it looked like the club from Skopje could open the “door to Cologne” but the outstanding Momir Illic shuttered any emerging hopes by scoring his goals seven through nine.

Momir Illic – the Serbian left-back delivered another superb performance scoring a game-high nine goals. In the final minutes of the match he single-handedly assured Veszprem’s return to the Champions League FINAL4 tournament at the end of May.

Zigmar Sondors and Renars Licis (Latvia) had their work cut out.  From the get go, both teams fought hard for every possession of the ball, stretching the boundaries of fair play.  While the suspension minutes did not reach the dimensions of the Champions League match between Kielce and Flensburg, earlier in the week, the two referees had to send off players for a combined 22 minutes of playing time.  But unlike their French colleagues in the game Kielce vs. Flensburg, Sondors and Licis kept the match under control until the very end.  Not an easy accomplishment in on one of the Champions League loudest arenas – chapeau!

The club from Hungary scored five times while being “man down”- Illic’s goal in the dying minutes of the match was testament to the individual class of Veszprem’s veteran players when the going gets tough.

#HelloCologne – for a third time in a row, Veszprem is making the trip to the mecca of club handball – the EHF FINAL4.  Third time’s a charm?  It remains to be seen – the match against Vardar has shown that Veszprem’s experience and physical presence can be overwhelming in one game.  Can Nagy & Co. produce the same kind of performance in back-to-back games?  Veszprem knows the drill in Cologne – no doubt – but they will have to dig deep – very deep to bring back that desired trophy.  Time is certainly not on the side of Momir Illic, Laszlo Nagy et al – now or never?  Answers to be provided on May 28-29.

Vardar gave it all they had and then some, in the quarterfinal matches versus Veszprem. They will do it again in the 2016/17 season, when two handball powerhouses clash once again in the league of champions.