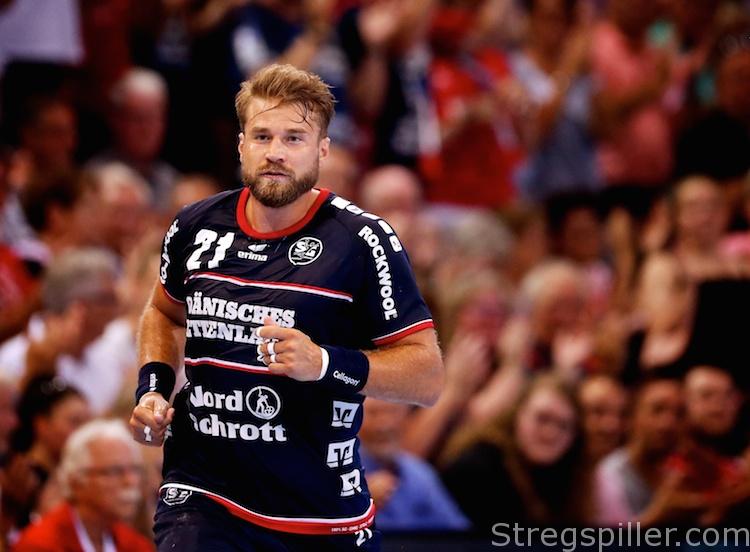 “This is not a step down”

The 31-year-old German line player is determined to become part of Ribe Esbjerg´s anticpated rise to the top of Danish handball and European glory, as he assures stregspiler.com in this exclusive interview.

Eyebrows were raised in German handball this past winter, when Jacob Heinl announced his departure from SG Flenburg-Handewitt after 24 years with the club – Heinl and SG Flensburg were two sides of the same coin.

And a few more eyebrows – this time outside Germany – were raised earlier in the summer when it became known that Heinl´s new club would be Ribe Esbjerg – a team that did not even qualify for Denmark’s championship play-offs last season; never mind any European competitions.

Still, the former German international did not have to think for long, when approached by the club from Western Jutland.

“I felt that I needed to see something else aside from Flensburg and that it was about time.  After having talked to Ribe-Esbjerg´s sports director, Sune Agerschou, head coach, Lars Walther, and board member, Johnny Nim, I was in no doubt.

“The project in Ribe-Esbjerg appeals to me and so do their ambitions. Furthermore, it’s an advantage that it is not far from Flensburg,” says Heinl after he signed a three-year-contract.

At first glance, the transfer looks like a considerable step down for a player who will be turning 32 in October, and after celebrating the 2018 German championship with Flensburg less than three months ago.  However, he does not see it this way.

“Do not underestimate the Danish league – I find it very strong.

“More than once have we seen Bundesliga teams in trouble against Danish clubs, in the Champions League and the EHF Cup.  More recently GOG and Holstebro defeated Flensburg in two (pre-season ed.) friendly encounters.

“Of course, I realize that these games were only test matches and that the German teams are focusing on the upcoming start of the Bundesliga season, but the results still sent a signal.

“You only have to look at the many players who joined Bundesliga clubs straight from the Danish league and become immediate reinforcements,  to convince yourself just how strong the Danish league is,” Jacob Heinl tells stregspiller.com.

“My ambitions are still intact.  In fact, that was part of the reason why I opted for this change.

“My body simply needed a break from the physical play in Germany’s Bundesliga – stress not only caused by numerous games, but from many long road trips as well.

“In Ribe-Esbjerg, we will be playing 20 matches or so before Christmas, while Flensburg will have played around 35 by that time.

“That says everything about the difference between the two leagues and the physical strain, I think.  Actually, I am sure this change can prolong my career,” he assures.

He could have stayed in Flensburg if he wanted to as general manager, Dierk Schmäscke, regretted his decision to leave.  But for Jacob Heinl the desire to try something new was too strong and for Ribe-Esbjerg he is the biggest name the club has signed so far.

Heinl has a point when claiming that he will be part of Ribe-Esbjerg’s ascend to the top in Denmark.  Ambitious, local sponsors have been willing to invest substantial sums in the handball organization, and Jacob Heinl´s former teammate in Flensburg, goalkeeper, Søren Rasmussen, is just one of several prominent additions in the upcoming season – Icelandic internationals Gunnar Steinn Jonsson and Runar Karasson being the two others.

Emotions in Ribe Esbjerg have run high after the club succeeded in securing the services of Jacob Heinl.

“We are incredibly proud having signed a player of this level.

“His achievements speak for themselves.  For many years, he has been an integral part of Flensburg’s central defense, and his qualities are extraordinary,” confirms Ribe-Esbjerg’s sports director, Sune Agerschou, the former goalkeeper of SC Magdeburg.

So far, Heinl shares the optimism.

“We only played a few test matches, but I think that things look promising,” he says.

Although, Jacob Heinl was determined to find a new challenge, he openly admits that leaving Flensburg was not easy.

“Of course, it was an emotional decision after 24 years with the same club.  I was certainly reminded of how big a step it was, when I attended the “Jacob Cement Cup” at Flens Arena, recently.

“For a change, I did not enter the arena through the players´ tunnel, but through the spectators´ entrance; watching the games from the stands was quite a peculiar experience,” admits Jacob Heinl.

“Actually, it’s difficult to point out what stands out as my best experience during all these years with Flensburg.

“Of course, winning the Champions League in 2014 was fantastic, and so was succeeding in the German championship in the spring of this year, but I think the many friends I made in Flensburg and all the great people I got to know has left the most lasting impression.”

One of four line players

His new club does not only have a less glorious history than Flensburg but a much shorter one to begin with.

Ribe may be Denmark´s oldest town, but the merger between Ribe HK and Esbjerg based, Sædding Guldager IF, occurred only in 2008. And since 2012 the club competes in Denmark’s top league.

Still, the objective is to win the Danish championship within a few years’ time and Jacob Heinl is seen as one the most crucial players in executing the plan.

The club strives to reach the top with a deep squad as Heinl is one of four line players this season.  The other three are former Slovenian international, Miha Zwizej, youngster, Jonas Tidemand and veteran, Søren Tau.

“In Flensburg, I competed with a number of line players and I think it is sensible to have enough players occupying this position.

“As a line player you take a lot of hits and since all players you mentioned also play in central defense where physical presence is a requirement, having numerous alternatives will serve everybody well,” says the experienced German who expects his new team to play a meaningful role among Denmark’s top teams in 2018/19 already.

“Teams like Skjern, Aalborg and BSV (Bjerringbro-Silkeborg, ed.) may still be a bit ahead of us, but I feel we will be ready to challenge them already this season,” promises Jacob Heinl.