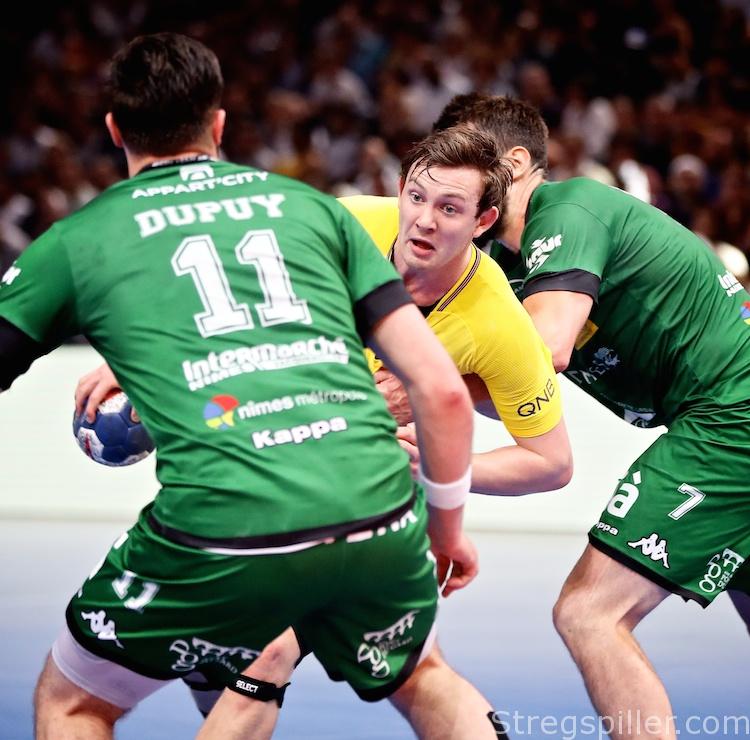 “This is what I went to Paris for”

INTERVIEW – Sander Sagosen is in for his first FINAL4 and in this exclusive interview with stregspiller.com, the young Norwegian star from Paris Saint-Germain doesn’t hide the fact that playing the final weekend of the Champions League at Lanxess Arena in Cologne is what he went to Paris for.

Sooner than most expected did the versatile back-court player become a pillar in head coach, Zvonimir Serdarusic´s, lineup.  He is one of the players PSG will rely on heavily in their quest to win the 2018 Champions League, in the club’s third consecutive attempt.

For 22-year-old Sagosen, it will be the first time in his career that he’ll be entering the court of Lanxess Arena, the greatest event in club handball.

As is typical for the young Norwegian, he does not appear nervous at all.

“Playing the FINAL4 is simply something I am looking forward to – a lot.

“That’s the biggest event you can play in as a handball player and it’s what I went to Paris for in the first place.

“Competing in the FINAL4 including all the hype and the fantastic atmosphere will be just great,” Sander Sagosen tells stregspiller.com.

If he was considered a star before he arrived in the French capital nearly a year ago, it is fair to say that by now he is a super star.

From the start in the French capital, he enjoyed a lot of court time and while this came as a surprise to some of the pundits, it was less astonishing for Sander himself.

“I knew I would get court time here. Maybe I got a bit more than expected in the beginning, but that had something to do with the fact that it didn’t take me long to adjust to the team and finding my role.

“Now, I am well integrated in the squad and my first season has just been awesome,” he says.

“I feel I have further developed all my skills as a handball player during this first year at PSG, but I think that my defensive play has improved the most,” he explains.

“To a certain extend my improvement is based on practice, but also because of the number of matches we play here.

“This season, I have already played more than 60 games, while I probably competed in around 35 matches when I was in Aalborg.

“Of course, I had to get used to the increased number of games and it is definitely something that develops you physically, in addition to gaining more experience.

“Furthermore, we are being tested harder in most league matches here (in France ed.), compared to what I was used to in the Danish league – the level of play is simply higher.

“So, I do not think it is a coincidence that there are three French teams in the FINAL4 (PSG, Montpellier and Nantes, ed.)

“In fact, I think the French league has reached the level of the German Bundesliga,” finds Sagosen who is equally at ease as playmaker as well as occupying the left back position.

As mentioned already, the upcoming tournament will be PSG´s third FINAL4 in a row and in each of the two previous years, most – certainly a majority of – handball fans saw the French powerhouse as the odds-on favorite to win the title and this year is no exception.

But much to the disappointment and frustration of the ambitious Frenchmen, they have not succeeded, yet.

A third place in their maiden campaign in 2016 was followed by a loss in the final match last year, courtesy of Ivan Cupic´s last-second goal that handed Vardar a 24:23 victory.

Sander Sagosen can sense the team’s and the club’s eagerness to go all the way in 2018.

“Of course, I feel it in the team.

“We all are very determined that this should be our year and we can also clearly notice that the club wants us to win this time.

Obviously, we feel the pressure, but that’s only natural considering who we are. We are just as keen on winning the tournament as everyone else in the club is,” says Sagosen who feels the burden in other ways as well.

While taking aim at the Champions League title, PSG are also in a neck and neck battle with Montpellier HB to defend the French championship, yet another French team competing in this year’s FINAL4.

“I try to focus on one thing at a time and right now, I am focusing on the FINAL4, which is our next assignment.

“In the French league, we are in a situation where we need help from others to win the championship. (Such assistance was provided on Tuesday night, when St Raphael defeated league leader, Montpellier HB 26:25 ed.).

“I cannot really think of it, right now. I think about the FINAL4 instead where we still have our fate in our own hands,” he says.

With three French teams in the FINAL4, it’s inevitable that two of them will meet in the semi-final.  Those two are PSG and the FINAL4 debutants HBC Nantes – teams that know each other extremely well.

“I expect a tough semi-final between ourselves and Nantes.

“Nantes play a very physical game of handball, but we can play this way as well – so, I expect this aspect to be the decisive factor in the match.

“The FINAL4 may be a great event, often including intense matches, but it’s not always the best handball you’ll see there.

“To me it will not matter so much, if I can only lift the trophy with the rest of my team on Sunday night.

“That’s simply the greatest achievement you can dream of as a handball player,” says Sander Sagosen.