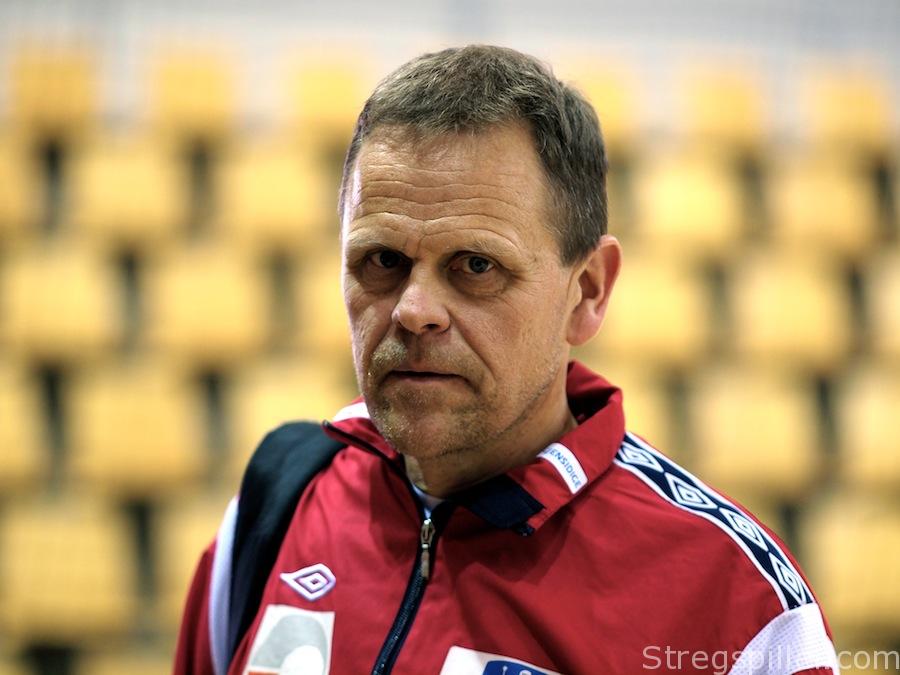 Challenges are nothing new for Thorir Hergeirsson ever since he became head coach of the Norwegian women’s handball team in 2009. His predecessor was nobody less than legendary Marit Breivik by many measures the most successful coach in Norwegian handball history to date. No doubt some big shoes to step into but Thorir started well with a 3rd place in the World Championship of 2009 in China.

During the European Championship of 2010 (co-hosted by Denmark and Norway) expectations were already running higher. Having dropped Linn-Jorum Sulland from the team in the earlier rounds of the tournament and after a disappointing loss against Sweden, Hergeirsson reversed his move and decided to bring her back for the final round in Herning against Denmark. It all paid off – Sulland scored seven goals in the semi-final game against Jan Pytlick’s team and Norway went on to win its 4th EC in a row beating Sweden in the final 25:20.

In the following year Team Norway travelled to Brazil attempting to win the 2nd World Championship trophy after 1999. This time Thorir was without long time team captain and leader Gro Hammerseng. Gro had announced her retirement from the national team earlier in the year. The “Gulljentene” had a very poor start into the tournament losing against Germany and triggering a media storm at home. Had Thorir’s girls lost their motivation and appetite for more titles? Ultimately, the answer was a resounding “No”. Hergeirsson was able to resurrect the team after its weak beginning and this time veteran player Kristine Lunde-Borgersen led Norway in the final win against France.

The 2012 Olympic Games in London were possibly the most challenging for Norway’s “Landslagssjef” to date. It all looked good from the outside. The team that won the World Championship in Brazil some months earlier had stayed together. Only keeper Katrine Lunde-Haraldsen had mentioned some lack of motivation at the outset of the tournament. What followed was a preliminary round that resembled a performance rollercoaster that neither the team nor the millions of self–proclaimed Norwegian head coaches were accustomed to in recent years. After the loss against Spain (20:25) in the last game of group play Hergeirsson saw himself with his back against the wall. Some were already speculating on who would become his successor. But once again Thorir and his coaching team were able to turn matters around. In the quarter-final against Brazil his faith in goalkeeper Kari Alvik Grimsbo made the impossible possible. By mid-way of the first half Norway was already on its way out from Olympic competition when Kari’s epic performance not only let the team advance to the semi-final – it had revived the fighting spirit of the squad and laid the foundation for winning the second Olympic Gold medal a few days later.

At the time of the 2012 European Championship in Serbia only seven players from the 2010 final were still part of Team Norway – still it was smooth sailing throughout the tournament until the final day on December 16, 2012 in Belgrade. Following the summer games in London Thorir Hergeirsson had to integrate a number of new players into the team. Kari-Mette Johansen had announced her retirement others had been injured (Kurtovic, Snorroegen), became pregnant (Grimsbo) or had been eliminated from the roster (Nostvold, Molid). The final game against Montenegro was a thriller that ended after double over time 34:31 in favor of the team of Dragan Adzic. In the decisive moments of the game the exceptional performance of Ida Alstad (11 goals) was not enough to defend the title.

In only four years as head coach of the most accomplished team in women’s handball Thorir Hergeirsson has won all possible trophies. How will he and his team do in December when they return to Serbia to defend their title as world champion?
In all likelihood the team will be much younger and not as battle hardened. Again he has to deal with the reality of injuries (team captain Frafjord, Kurtovic, Herrem) and the unexpected pregnancy of Lunde-Borgersen. The possibility of having to form a new defensive middle block is quiet real as Marit Malm Frafjord is unlikely to be back in time. Who will Thorir pick to fill the void?

Recently Isabel Blanco has thrown her hat in the ring and announced that she is looking forward to return to the team if she is called upon. She would be of help offensively as well and could take some work off Heidi Loke.

Will the coach tap Gro Hammerseng? She would be the most logical candidate to close the gap in the middle – and the only title that is not part of her collection is the one of World Champion. During the summer she reiterated that the national team is in her past but that was before the pregnancy of Kristine Lunde-Borgersen.

How will Thorir decide this time– go with a junior and less experienced team while risking an early exit from the tournament or try to bring back some veteran players and go for WC number three? On December 7, 2013 Norway’s quest for World Championship will begin with a “final” against Spain for winning Group C.