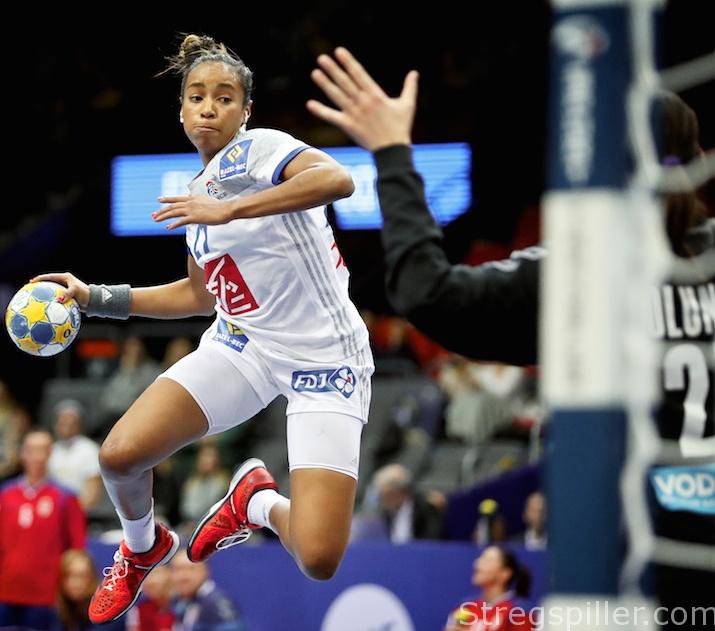 Three favorites and one surprise

While it does not come unexpected to see Norway, Netherlands and France in the semi-finals at the EHF EURO 2016, it is a surprise, possibly a sensation that Denmark has qualified for the “final four”.

Netherlands vs. Denmark and Norway vs. France.  These will be the last four teams at the Women´s European championship, while Germany and Romania will meet in the match for fifth place.

These are the facts after the final match day in the main round, on Wednesday.  In Group I, the Netherlands and France took care of business by defeating Spain and Serbia respectively.
In Group 2, Norway were already qualified, and Denmark booked the last semi-final ticket for Gothenburg.

The prospects were quite clear for the Netherlands.  A victory would allow them to fight for precious metal, no matter what the other results would be.
Any other outcome would force the Dutch team to wait anxiously until much later in the day.  Spain had nothing at stake anymore, but this was already the situation ahead of their previous game against Germany – still, the Spaniards managed to give the Germans a hard time, taking one critical point away from them.  Therefore, the Netherlands should not expect any gifts either.

The Netherlands are ready for their first ever European championship semi-final. But they had to fight hard, losing a five-goal lead along the way. Still, a convincing finish, secured a five-goal win. Estavana Polman led all scorers (10 goals).

The first 30 minutes became a rather tricky affair, with Spain being able to catch up every time the Netherlands appeared to pull away.
After being down 0:2, the Dutch went ahead 6:3, but Spain soon caught up at 6:6.
Danick Snelder & Co. increased their lead to 12:7 again, but they could only take a relatively narrow 15:13 advantage into half time.

The second half began as the first period ended, with Oranje being unable to shake off their opponents.  And after 13 minutes, Carmen Martin was able to equalize the score at 18:18.

Spain went back to a 5-1-defense formation, pushing Alexandrina Barbosa Cabral forward.  At the same time, Darly Zoqby de Paula did a brilliant job in goal, and with 16 minutes left, Spain even had the upper hand, when Cabral made it 19:18.

Polman – she led all scorers with 10 goals – reclaimed the positive goal-differential (21:20) and in the end, she and her teammates won by a comfortable  five-goal margin.

The Netherlands did not only qualify for the semi-finals, they also won Group 1 of the main round – the Dutch team could sit back and await their opponent from Group 2 in Helsingborg.

Denmark – as it turned out, the ultimate surprise team of the competition.

Spain’s European championship record only showed one win and one draw in six matches.  At the same time in Helsingborg, Russia wasted their last opportunity for a placement match and a possible direct World Championship qualification.  Coach Trefilov’s squad drew with Hungary – 26:26.

Assuming a victory, Germany could still reach the semi-final, provided France would stumble in the last match of the day, against Serbia.  This was Germany´s only hope after the Dutch win against Spain.

The Swedish host was expected to bow out of the competition gracefully, hoping for a positive result.

When you do not score a goal for 16 minutes, it is hard to win any handball match.  Sweden learnt this bitter lesson, as they were unable to dominate the scoreboard, in particular between minute 20 until six minutes into the second half.

During the same period, German turned a 7:9 deficit into a 16:9 lead, which decided the match and kept Germany’s semi-final hopes alive, at least for another couple of hours.

For most of the first half, there was no indication that any of the two teams would be leading by as much as three goals at half time.

But after Oden’s goal in the 21st minute (9:7), Germany scored five unanswered goals, leading by three before they headed to the locker room.

In Group 2 in Helsingborg, Denmark had a slight upper hand against Romania, keeping Cristina Neagu to only one goal – the Danes were ahead 12:10 at half time.

It took Sweden another six minutes to score again, before Nathalie Hagman cut the deficit to 10:16 on a penalty shot.
At this point, however, Germany had already decided the matter in their favor.  Sweden were able to fight themselves back into the game again, but they were without a chance to catch up with a big German lead.

The public announcer at Gothenburg’s Scandinavium kept saying that the winner would play for fifth place.
However, at this point in time, Germany still did have a chance to reach the semi-final!

Sweden exited the competition after a disappointing performance, when looking at the whole tournament.
One can only imagine, what Linnea Torstensson could have done for this team.

Meanwhile in Helsingborg, Denmark qualified for the semi-final against the Netherlands through a 21:17 win over Romania. Cristina Neagu scored only 3 goals.

In case of a win, France would earn the honors of playing the ruling World- and European Champion, Norway in the semi-final.

France did what they had to do, even though they surrendered a six-goal lead along the way, they still managed to pull out a decisive victory.

At the start, the match looked like a walk in the park for the French who did not need long to get up 8:3, 10:4 and 11:5.
However, five straight goals from Serbia brought the underdogs back (11:11) after 20 minutes, before France worked up a three-goal advantage at half time.

Serbia was able to hang with the 2016 Olympic silver medalist only at the beginning of the second period, when they reduced the deficit to 17:18.
However, France were physically stronger and as the game progressed the team of Olivier Krumbholz left no doubt, that they were heading to the semi-final of EUR 2016.

France is among the final four teams, but they will need a more consistent performance and improved focus during the next 60 minutes at EURO 2016, if they are going to stand a chance against Norway.