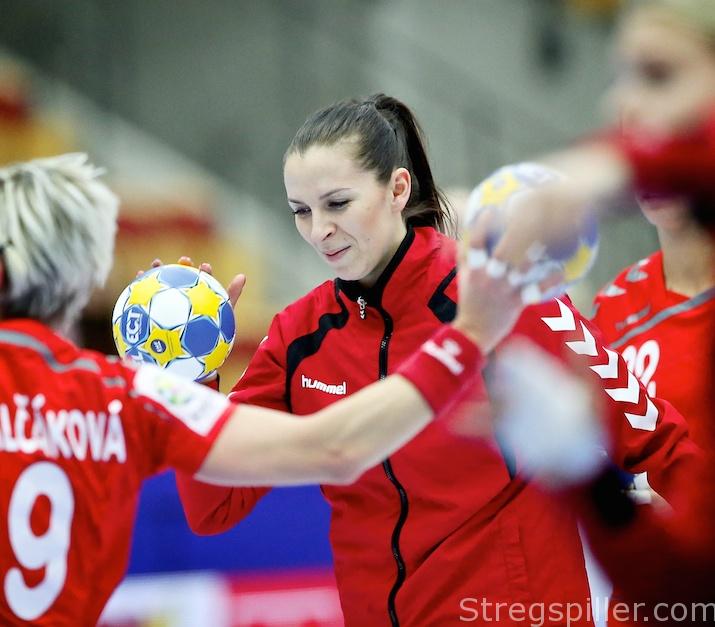 Iveta Luzumova was about to join Neckarsulmer SU, a team in the lower echelons in the German league system, prior to the season. But in the end she stayed with Thüringer HC – it was the right decision, for sure. In the Champions League, she is the leading scorer and in fantastic form. But what will she be able to accomplish at #simplywunderbar? I talked to her about the upcoming World championship and much more.

As you’re playing in Germany right now, is the World championship something special for you or does it feel like any other tournament?

IL: Of course it’s something special for me. Unfortunately I wasn’t able to play the qualification matches in June because of an injury and I had to watch from the sidelines how the girls fought to reach our goal. But they did and I’m very happy about it.

When I look at your performances in the Champions League you’re definitely one of the key players of your team. Do you feel any pressure or can you just go out and play, because nobody is expecting you to reach the semi-final?

IL: Right now, I don’t feel any pressure, but I’m sure I will very soon. At the moment, we are preparing for the tournament and everyone is relaxed. We want to reach the knock-out stage and we will do everything possible to do so.

Your style of play demands a lot of energy – does your club coach, Herbert Müller, have to worry that you will come back to Erfurt without any gas left in the tank?

IL: Yes, that’s true, it (the World Cup ed.) takes a lot of energy and I have to be honest, I already came to the national team without any energy, but with so many games coming up everyone will be tired towards the end. I hope I’ll get some days off after the tournament and then I will be at 100 percent again.

Your team is a mystery for many, only some names are familiar to a wider audience. Is there a player who can shock us in a positive way and possibly looking forward to a great future?

IL: Well, I think our opponents will take us seriously, because we only missed one European and one World championship since 2012. We have a great mix of experienced as well as talented players. I’m quite sure some of our younger players will have a great career. Some of them are already playing outside the Czech Republic, which is a good sign for Czech handball.

Is there a certain player you have in mind?

IL: We don’t like to talk about it too much, but our left-wing Veronika Malá (Issy Paris) and our back-court players Kamila Kordovska (HSG Blomberg-Lippe) and Markéta Jeřábková (Baník Most) are very talented.

You will be facing a number of good teams during the group stages. What makes you think of reaching the knock-out round, except for team spirit and the right attitude?

IL: Indeed it’s a very tough group; actually it’s the toughest one, with five teams from Europe. First, we will play against Argentina and then against Poland. I think we will be able to see where we are heading after these two matches. We improved our tactical preparation, we believe in us and I think we have enough experience in our team.

Certainly with the start of this season you have developed into a top player on the international level. But are you still watching other players during such tournament?

IL: Actually, I’m a little bit crazy, because I watch all matches from the Champions League and it will be the same during the World championship. Our group is really interesting when considering the names of the competitors. I like to watch playmakers such as Isabella Gulden, Stine Oftedal or Anita Görbicz. I will also follow my club teammates and root for them.

What will the host – Germany – be able to accomplish and who will win the title in the end?

IL: I think that Germany can go far if they avoid key injuries – the top six should be possible. The medals will be divided between Norway, The Netherlands and France, but it’s tough to predict which team will win what medal.