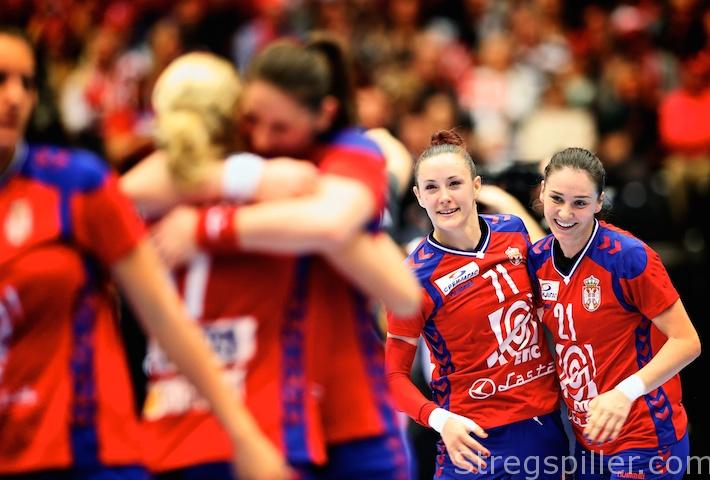 “Playing for Serbia is something very special”

INTERVIEW – When Kristina Liscevic feels the need to relax or to cheer up, she grabs her guitar.

“Music makes me happy and puts me in a fighting spirit,” as she reveals in this exclusive interview with stregspiller.com.

Fighting spirit – lots of it, plus an extreme will to win, that is the way we know Kristina Liscevic.

The 30-year-old Serbian international and playmaker of Ramnicu Valcea has her own special secret, to get into the perfect fighting spirit.

“I love to play the guitar. It’s my preferred way of spending my free time. I am not sure if I am particularly good at it, but I like to play and write songs.

“That’s the way I charge my mental batteries – it allows me to return to the (handball ed.) court happy and it helps me build up my fighting spirit,” Kristina Liscevic tells stregspiller.com.

So far, this recipe has helped her new team, SCM Ramnicu Valcea, to secure first place in the Romanian league, where the defending champions won their first eight matches before suffering a surprising 24:19 defeat on the road to Bistrita, a club from the middle of the league table, this past Tuesday.

This mishap aside, eight straight wins this season even included a victory against CSM Bucuresti, the very club that used to be the number one team in Romania.  Did the balance of power change in women´s handball in Romania?

“At least, it‘s our goal to become number one in Romania – I still remember our 20:19 win against Bucharest on September 21st very clearly.

“The support we received from our fans in that match was simply incredible.  In general, our fans are awesome.

“I have never experienced a crowd as noisy as the spectators in our arena. With that kind of support, anything is possible,” Kristina Liscevic is convinced.

If anyone can judge fan behavior across European handball, Kristina Liscevic certainly is the right person to talk to. Having played in Macedonia, Russia, Hungary, France, Denmark and now Romania, she has seen most arenas in Europe.

“I do miss Esbjerg, but I came here to be closer to my family.  So far, joining Valcea has just been one more beautiful experience.

“Of course, there are many new players who need to get adjusted to the team and I still cannot compare my role with the role I had in Esbjerg, where I functioned as playmaker more or less all the time.

“We’ve had our ups and downs, but I sense that things are running better and better.”

Trouble in the Champions League

The ups and downs have been just as obvious in the Champions League as in the domestic league, as of late.

Ramnicu Valcea started their Champions League comeback after a six year absence with a clear 34:27 win at home against the German champions from Bietigheim.  But, then three losses followed the initial success.

The road game against Brest Bretagne Handball was a lost cause (37:24), in addition to two successive defeats against Buducnost, 23:19 and 21:20 at home.

“Yes, it’s correct that we have had our ups and downs in the Champions League.

“However, we found some encouragement in our most recent match at home against Buducnost, which we only lost narrowly and a game we could have possibly won.

“That match served as confirmation as to how strong our defense has become.  That’s something we will take with us going forward,” says Kristina Liscevic before commenting on arch rival, CSM Bucuresti.

“Concerning Bucharest – it depends a lot what you know about them.

“Bucharest´s opponents in the Champions League don’t get this opportunity and Bucharest are so strong and have so few weaknesses that you have to play against them quite a lot before you spot their weak points.

“That said, Bucharest really deserve to be where they are. I know how hard they work and how dedicated they are – they really are a great team.”

Return to the national team

Besides her efforts in Valcea, Kristina Liscevic also has her focus on the Serbian national team, once again.

She was part of the biggest achievement in the history of women´s handball in Serbia, when she won the silver medal at the 2013 World Championship, on home ground.  But for several years, she has not been called back to the team until recently.

“Actually, I never realized that I was out.

“I was just not called up for some time and I got no explanation why the national coach did not want to make use of me.

“Now, he (Ljubomir Obradovic, ed.) has found use for me again and for obvious reasons I am happy.

“Playing for Serbia is something very special, especially now that the World Championship in Japan is coming up next month.

“I only hope we can do better than usual at major championships.

“Serbia usually has a great start, only to drop out as the tournament continues.

“I hope we can show some more stability and staying power this time.”

Before she thinks any further about the World Cup, two critical Champions League matches are coming up.

With only two points, Valcea are still struggling to proceed from the group phase and Sunday’s game against Bietigheim will define their prospects.

“Of course, that match is crucial.  Despite our clear win at home, there is no doubt that it will be difficult in Germany but, I hope our strong defense can get us through,” says Liscevic, who dreams of bringing Champions League glory back to Ramnicu Valcea as the club has a proud tradition in the competition.

Back in 2010, the team from Romania’s Valcea region even reached the Champions League final, where they succumbed to Viborg HK, and as late as 2013, they were in the semi-final, where they only lost by one goal on aggregate against Györ.

“I do think our team has the potential to go far in the Champions League – maybe already this season.

“Obviously, we all dream about going to Budapest and play the (Champions League ed.) FINAL4, but I could mention quite a few more teams who have the same dream,” says Kristina Liscevic.