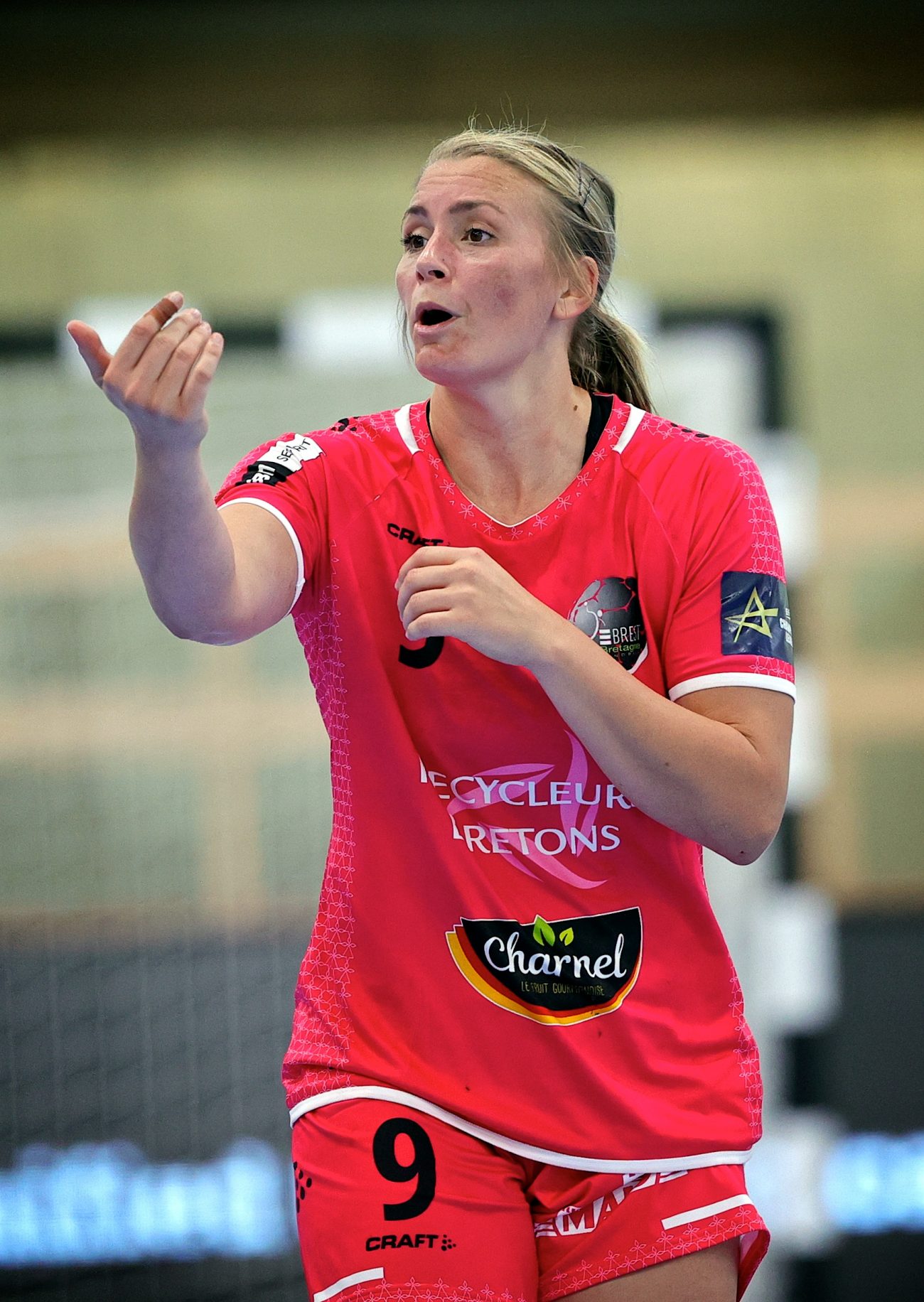 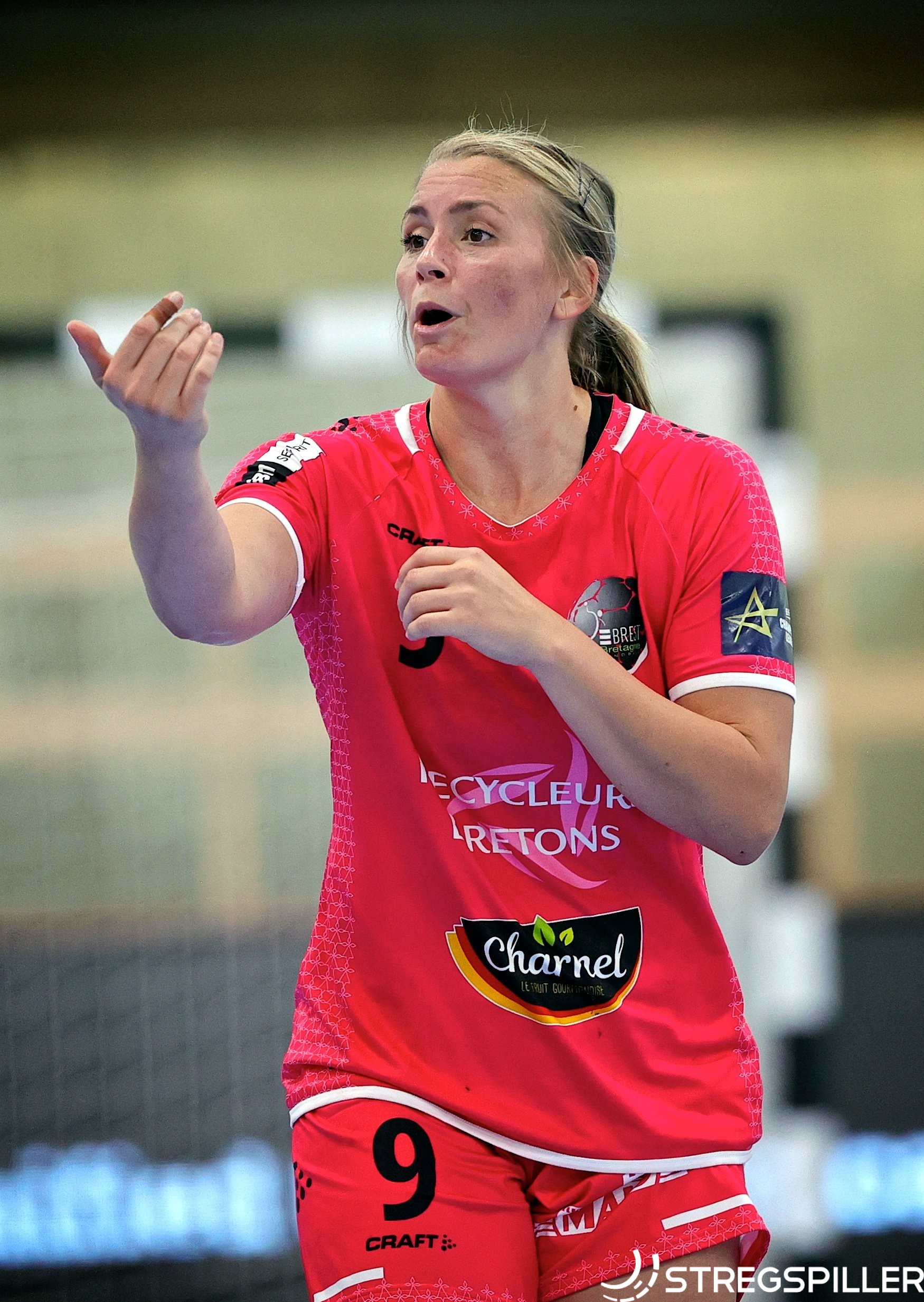 No winner in the much anticipated Champions League match between Brest Bretagne Handball and Györi Audi ETO KC, as the teams settled for a draw – 25:25 (12:12).

For quite some time it looked like Brest would be able to pull off a victory in front of an impressive home crowd before Györi caught up late in the game.

In the end it felt “like today we should have won” according to Player of the Match, Ana Gros (Brest), while Györi’s, Stine Oftedal acknowledged the opposite.  The Norwegian international was “happy” that her team took one point as they could not find their rhythm for most of the match.

Coach Laurent Bezeau – 7
Probably deserved more in terms of ratings and points as he did almost everything right to claim victory today. Although it appeared to work for a short time, his motivation behind taking Sandra Toft out at half-time needs to be questioned and perhaps he could have done more as we all watched Györ slowly but surely claw their way back into the match in the final minutes.

Ana Gros – 9
Clear to see early on that Györ’s defence had targeted Gros and with good reason. She was a bit wasteful with her shots in the first half as Amandine Leynaud had her number but showed she was not fazed with an audacious lobbed penalty late in the first half.

Waited almost 40 minutes for a classic Gros goal and from that point on she was her classic self, ice cold composure on the penalty line, took on the smart passes and shots in crunchtime, doing all she possibly could to finally get a win over Györ.

Isabelle Gulldén – 8
Set the tone for Brest in attack, scoring two early goals. She is not renowned for her goalscoring over the past year but proved she still has the scoring touch.

Played an underrated role in defence and put in a serious shift with all 60 minutes in attack. Potentially felt that in the second half but still stepped up with a great shot to score Brest’s final goal.

Sandra Toft – 8
Brilliant first half performance with seven recorded saves and many of them particularly impressive, including a penalty stop against Kurtovic and a double save late in the half, which is why I’m not sure why she was taken off at half-time.

Thrown back in to try save the day and the two points late in the game but didn’t have much of an opportunity to do so.

Coralie Lassource – 7
Started on the left wing but was unable to get involved in the opening quarter, missing her one shot on goal.

Thrown back in for the second half and produced a much improved performance, scoring an important fast break and one from the wing while a player up which helped build their lead.

Djurdjina Jaukovic – 7
Came on after just 10 minutes and made an instant impact with a goal. She seems to used sparingly at the moment as perhaps she is not as mobile could be but there is no denying her potential as she scored three today.

Kalidiatou Niakate – 6
A real mixed bag for Niakate today. Taken off after only 10 minutes as she struggled to settle but scored a beauty from 10 metres as soon as she returned to court and looked much more confident afterwards.

Too confident perhaps as she took it upon herself to take two unwise shots in the final five minutes, including the very last one, both of which were tame at best and spoiled an otherwise decent performance.

Cleopatre Darleux – 6
Took a while to get going but looked confident after a fast break save against Nze Minko, following it with a penalty save from Kurtovic and going on a run of four saves as Brest turned a one-goal deficit into a two-goal lead.

Unable to keep the streak going after that and was no match for the Györ attack on the hunt in the final quarter.

Pauletta Foppa – 6
Did not do much wrong in the first half on the line, although her usual presence was not felt, she was also thrown in the centre of defence for a while as Brest searched for an ideal combination.

Pauline Coatanea – 6
Was not involved particularly often in the first half and needed to remain patient on the right wing throughout the 60 minutes as all of the action took place down the middle. Scored two from three and contributed well where she could

Constance Mauny – 6
Only on for the second quarter of the game and scored with her single shot, cannot ask for much more.

Tonje Løseth – 5
Played in defence on a few occasions and did fairly well but looked off the pace when coming in at left back in attack, missing a good opportunity straight through on goal.

Sladjana Pop-Lazic – 5
Came on after 18 minutes and was unable to have much of an impact as you would expect or disrupt the Györ defence on the line.

Monika Kobylinska – 4
On after 20 mins and looked out of rhythm throughout her spell on court. Given another chance in the second half but given the hook in attack after just a couple of minutes. Placed in defence after that and performed admirably before being turned inside-out and receiving a two-minute suspension.

Coach Gabor Danyi – 7
Tactically outmanoeuvred today. The defensive system worked well for the first half and again in the final eight minutes, but he still has not found the ideal back court combinations.

Estelle Nze Minko – 8
Helped drag Györ kicking and screaming from the jaws of defeat today. Introduced after 13 minutes and made an instant impact, scoring two goals and adding the half-metre of pace needed to break open the Brest defence.

Produced a couple of great steals and her goal in the 54th minute was a real momentum shifter.

Anne Mette Hansen – 8
There are few players better at getting you a goal when the game is getting away from you. Hansen gave Györ some hope when Brest were pulling away in the final quarter and stepped up with one final block in the final seconds. A proper solid Anne Mette Hansen display.

Viktória Lukács – 8
On at half-time and was incredibly quiet for about 22 minutes, besides getting herself a two-minute suspension, but my word did she come to life when Györ needed her most.

With her side five goals down with eight minutes remaining, Lukács scored four of their final six goals, including the equaliser, playing an instrumental role in a stunning comeback.

Imposed herself early on with some big blocks and played a part in keeping Ana Gros quiet. Played the entire match in defence and was particularly important as they shut the Brest attack down in the final 10 minutes. Also played her part in attack with two goals and good transition play.

Amandine Leynaud – 7
Kept her team in the contest early on with a number of fine saves, producing seven in the first period and setting up some easy counter-attack goals. Was unable to reproduce that form in the second half as Ana Gros found her shooting groove but a 32% save efficiency is a strong return.

Csenge Fodor – 7
Had to be patient on the left wing at first as the backcourt did their thing, but was the to lob a shot in once finally called upon after 15 minutes and scored two more shortly afterwards. Remained on court for the entire afternoon and must have felt a bit lonely in the second half.

Stine Bredal Oftedal – 6
Did not enjoy herself in the first half, appearing to be just a touch off the pace and missing three early shots.

Began second half much better with a goal on the first attack and ran the attack much better from there, scoring an important goal late on to draw Györ back within one goal.

Veronica Kristiansen – 6
Trigger-happy right from the start as she scored two and missed two shots in the opening quarter, before being brought off. That was the story of her day as she went 3 from 6 and was taken off without being able to take control of the game in crucial moments.

Beatrice Edwige – 6
Came in for defence only after 20 minutes and remained there for the most part, doing well to keep Bella Gulldén and the line players quiet and forming an imposing duo with Amorim.

Silje Solberg – 6
Came on for the final 10 minutes as a final throw of the dice for Györ and she played her part in the comeback with a pair of assured saves.

Dorottya Faluvégi – 5
A fairly quiet first half after scoring her one and only goal early on. Brought back in while Lukács served a two-minute suspension and a missed shot likely ensured she would not be staying on once the penalty was served.

Kari Brattset – 5
Practically played the entire match in attack but did not get a single shot on target. It is difficult to blame a line player when they are not getting service and undoubtedly did more than her fair share of the unseen and underappreciated work out there.

Amanda Kurtovic – 4
A day to forget for the right back, who started well with a well-taken goal and confident movement in the back court.

It all went downhill from there as Kurtovic had a penalty saved, followed by two shots in quick succession and another penalty saved in the second half. It might be a while before she steps up to the seven-metre line again.