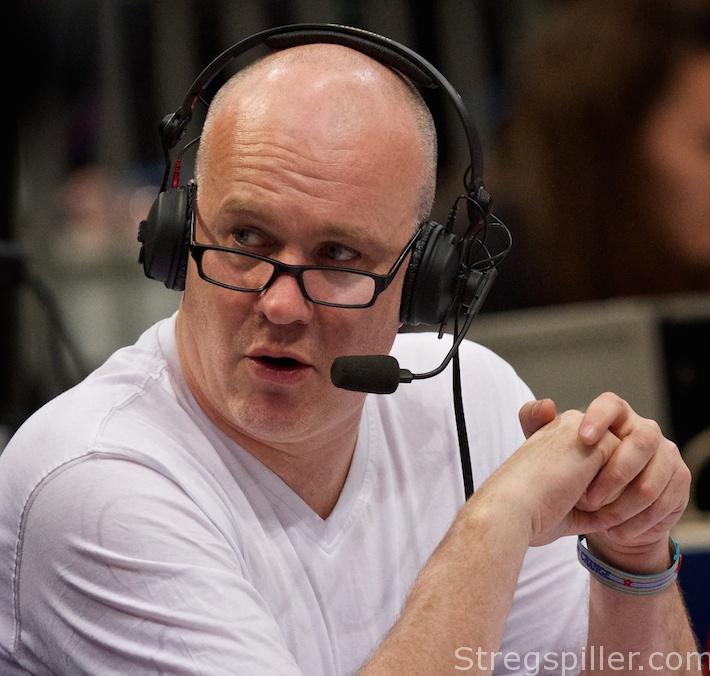 As teams begin preparing for another demanding season in the EHF Champions League we had a chance to catch up with Tom O’Brannagain the outspoken commentator at EHF TV.  He shares his opinion about the new Champions League format, answers the question if Cologne still is the right locale for the men’s Final4 and reveals his fondness for Dutch women’s handball.  It’s authentic Tom – sharp, witty, to the point and never afraid to tackle handball’s most controversial issues.

Q:  How do you spend your time during the off-season?

A:            I really enjoy the time that I can spend with my wife and my daughter.  Do the simple things like catching a movie and work in my garden – believe it or not.  During the EHF Champions League season, I rarely spend weekends at home, so it makes this time of the year so much more special.

Q:  Handball is not on your mind at all?

A:            No – not quite.  I always pay attention to what’s going on during the off-season.  These days it’s easy to follow most of the players, coaches and clubs via social media.  I also train a group of boys between the ages of 9-10 and for the first time I did a handball summer camp with them.

Q:  Looking back at the 2014/15 EHF Champions League season – what was your most memorable moment?

A:            Aside from the EHF Final4 -the last four games of the season are always great – I have to say it was the quarterfinal match between Paris St. Germain and Veszprem in Paris.  The goal scored by Luc Abalo that tied the game seconds before time was my stand out match of last year.

Q:  For the upcoming Champions League season the EHF has changed the tournament format in order to make the group stage more competitive.  Handball’s “heavy-weight” clubs have been placed in Group A and B whereas the teams in Group C and D resemble the “undercard” in support of the main event.  What are your thoughts?

A:            Indeed, Group C and D appear almost like a secondary competition and the clubs may ask themselves:  “Are we in the Champions League?” But I expect some excellent and tight games in Group C and D that the audiences will really enjoy.  On the other hand we have to accept the fact that we are not blessed with sixteen, absolutely astronomical good teams in Europe.  I think that’s the key point.

Q:  Have we seen a tectonic shift in Europe’s handball landscape with the arrival of the Karabatic brothers at Paris St. Germain?  Certainly, there are no more excuses – the club must reach the Champions League Final4 2015/16.

A:            I don’t even think that it is a “Must” that Paris will go to the Final4 in Cologne, it’s a “For Sure”.  A lot has been made of the two brothers joining the club.  I think it’s absolutely fantastic for the team.  But in my view the hiring of coach “Noka” Serdarusic has been the true transfer coup of the season if you can call it that way.  He will make the difference and transform Paris into a team that will play for each other – something the previous coach for some reason could never accomplish.  The way I see it, the biggest challenge will be how to keep every player happy.  Given the concentration of talent at Paris St. Germain there is a risk that we will have a fairly boring Champions League season.  Karabatic & Co. are the red hot favorite for winning the 2015/16 Champions League trophy with Veszprem not too far behind.

Q:  Speaking of winning the Champions League – what do you make of the developments in Kiel considering Filip Jicha’s transfer request to Barcelona?

A:            From Kiel’s perspective it worries me.  If Jicha goes to Barcelona it will give the edge back to them – maybe not vis-a-vis Paris but certainly when compared to Kiel.   Who is Kiel replacing him with?  Christian Dissinger maybe the alternative in a couple of years if he stays healthy, of course.  But if you lose Palmarsson and Jicha in the same season your chances of winning the Champions League are greatly diminished.  Who would I replace him with?  I would love to see Siarhei Rutenka play in Germany, I think it would be brilliant if he would play for Kiel.

Q:  Coming back to Paris St. Germain – from a marketing perspective will the investment in Nikola Karabatic have failed if the club cannot significantly broaden its fan base and/or increase attendance, for example?

A:            Paris is in the same spot like Barcelona.  In both cases, the handball divisions are part of a football club that is of paramount importance.  In these two cities handball will always swim against the tide because football will always be king.  Secondly, there is an awful lot for people to do in Barcelona and Paris.  Is it a failure if Paris cannot fill the arena at Bercy, for example?  I don’t see it that way.  Without disrespecting the small town teams, in Paris you will not get that type of “village mentality” like you will get in Celje, Veszprem or Kiel where handball is the only game in town.  Fact is that in both instances – Barcelona and Paris – the meter stick is not if you fill stadiums, the meter stick is if you win titles.  Show me the trophies.  That’s the only thing that matters.  And the only trophy that really matters is winning the Champions League.  These clubs need to be at the Final4 every year.

Q:  Turning to the women’s EHF Champions League – which transfer ahead of the new season has impressed you the most?

A:            To be honest, I am watching women’s handball from afar at this early stage of the season.  But the transfer that did catch my attention is the one of Nycke Groot joining Gyor Audi ETO.  I think she is a brilliant player and quite possibly the best playmaker in the world at the moment.  The other player that I would like to mention, although she did not change the club is Aniko Kovacsics (Gyor).  Last year she had some stellar performances as a back-court player and it’s a shame that she may have to take a back seat again now that Anita Goerbicz has returned.

Q:  Which club do you see as the favorite raising the Champions League trophy in Budapest in 2016?

A:            Buducnost is the beast that the other teams have to beat even without Clara Woltering who was phenomenal in goal, assuring their Champions League win in 2015.  Buducnost will return to the Final4 in Budapest in addition to Larvik, Vardar and most likely Gyor.

Q:  In general, what do you think about the Final4 format and was it the best decision to keep the men’s tournament in Cologne for another five years?

A:            Absolutely yes – Cologne works really, really well.  The infrastructure is first class and the city is located in the center of Europe.  Fans enjoy a brilliant night-life and last but not least the Lanxess arena is a fantastic 20,000 seat stadium.  I would not change it any time soon unless someone in Paris or London guarantees a full house on both days in a place seating 20,000 spectators.  For me the problem is that with the exception of the Final4 in Cologne the format does not work unless the local team is involved.  In particular on the women’s side it may be better to go back to “home-and-away” games.  In 2015 even the men’s EHF Cup in Berlin only worked because the home team was participating.  I don’t think that you can copy and paste the Cologne Final4.

Q:  What is your opinion on innovative rules such as the Blue Card or the possible introduction of a shot-clock addressing passive play?

A:            There is only one innovation that I saw recently and that’s the Blue Card – I like that because it makes the consequences of an expulsion from the game more transparent right away.  I hate the idea of introducing a shot-clock to the game – period.  I’d much more prefer to call passive play without any warning to the teams.

Q:           Over the course of the next twelve months there are three big handball events on the calendar – the women’s World Cup 2015 in Denmark, the men’s EURO 2016 in Poland and the Olympic games in Rio in August of next year.  Which teams are your favorites?

A:            On the men’s side you can’t really look past France.  It’s almost impossible. I do think they will win another gold medal at the Olympics in Rio.  On the other hand, I am very impressed by the teams of Argentina and Brazil at the moment.  In particular Brazil – they must be a serious contender when they play at home.  They showed a very good performance at the World Cup in Qatar and the squad was very unlucky to not go further in the tournament – very unlucky.  I also count on Qatar playing for a medal whereas Croatia is a spent force.  I can’t see them playing for precious medal.

Poland will certainly be a candidate for winning the EURO 2016.  Not only because they will have home court advantage but also because of the good result at the recent World Cup.  Their main problem will be keeping all the key players fit.  France is the clear favorite and they will have the advantage of having all the main players training together in Paris, of course.  Denmark may have an outside chance and so does Spain with the core of their national team assembled in Barcelona.  Croatia may fight for the bronze medal again but it will be tough.

The Scandinavian teams will be the top medal contenders at the World Cup in Denmark followed by Brazil and Montenegro.  Personally, I like the way the Dutch team plays and I like them to do well.