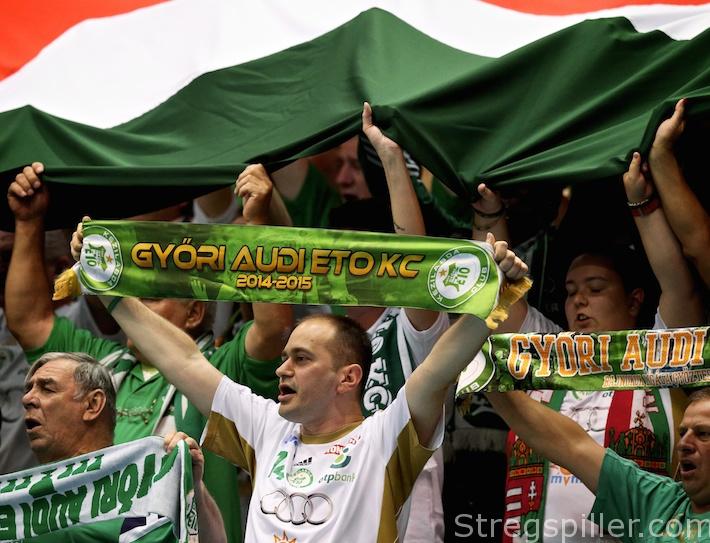 Too Big To Fail

On the outset of the Champions League quarter-final game between the two Hungarian handball powerhouses it looked like an evenly matched fight.  FTC claimed an impressive home record, having surrendered only one point against Rostov-Don.  Furthermore, no other team in Europe’s premier handball league scored more often than the club from Budapest – a total of 282 goals in the main round of the competition.

By contrast, Gyor’s strength resides on the other end of the court.  Defense is the name of coach Martin’s handball game.  His team allowed only 230 goals during the Champions League main round – sporting the second best record behind Buducnost (211 goals).

A complete analysis of how the two squads stacked up before “The Hungarian El Clasico” can be read here.

After the game FTC’s coach Gabor Elek was quoted by saying that he was “ashamed of his team’s performance.”  Gyor had trashed the club from the Hungarian capital 31:18 on their home court – the second outsized win, following a 33:22 victory in Gyor only a week before, in a regular season match.  What had happened?

Gyor got his key offensive actors involved early.  By the ninth minute, Dutch playmaker Nycke Groot and Brazilian international, Eduarda Amorim Taleska had scored twice already, while Heidi Loke had just recorded her first goal of the afternoon.  At this point, FTC was trailing by three and coach Elek saw the need for a first time out.  His crew regrouped and was able to cut the deficit to one goal before going cold. Between the 15th and 25th minute Gyor outscored the Hungarian rival 8:2, laying the foundation of what would turn into a rout for Nerea Pena & Co.  When the two squads changed sides, Gyor was enjoying a comfortable five-goal lead.

Late in the first half, FTC’s right-wing Victoria Lukacs had scored twice and the many supporters of the Hungarian champion were looking forward to a comeback of their team at the beginning of the second period.  Soon there hopes would be shattered.  In the next 15 minutes, FTC would only get the ball past Kari Alvik Grimsbo twice, while shooting from field positions – too little to stem the tide.  Amorim, Loke and Groot were on a roll and shortly after Elek’s third and last timeout, the 2014 Champions League winner was leading by 10 goals for the first time.  For FTC. it only got worse from here on forward.  During timeouts coach Martin reminded his players to play “really, really good defense.”  And that’s exactly what they continued to do.  Only Nerea Pena (2) and Dora Hornyak (1) were able to score in the remaining 15 minutes of the game while Gyor kept extending their lead to 31:18.

Eduarda Amorim Taleska received the official honors of “Best Player” – a deserved award considering her superb performance on both ends of the court.

50% saves – Gyor’s Norwegian World Champion between the goal posts did not allow many balls get by her, on this afternoon in Budapest.  Her teammates defense work together with some of Kari Alvik Grimsbo’s exceptional reflexes worked wonders and did help to pave the road to the EHF FINAL 4 tournament in Budapest.

Anita Gorbicz stepped back on the court following a four-month injury break and in the 54th minute of the game the “Queen of Hungary” successfully scored on a penalty shot.

Not entirely unexpected Ambros Martin did not draw the “short stick” on this memorable afternoon in Budapest.  All his coaching decisions worked and he could afford to rest defense specialist Ida Alstad for the entire 60 minutes of play.

Shortly after the final whistle, FTC’s Klara Szekeres already established her team’s objective for the next game: “We have only one goal for the second leg – to bow out with a great performance in Gyor.”

All that’s left to do on April 9th is another performance that somewhat resembles what Gyor fans have now seen twice over the course of the past nine days.  If that’s the case – and there is little reason why it should not – Gyor will return to Budapest for the final round of play of the 2015/16 Champions League season – the EHF FINAL 4.

Considering all the troubles and injuries that coach Martin had to content with throughout the season, it begs the question: Is Gyor to big to fail?