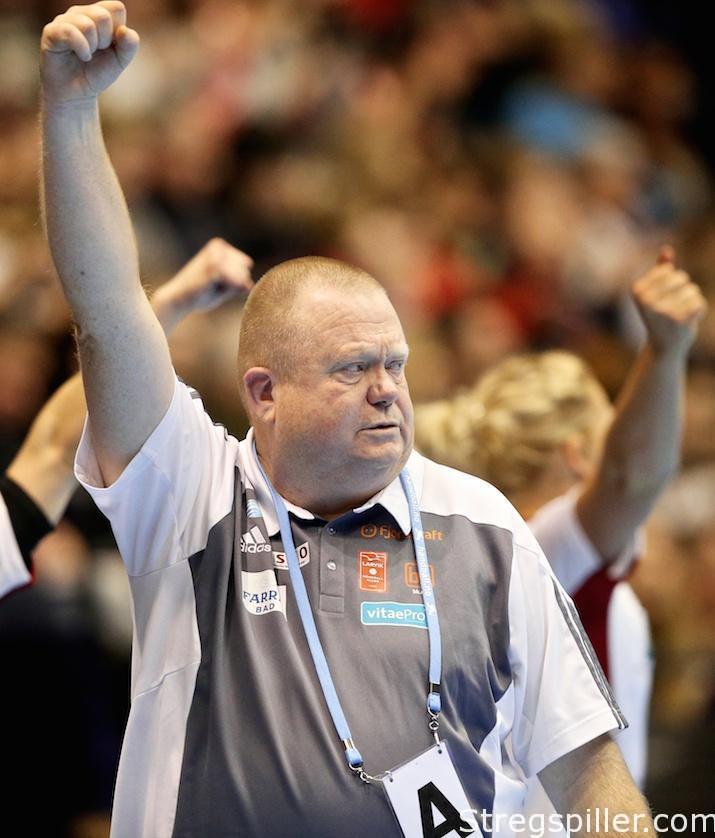 INTERVIEW – After 20 years as “Mr. Larvik”, Tor Odvar Moen is leaving the Norwegian top club to take over Siófok KC in Hungary.

Although it will be his first foreign adventure, he does not see it as a particularly big transition– and before leaving, he would like to win the Norwegian league one last time with Larvik.

It came a bit of a shock to many people in Norway and the international handball world, when news broke that Larvik HK would not extend the contract with Tor Odvar Moen.  After 20 years in the club as head coach as well as several other functions during this time, he personified Larvik HK like no other – he simply was “Mr. Larvik”.  Not anymore, according to the club’s management.

“It was a brutal message,” was the first comment from Tor Odvar Moen back in November, when the news broke.

He had just started to rebuild a new squad at Larvik after an entire team left the Norwegian top club after the 2016/17 season.  Since the announcement, Moen has been looking for new challenges in the world of handball. Just a couple of weeks ago, he told me that he settled his future but that he could not reveal the club yet.  It did not remain a secret for long, however.

Only some days ago, it became official that the 53-year-old coach has signed a three-year-contract with current number five in Hungary’s women league, Siófok KC.  At first, one might think that the move was a bit unambitious for a coach of Moen’s caliber, as some people already saw him as the successor of Ambros Martín in Györ.

However, when you carefully listen to Moen´s arguments for joining Siófok, it becomes apparent, why he decided to move to the small Hungarian town with a population of 24,000 – half the size of Larvik. He likes to build strong teams, and he will get the chance in Siófok.

“The way they want to do things in the club appealed to me, and I realized very soon that it was something I really wanted to be a part of,” explains Tor Odvar Moen.

“It is not all that much more I can say about the future in Siófok at the moment, though.

“Right now, it is important for me to finish the current season and do a good job in Larvik.  A more detailed talk about the team in Siófok for next season will have to come later,” says Tor Ovar Moen, who does admit that the recent signings of Croatian left back, Andrea Penezic and Russian playmaker Tatiana Khmyrova (both joining from Vardar), played a role in his decision making process.

Andrea Penezic told stregspiller.com in a recent interview, that she had changed her mind about ending her career after this season.  Instead, after considering various offers, she ended up choosing Siófok.

“Of course, the fact that Siófok appears to assemble a very strong team for next season appealed to me as well.

“They still have a chance to qualify for Europe in the 2018/19 season – the club’s ambition is to leave their mark in Europe and also play a part in the Champions League.   All of this played a role in my decision” says Tor Odvar Moen who will replace another Scandinavian in the coaching seat.  Siófok decided to end their cooperation with Denmark’s Lars Rasmussen, the younger brother of Hungary’s national coach Kim Rasmussen, a year prior to the expiration of his contract.

The job in Hungary will be Moen´s first assignment outside Norway, but he does not see the step as that big of a change.

“It is still in Europe and Europe is a big area.

“I am simply looking forward to working in the strongest and most exciting league in Europe at the moment,” he says.

Want to leave Larvik in style

Siófok should be in no doubt that they have signed a coach who is accustomed to building strong teams in a short period of time, something the Hungarian club seems to want.

Following the exodus in the summer of 2017, Moen managed to get his new Larvik crew to click quickly and they currently rank as number one in Norway’s “Grundigligaen”, one point ahead of Vipers Kristiansand, but with one additional match played.  This was not the expectation, when Larvik opened the season losing 25:28 at home against Fredrikstad.

Despite the recent success, there is no sadness or melancholy he leaving the club that has meant so much to him for so long.

“I am looking forward to an exciting new challenge, but before I want to end my time in Larvik in style.

“Of course, my goal is to win the league once again before my departure, and we still have the chance to win “Seriegullet” (the league gold, ed.).

“Of our last three games, we have a tough road match against Vipers on April 11, and one week later, we have what may turn into a final against Storhamar (number three at the moment) at home. These will be decisive matches,” he concludes.

Even though he will be leaving Larvik after the current season – not by his own choice – his heart will keep beating for the club that became such big a part of his life.

“Of course, it will, and I will think back and remember many great moments here.

“The greatest accomplishment obviously was lifting the Champions League trophy in 2011.  That’s the biggest you can achieve in club handball,” says Tor Odvar Moen who is a bit anxious about Larvik’s future, as the club has been struggling with financial problems for several years.

“I hope the club can find a balance between a healthy economy and a team that can still play a part in Norwegian handball.

“The Norwegian federation demands that all clubs must have positive or at least neutral net capital, so I expect a tough year for Larvik,” he says.

It is a well-known fact that women´s handball in Hungary is dominated by Györ and FTC – formerly known as Ferencvaros.  It has been this way for several years, but maybe it is about to change?

Certainly, Siófok has hired a coach who can make it happen and who loves a challenge.