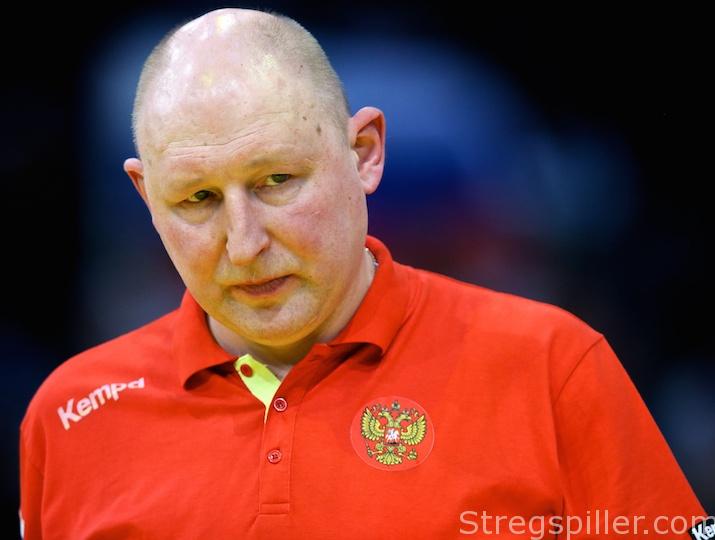 Russia lost to Slovenia yesterday in a game that started well for the former superpower of handball.  But then the speed and skill of the opponent was just too much to handle and in the end, Vid Kavticnik and Co moved on with a 32-26 victory that looked rather easy after all.  Slovenia will now face either European champion, Germany, or the runner-up of the 2015 World championship, Qatar, in the quarterfinal.  After the match I spoke to the coach of Russia, Dimitri Torgovanov, who was critical of the Bonaventura sisters – Charlotte and Julie – the referees of the match.

Thanks for taking your time even after a tough loss like this one against Slovenia. What made the difference today?

DT: Let’s take a look at the statistics first.  The stats show our players were sent-off seven times, Slovenia just twice.  We had one penalty shot –one!  And eight times the ball was called away from us while in offense.  I’ve played in a lot of World championships – I know my stuff.  And I don’t like what I saw.  In the second half we played a bit worse in defense.  But it’s very hard to motivate your players and they tried to do everything but then we had too many turnovers in offense.

Are you satisfied with the performance of your team here at the World championship in France nonetheless?

DT: No, because we have to finish on a higher note and go further in the tournament.  But that’s life.  We have to move on.

But is the overall quality of your team good enough to reach a quarterfinal or semifinal from your point of view?

DT: I think so, yes.  But you shouldn’t forget that Sergej Gorbok and Pavel Atman suffered injuries in the group stage and couldn’t play today.

You took over the Russian national team about two years ago. Are you happy with the general development?

DT: Hmmm, difficult to answer, but the problem is that we don’t have a lot of time practicimg together.  The breaks for the national teams are too short.  And our team is quite small.  Overall I’m satisfied.  But I’m honest, if we had more time working together, we’d be much better.

Are there still enough young talents in Russian handball?

DT: Honestly, that’s the problem.  The new generation of year 2000 is coming up and getting better.  But the selection of players born between 1990 and 2000 it’s a little bit difficult.  We have almost no talents forth coming from that time span, or let’s say, just not enough players to work with.

So you’re quite optimistic, that you’ll have a much better squad in three, four, five years from now?