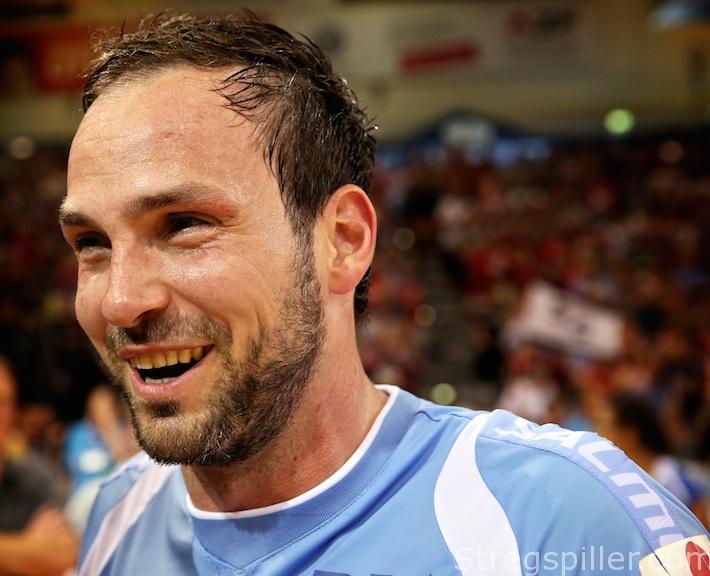 The Triple Cup Club: A tribute to Viktor Szilagyi

Last year, Ivano Balic said “goodbye” to the world of handball, although the Croatian legend remained close to the court as he started to work for the federation of his home country.  The year before Florian Kehrmann called it a career, arguably one of the best right-wings in recent times.  He’s now coaching his former club TBV Lemgo in the DKB Handball-Bundesliga.  Both couldn’t stay away from the sport they love and the same goes for a player who announced his retirement some weeks ago.

Viktor Szilagyi, born in Hungary, moved to Austria when he was six years old because of his father István, who worked as a coach.  His son started playing handball in Budapest, but his star truly began rising once he joined Union St. Pölten, a rather small club, even by Austrian standards.  By the time, he was 20 years old he joined ATSV Innsbruck, but Tyrol was just another stop for him as well.

Already a member of the Austrian national team, he had caught the eyes of several German clubs and Bayer Dormagen was able to acquire his services.  But the club’s financial problems caused his move to Essen after just one season, where he joined TUSEM, one of the biggest teams in Germany.  With the likes of veteran player Dimitri Torgovanov as teammate he started to learn how to be a serious professional and quickly became one of the squad’s key-players.

“Especially the last months in Essen were quite special.  Suddenly the club had financial problems as well and we didn’t know what would be next for us.  We had one final goal, winning the EHF-Cup, and we became a strong unit”, Szilagyi said in a recent interview, talking about his long and illustrious career.  It was the first of many titles for the playmaker, who wasn’t exactly strong, who wasn’t exactly fast and who wasn’t exactly helpful when playing defense.

Funny enough it didn’t matter since he was able to do other things better than almost everyone else.  There are only a few players who understand the game like Viktor Szilagyi.  He can read and understand what’s going on even before things are happening. That’s probably the main reason why he was still able to play at a high level, the last two- or three years, when injuries began taking a toll on his performance.  Still, his opponents continued to struggle, while defending against his “slap-shot” and especially his “fake-shots”.

I would go as far as making the following statement: If Viktor Szilagyi was German, Croatian, French or Swedish, we would probably talk about one of the best players of all times.  There are lots of reasons that make Szilagyi really special, also by historical standards.  For example, he’s the only player ever, winning all three major European club titles.

After Essen filed for bankruptcy, he moved on to Kiel and during his three-year spell at THW, he added various national titles to his collections – most importantly a victory in the 2007 Champion League.  With Gummersbach, his next club, he added another EHF-Cup in 2009 and completed the triple a year later, when the VfL won the Cup Winners Cup.  Another Cup-Winners-Cup followed with Flensburg in 2012.

And while more and more players join the so-called “Triple Gold Club” in ice hockey every now and then, Viktor Szilagyi will forever remain the only member of the “Triple Cup Club” thanks to the reform of the European handball competitions.

But what will Viktor Szilagyi’s legacy look like?  He has been more than just a “great” player; he has also been a great professional and a fantastic individual.

His value for Austrian handball is difficult to put into words.  He has taught younger players how to play, how to work and how to focus on the core elements of the game, while being successful on the court and humble and polite off the court.

Unfortunately, he couldn’t lead the “Red and White” crew to international glory since he had to carry “the entire load” for most of the time himself.  Support coming from the likes of Robert Weber, Raul Santos and super talent Nikola Bilyk came too late, to make a difference.

But he got the chance to take part in the 2010 EURO in Austria, the 2014 EURO in Denmark and the 2015 World Championship in Qatar, losing to the host nation in dramatic style.  At the time, he wasn’t too happy about the performance of the referees, to say the least.  But he wouldn’t make a fuss about it.  He showed his class, even in the moment of defeat.

When Szilagyi will step on the court for a final time, next Wednesday in Vienna, when Austria faces Denmark in the return leg of the 2017 World Championship playoffs, he will most likely end up losing the game.  But he will leave behind a legacy of being a winner, a true champion and one of the best players of all times.