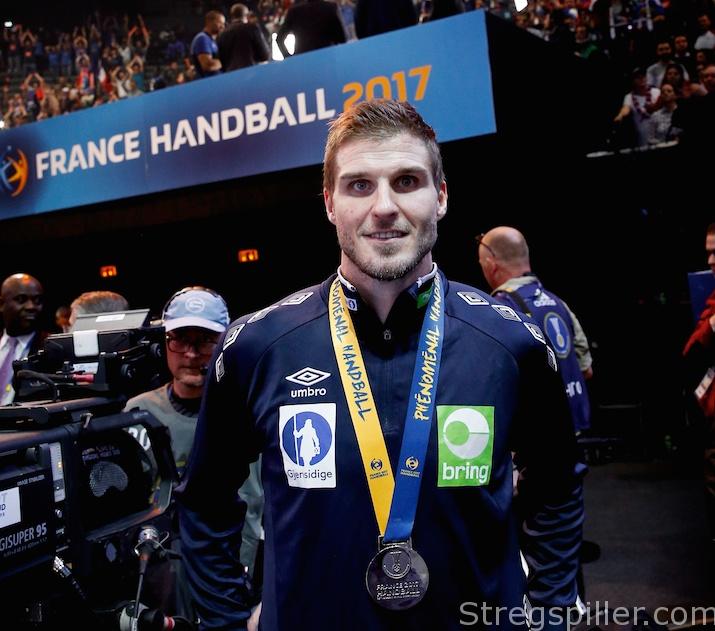 First of all, to avoid any sorts of misunderstanding, I really admire Domagoj Duvnjak for all he does on the court week in and week out.  He’s not only the leader at his club, THW Kiel, but also the dominant player in the Croatian national team, especially after the retirement of Ivano Balic.  He’s also a great guy to talk to, always honest and straight to the point.  That’s how journalists love it.  But I cannot agree at all that he made his way into the official All-Star team of the 2017 World Cup.

I guess he’s asking himself the same question.  Rested for the most part in the last match of the group stage against Germany because of nagging knee problems, he also didn’t have too much of an impact later on.  In the knock-out stage, he shot a combined twelve goals on 34 attempts, a rate of just 35 percent.  It’s only one more element of proof that naming the All-Star team has increasingly turned into somehting resembling a life-time achievement award rather than premiering actual performances at a particular tournament.

That’s why I decided to make up my own All-Star team and crown my own MVP.  Nikola Karabatic was awarded MVP, but I have my doubts that he had the most impact on the French team.  Just look at the stats of Vincent Gerard towards the end of the competition.  He was superb and more valuable to the French squad than Karabatic.  But that’s just my personal point of view and that’s why making up teams like this can be a lot of fun.

My goalkeeper, as you might guess, is Vincent Gerard.  He saved more than 40 percent of all shots he faced during three of the four games of the knock-out stage.  Coming off the bench against Sweden in the quarter-final and Norway in the final, he arguably changed the outcome of these matches in favor of France.  There’s no doubt, he played the tournament of his life – so far.  As I said, I’m going with the performances I saw during France 2017.

That’s why Jerry Tollbring from Sweden and Gasper Marguc from Slovenia are my wing players.  With wingers it’s almost as „easy” as it is with goalkeepers, because stats don’t lie.  Tollbring, who will join Rhein-Neckar Löwen, scored on 83 percent of his shots – quite impressive.  While Norwegian Kristian Bjørnson made the official All-star team, I had to go with Marguc, because he split playing time with Blaz Janc.  Add only half of Janc’s 30 goals to Marguc’s total and he would have won the goal scoring crown.

Let’s move on to the back-court.  Sander Sagosen, the future face of handball, next to a few others, made the official team as well as mine.  He’s just 21 years old but was able to show that his strong performance in last year’s EHF Euro was no fluke at all.  Paris Saint-Germain will be very happy to have him on the roster in the near future.  The same goes for Nedim Remili (France), who will join Sagosen in the French capital.  He may very well turn out to be the player, Xavier Barachet didn’t become.

All we have left is the playmaker position, and since I started the article with my concerns about Duvnjak’s nomination, you might be wondering who my choice is?  Actually, his teammate, Luka Cindrić.  He may not be the tallest player around, he’s also not the fastest.  And he won’t score ten goals per game, but he’s what a playmaker should do – making plays.  Especially with Duvnjak having an off-tournament by his standards, Cindrić was able to take charge, adding structure and rhythm to the Croatian game.

While I couldn’t agree more with the official announcement of Bjarte Myrhol on the pivot position, I still have to name my MVP. Karabatic was the obvious and maybe the expected choice, but in my eyes, it wasn’t the right decision.  I already claimed that Vincent Gerard was more valuable to France than Karabatic was.  But I also don’t like to give the honors to a goalkeeper, as they stand out because of the nature of their position, anyway.

You might disagree with me, but Bjarte Myrhol is my MVP.  He played on both sides of the court and nobody works harder during games than a line-player and central defender.  I also want to reward the mental aspect of the game.  He was the true leader in a young Norwegian team and showed that he’s still capable of performing at the highest level while playing for a club that doesn’t even participate in the Champions League.  For me, nobody was more valuable for his team during World Cup 2017 than Norwegian veteran Bjarte Myrhol.  Well done, Bjarte!