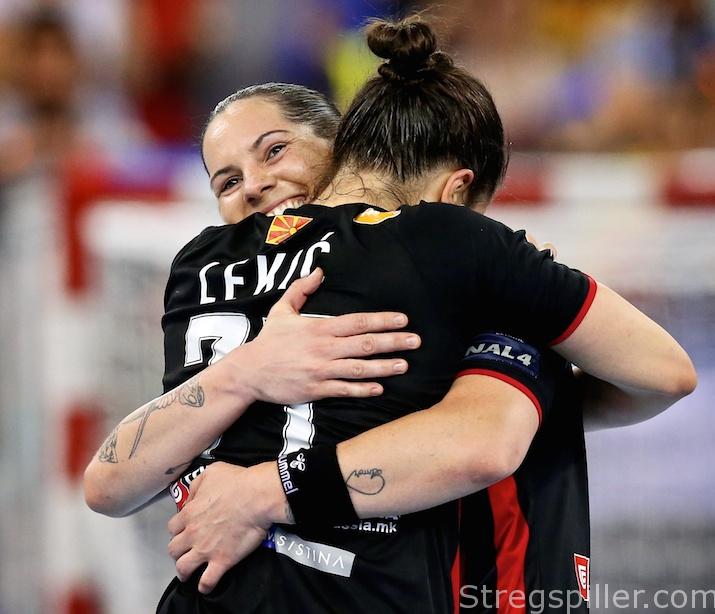 Most pieces of the main round puzzle fell into place, and only two tickets are at stake this coming weekend.

This does not mean that the rest of the matches are without importance – to the contrary.

After five matches we are beginning to see the picture of the two main round groups shaping up.

Only two spots for the remaining 12 teams are still up for grabs.  However, other matches are important as well, in order to accumulate maximum points for the main round.

Match of the Week – Round 5

In this game much was at stake for both parties. To Brest, it was a very last chance to keep their main round dreams alive, while Rostov-Don could clinch main berth with a draw.

As it turned out, Rostov-Don reached the main round in convincing fashion, in a match that had its up’s and down’s.

Rostov-Don started well, getting ahead 5:1 and 7:2.  The Russian’s did not want to leave any doubt, which team would take the last ticket in the group, where Györ and FC Midtjylland had qualified already.

However, Brest launched an impressive comeback, and by half time they were just one goal down.  All of a sudden the main round came back into sight when the French runners-up took the lead at 17:16, early in the second half.

The French host was ahead for a second time in the match but unfortunately it was also going to be their last lead.

Scoring five consecutive goals, while changing an 18:18 stand-off into a 23:18 lead, Rostov decided the encounter.

During the week, Midtjylland announced new ownership.  The English owner of the Danish football club no longer wanted to cover the deficits of the handball team, which was taken over by a group of local investors.

But, the turmoil did not influence the players, as they put up a brave fight against the Hungarian favorites, who ended the battle adding yet another name to their injury list.

German line player, Anja Althaus, had to be assisted off the court at the end of the first half with what looked like another serious knee injury.

With five players sidelined, Ambros Martín had his work cut out, as his team was in trouble several times during the 60 minutes in Ikast.  But in the end, 13 goals from Nora Mørk made the difference.

Györ made sure of winning the group taking six points to the main round, while Midtjylland will carry at least two points unless they’ll succeed in Rostov.

At last, Larvik showed us what they are made of.

The week leading up to the important clash in Germany did not exactly boost morale of the Norwegian champions.

A shocking 36:37 defeat at home to Stabæk, in the semi-final of the Norwegian Cup, meant that the 2017 Cup final would take place without Larvik for the first time in 16 years.

However, the loss did not seem to affect Larvik in Nordhausen, on Sunday afternoon.  And it’s still not certain that the main round will be played without the team from Norway either.

Larvik were leading all the way, several times by five goals, winning by three in the end.  Still, Thüringer has the edge when looking at the internal results between the two clubs.

Champions League round number six this coming weekend will decide which one of the two teams will secure the last main round ticket.

We simply cannot avoid the nomination of the effective Norwegian right back.

13 goals speak for itself and Mørk´s impact in the game in Ikast, where Györ took a hard-fought 27:24 victory against FC Midtjylland.

She dominated the match from the very beginning, scoring the first three goals making it 3:0, while continuing her one-woman show for the rest of the match.

When Andrea Lekic is not present, Vardar’s “other Andrea” has to take on extra responsibility, and this was exactly what Andrea Penezic did, when Vardar booked a 29:28 road win against FTC.

With Andrea Lekic sidelined due to a shoulder injury, Tatiana Khmyrova and Alexandra Lacrabere took turns as playmakers, while Penezic kept scoring goals.

When all was said and done, she had scored an impressive nine goals while playing 58 minutes – with her only break a two minutes suspension.

“I am really annoyed.  We had all chances to take a point or two here, and it hurts me as well as the girls that we did not,” said FC Midtjylland coach, Kristian Kristensen, after his team´s 27:24 defeat at home against Györ in Group B.

Main Round Participants after Round 5

10 out teams are ready for the main round before the last match day.

From Group A: CSM Bucuresti, Krim and Nykøbing

From Group B: Györ, FC Midtjylland and Rostov-Don

From Group C: Vardar and FTC

From Group D: Metz and Bietigheim

“D-Day” coming up – in Group D’s match between Buducnost and Vipers (Saturday), a draw will do for Buducnost, while Vipers needs a win and the same holds true for the two games in Group C, where Larvik will have to collect at least one point more than Thüringer HC.

Thüringer are visiting Vardar already on Friday, while Larvik receive FTC, on Sunday.