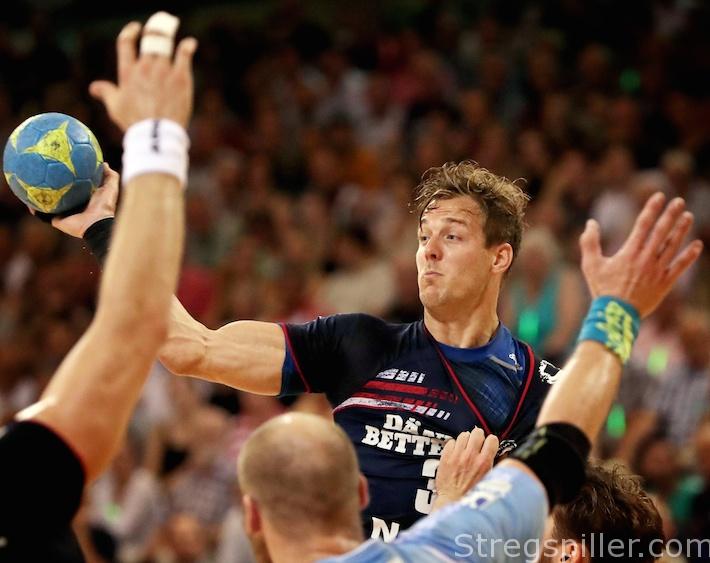 Do you remember the 2014 Final 4 in Cologne?  I guess you do.  Kiel or Barcelona, Barcelona or Kiel, maybe Veszprem?  And SG Flensburg-Handewitt?  Bound for fourth place.  In the end the boys of Ljubomir Vranjes stunned the handball world – first shocking Barcelona and then archrival THW Kiel.  It was a weekend for the ages.

But Flensburg is far from being the underdog these days.  Vranjes has done an excellent job of developing young players and resting his old stars when needed.  Danish playmaker Thomas Mogensen and German sharpshooter Holger Glandorf also “did him the favor” of retiring from international duties.  They are totally focused on winning with Flensburg.

SG was quite close of going back to Cologne this past season only losing on away goals in the quarterfinal against Kielce.  The team was furious, and rightfully so, about a call that wasn’t given in the dying moments of the return leg.  But Flensburg had wasted enough scoring opportunities in the 60 minutes before and could only blame themselves.

After all Flensburg couldn’t win a single title last season, going from Kielce to Hamburg, losing the German cup final against Magdeburg, while finishing second in the league.  The lesson learnt: Flensburg wouldn’t make the same mistakes twice, for example losing points early in the season which would hurt them later on.  Or taking wins for granted.

Flensburg still owns a perfect record this season, having won a key game in the title race of the Bundesliga at Rhein-Neckar Löwen, while beating both Magdeburg and Melsungen at home.  At this point last year, SG had already lost twice and drawn once. The game at Mannheim against “Löwen” was quite impressive, conceding only 17 goals while keeper Mattias Andersson “shut the door” for most of the time.

This season Flensburg can only beat themselves – all experts in agreement.  While Rhein Neckar Löwen are very dependent on Andy Schmid, Kiel is still a work in progress – although newcomers Nikola Bilyk and Lukas Nilsson have done quite well during their first months in the North.  Flensburg’s biggest advantage is team chemistry, the players know each other very well.

The club signed only one additional player – Ivan Horvat, a 23-year old Croatian playmaker, who convinced coach Vranjes during his handball camp over the summer.  And only one player left – pivot Krezimir Kozina.  He was hired as a replacement for injured Anders Zachariassen; Kozina joined Füchse Berlin on a one-year deal.  But there are already rumors that he will come back to Flensburg in 2017.

So it’s all about familiar faces in Flensburg, like goalkeeper Andersson.  I still think that he is  a great player, but he had a subpar Olympic tournament.  More recently he fought back nicely with a great performance in Mannheim.  He needs to be in top form in order for Flensburg to go far in the Champions League.  While Kevin Møller is a great backup, I doubt he’s the answer in goal over the long haul.

In back-court a lot depends on how fast Rasmus Lauge will recover from the knee-injury he suffered late last season.  Right now, Ljubomir Vranjes has a lot of options to replace him.  For example, Jim Gottfridsson or Petar Djordjic, who has shown signs of his great talent that we saw during his first stint in Flensburg.

On the wings Danish duo Anders Eggert, (it’s his last season with the club) and Lasse Svan, bring a lot of speed, experience and skill.  Hampus Wanne and Bogdan Radivojevic can always come in and you will hardly notice any difference.  And Frenchman Kentin Mahe is always an option on left-wing as well, but he is more valuable in the back-court to relieve Thomas Mogensen from time to time.

So far I didn’t even mention Holger Glandorf and Johan Jakobsson, the two right-backs.  I also didn’t talk about the squad’s great defense around captain Tobias Karlsson and Henrik Toft Hansen.  It all looks quite decent to me.  To be honest, SG is the most exciting team to watch – to me anyway.   But fun doesn’t always translate into success, as we all know.

Still, I expect SG Flensburg will make it to the quarterfinal.  And then Cologne is just around the corner.  My gut feeling tells me something big is going to happen in Flensburg this year, and the Final 4 will be part of it.  To nobody’s surprise.