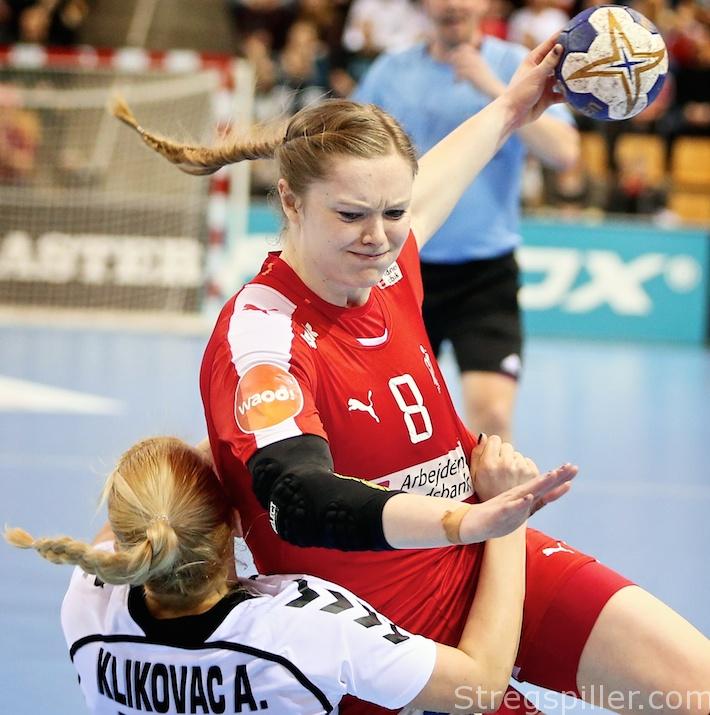 Denmark have a very modest goal of finishing among the top 12 teams at EURO’16, but maybe they can benefit from weaknesses of some of the other teams in an otherwise tough bracket.  The actual strength of the Danish squad is difficult to judge.

The transition from coaching men to training women has been a bit more difficult, than Denmark´s head coach Klavs Bruun Jørgensen expected.  He may or may not share this experience with Germany´ s Michael Biegler, but Bruun Jørgensen seems to have come to terms with the difference in mentality between the two genders – finally.

His first 18 months as Denmark´s national coach was no walk in the park for the former right-back of the Danish national team.  So far, the results have been disappointing.

A sixth place at the World Championship on home soil a year ago and a missed Olympic qualification – while enjoying home court advantage – are not exactly impressive results for Denmark’s women.  Apart from numerous calls requesting an early dismissal, Bruun Jørgensen has also been facing severe criticism from his players for being too much of a “dictator” among other complaints.

At the moment such remarks have been silenced, and some sort of harmony has apparently been established between the squad and coach.  But Jørgensen´s decisions and actions are still being debated in the media.

Lately, his nominations ahead of the European championship have caused a stir.  And it is a bit of a concern that he only picked three left-handed players of the 16 names who will make the trip to Sweden.

Apparently, he finds that FC Midtjylland’s right-back, Louise Burgaard, is not good enough right now to join the team – despite several stellar performances of Burgaard in the Champions- as well as in Denmark’s domestic league.

While Jørgensen has enlisted no less than six right-handed backcourt players and three line players, his squad consists of only two right-backs and one right wing.  A better balance might have been in order.

During the fall, the Danes have been inconsistent in their test matches, to say the least, and their true performance level is hard to judge.

Their official objective at EURO’16 is rather modest – a rank among the 12 best teams will suffice.  Meaning, just one victory will be enough to reach this goal – not unrealistic when you look at Denmark’s bracket.

However, when you look at the current situation of opponents like Montenegro and Hungary – not to mention the Czech Republic – Denmark, might aim a little higher.

Under “normal” conditions, Denmark would probably not have much of a chance against Montenegro and hardly have a shot against Hungary.

However, circumstances are not as usual, as both teams are weakened by either changes in their squads or injuries.  Therefore the Danes do have a good opportunity against both competitors, while beating the Czech Republic should not be a problem at all.

In the main round, things will look different for Denmark.  Still – if Jorgensen & Co. take two to four points with them to the next round – which is not unrealistic at all – they might still be able to create more upsets further down the road.

And we have to take comfort by the fact that Denmark has beaten one of their main round opponents, Russia, decisively in their two most recent games.

The 27-year-old Larvik keeper has become even more important to Denmark after Viborg´s Rikke Poulsen has been ruled out with a groin injury.

Just like her club team, Toft had a slow start to the season, but as the weather became cooler, Sandra Toft turned up the heat, and if she can perform in Sweden like she has done for Larvik lately, she will help Denmark to go far in the tournament.

Actually, it is hard to say if Jørgensen is better in the center of the court or on the left-back position.  She may be a bit better shooting from left-back, but the 26-year-old FC Midtjylland player is also an asset as playmaker.

Her fine performance at the club level has caught the eye of former national coach Jan Pytlick who can look forward to coaching her in Odense as of next season.  But before that, Danish fans have every right of having high expectations in Jørgensen at the European championship.

As Klavs Bruun has not been willing to take a chance nominating Louise Burgaard so soon after her long injury break, Mette Tranborg, a 20-year-old championship debutant will have to carry a heavy responsibility.

Standing 192 cm tall, she enjoys no small advantage because of her height.  But her confidence level may be harmed by playing in a team at the bottom of the Danish league, SK Aarhus, losing more games than winning.

Just like Stine Jørgensen, Tranborg will be joining Odense next season, but this circumstance may not benefit the Danish team right now.