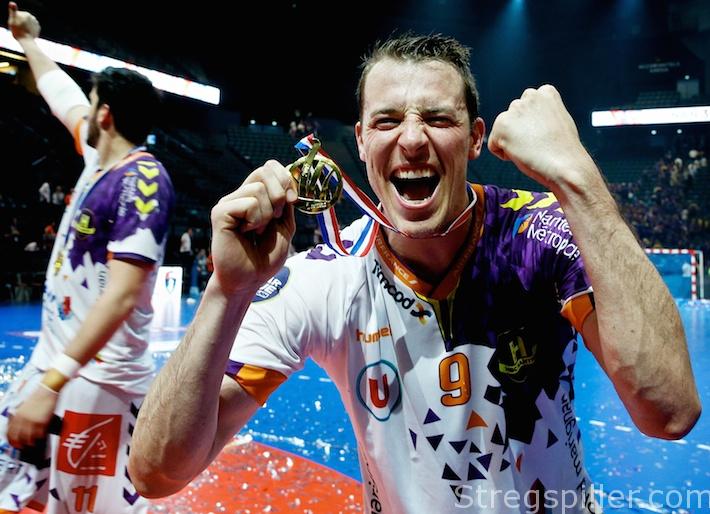 Dominik Klein surely is one of Germany’s most popular players. The former left-wing of THW Kiel just recently announced his retirement, while enjoying the last months of a very successful career in Nantes. In fact, the French club has a good shot at reaching the Final4 of the 2017/18 Champions League –  one of the  topics I had the chance to talk about.

Your Champions League performance in Brest was quite impressive – it’s fun to watch your team play. But the second leg game almost slipped out of your hands. Why?

DK: First of all – thank you for the compliment. It’s always nice to hear when people enjoy our game. We rely on good defense and fast-breaks and then it’s a lot of fun to play fast. That’s our game. Regarding the return leg – well, that’s Champions League. You have to be mentally strong and focused once you win by eight away from home. I wouldn’t agree that we had to be afraid of being eliminated during the match, but for sure it was a hard fight. They tried to surprise us by changing their goalies or when Petar Djordjic replaced Pavel Horak in offense, but we expected that.

Everyone expected you to face Veszprem in the next round, but now it will be Skjern.  Some of the players, like Bjarte Myrhol or Anders Eggert, you know quite well. Why are the Danes such a dangerous opponent?

DK: It (Skjern ed.) might be a surprise to many, but I think that Scandinavian handball is very fast and well set up tactically.  As you said, Bjarte Myrhol is part of the team and he is a  line-player who is working very hard – we have to keep him in check. We haven’t seen a lot of Skjern so far, but generally speaking, I consider Scandinavian handball as very attractive. However, as our games against Brest showed, it seems to suit us better to play against bigger and physically strong teams. We play a very aggressive defense and we have to see how it will work out.  Against Kristianstad in the group stage we did a good job and now we have to prepare for the games against Skjern.

It appears that the favorite teams are having a tougher time compared to the past – it’s getting closer at the top.  What do you think – is it good or bad development?  Some say it’s important to establish “faces”, and this might be easier if the same clubs keep winning?

DK: I always prefer when a lot of teams are on the same level. It means that the standard below improved and as a result the top level benefited as well.  I also think that upsets by the underdogs make handball more attractive and exciting. It’s great for our sport. Actually, I don’t know how establishing “faces” doesn’t fit in here?

Let’s take a look at the French league and the development in the last couple of years. Is France on its way having the best league in the world?

DK: Actually, that’s true, because a lot of famous players came to France.  For example Chema Rodriguez, who is playing for a smaller club – in Saran. Players like him make the league more attractive and the level of play improves. You also have to consider the youth system, which is excellent. The country and the league are investing a lot of money into the sport and the development of young players. It pays off in the league and it shows as a lot of young French players are quite good.  You have to take a look at it. But I don’t think it (the French League ed.) will become the “best league” in the world, because Germany’s HBL  is just better when it comes to the overall quality.

I assume you are following Bundesliga handball closely. Two weeks ago your former club, Kiel, showed what’s possible when beating Rhein Neckar Löwen easily. How come they lose at home to teams like Wetzlar or away against some of the weaker clubs like Gummersbach?

DK: Yes, I follow the league and I was happy that Kiel was able to win against Rhein-Neckar Löwen, apart from all the scheduling chaos.  But I think it influenced the players a little bit.  It was too much of a topic, nobody talked about the match itself.  Still, it was an impressive performance by Kiel. When it comes to the losses that you mentioned, it has been a roller-coaster experience, so far this season.  But I believe the club is on the right track with the people they signed recently, like Filip Jicha and Viktor Szilagyi.

That’s true – THW is part of my next question.  I would like to know what’s on your mind with regards to your future?  Are your plans totally independent from what’s happening in Kiel? During the European championship you did a great job as TV expert. Is this your long-term plan or do you see yourself as a coach or manager? It’s hard to imagine you won’t stay close to handball…

DK: For sure, I would like to be available for handball, if you want to call it this way.  I agree – I had a lot of fun working for ARD (German free-TV ed.) during the 2018 European championship. I enjoyed it a lot – it was great.  It showed me that you need to perform in certain ways and that’s only possible when you prepare yourself.  You have to be professional and then it’s a lot of fun doing this job.  I hope that I can be part of the World championship next year and apart from that I would like to work towards the coaching license.

I’ve always said that I was kind of educated during the past 15 years in pro-handball.  Not only can kids benefit, but maybe companies can learn from a pro-athlete as well.  Especially, when it comes to motivating yourself for daily work, team building or project management.  I was able to get a glance of some of this in the past and I see myself in different areas.  But right now, I’m not sure what’s next.  The last years have passed by so fast that I would like to have a chance to take a look back at everything.  Professional handball is a fast business, which makes it almost impossible to realize what happened and that’s what I want to do first.

Most likely you will follow the 2019 World championship very closely.  How do you rate the chances of the German team, even if it’s still a long way to go until the first match?

DK: Yes, I would be happy to be very close to it.  During the European championship, I already got a feeling how close you can be to everything, and to the team – emotionally as well.  In case you watched me during the matches then you know that I was very much into it.  Regarding the team – all I can tell you – based on my own experience – is that it can push you a lot if you play a tournament in your home country. Handball really needs this kind of euphoria.  I think the team will do a much better job when it comes to communication –  I’m very optimistic about it. We want to go to Hamburg and experience the venues in Berlin and Cologne along the way.  It all means reaching the semi-finals.