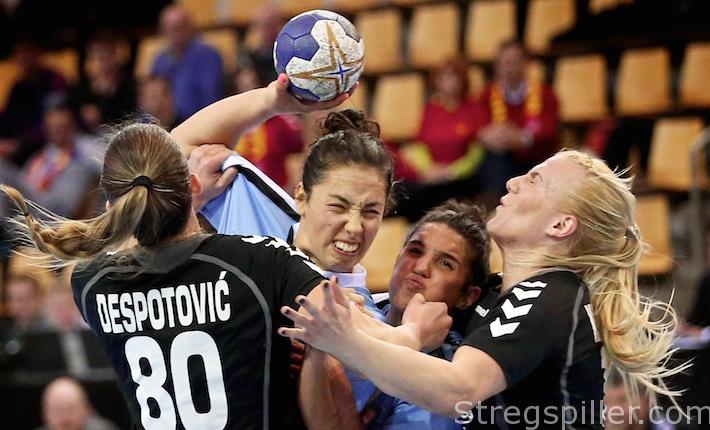 FEATURE – In a time, where several South American nations pop up on the international handball stage – with Brazil and Argentina as the most outstanding examples – Uruguay still play the part of “little sister” who likes to tease.

Let’s face it – Uruguay is not a nation that is well known for handball.  Had it been football, the situation would be somewhat different, but Uruguay and handball is not a combination we are used to and this goes for women´s as well as for men´s handball.

Several South American nations have made their names known in international handball in recent years, with Brazil and Argentina as the finest and most outstanding examples, but we are still waiting to see Uruguay on the same level.  Still, these days the women from Uruguay are in Denmark to play qualification matches for the Rio Olympics in August of this year.

Everyone – including each and every member of the Uruguayan delegation – knows that they will never even get near qualifying, but one has to admire their spirit and enthusiasm.  In the opening game of the Olympic qualification group in Aarhus, Uruguay were actually able to put the favorites from Montenegro under pressure for most of the first half, before the match ended with the expected 34:19 win for the handball powerhouse from southern Europe.  Maybe the good performance the team left in Ceres Arena was the reason why we met a very relaxed national coach Miguel Berger and goalkeeper Paola Santos, after the match.

Could not stand the distance

“In the first half, we succeeded pretty well with the things we wanted to do, but in the second half, we were not able to keep with them and we were not disciplined enough either,” Miguel Berger explains.

“I do think, we might have gotten too many two minutes suspensions, but still, you should never expect an amateur team like ours to be able to match a professional squad like Montenegro,” he adds.

Neither the coach nor his goalkeeper expects the task to get any easier against Romania on Saturday evening.

“Once again, we will try to do our best and no one can expect anything more from us.  Of course, this will be another game against a top professional team, who are obviously huge favorites against us,” Miguel Berger realizes.

“Still, it is a great honor for us to be here in Europe and play these Olympic qualifiers.  Furthermore, there is no doubt that we pick up a lot from playing them, even though nobody looks at us as a contender that stands a chance to qualify for Rio,” he says.

Although handball, including women´s handball is rather big in great parts of South America, Uruguay still expects to stand in the shadow of bigger nations such as Brazil and Argentina for some time to come.

“Actually, handball is the biggest women´s sport in Uruguay, but then again that does not say much and right now, the prospects for women´s handball in our country are not exactly prosperous,” explains Paola Santos.

“The financial aspects simply set certain limits to the opportunities to develop handball in Uruguay. For instance, our national coach gets no salary for his work.  I think this shows the condition, we are working with quite well,” she adds.

“Still, we are determined to go on improving and developing the sport in our country and in this respect, playing matches like these Olympic qualifiers will help us a lot in our learning process,” finds coach Miguel Berger.

We can only wish them the best of luck with their efforts to develop women´s handball in their country but we also have to realize, that for a while, Uruguay will not be more than that – the naughty “little sister” that intends to challenge handball’s status quo in South America.  However, at this Olympic qualification tournament in Aarhus, the “little sister” is an unlikely candidate to tease any of the big teams.