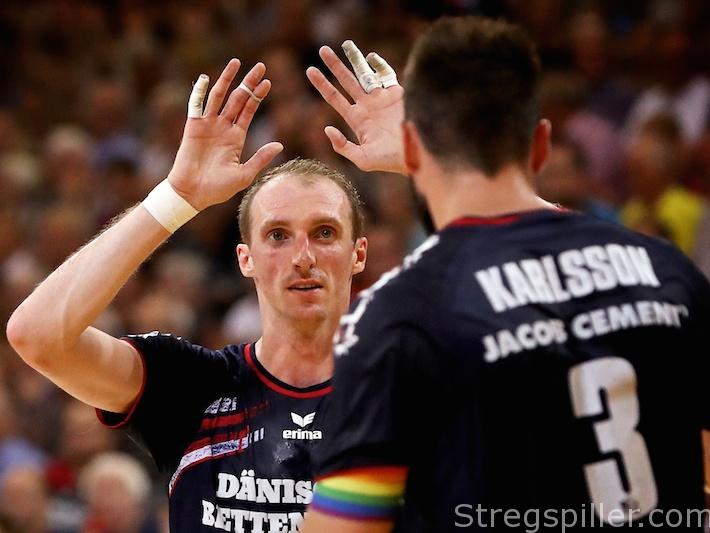 Holger Glandorf is not only one of the most regarded players in all of handball, but also one of the best and most successful ones. Recently he broke the record set by legendary Korean right-back, Kyung-Shin Yoon, for most field goals scored in the history of Germany’s Bundesliga. I talked to the outstanding right-back about his accomplishment, the transition from Ljubomir Vranjes to Maik Machulla and his expectations for the upcoming Champions League clash with Montpellier.

You are second in the league right now, you reached the quarterfinal of the Champions League once again – you must be quite happy about your season so far?  Especially when considering a new coach as well?

HG: We are very happy with regards to the Champions League as we are among the best eight teams again and that’s anything but an easy accomplishment.  As you said we got a new coach and some new players as well – so it wasn’t a given that we would get that far. The race for Europe in the (domestic ed.) league is quite tight.  With the exception of losing at home to Berlin in the German Cup we can be satisfied with the season until now.

Sounds to me like you are not exactly happy when it comes to the Bundesliga?

HG: You have to be satisfied when occupying second place, but we definitely wasted some points. I would be OK with finishing second, though.

I think reaching the quarterfinal of the Champions League is a great accomplishment because it seems to get more difficult every year. What’s your take on it?

HG: Absolutely, I agree. In particular when considering that big teams like Barcelona or Veszprem are out already. But now we want more, it’s only two more games before Cologne and we will do everything possible to reach the Final4.

So what do you think about your next opponent – Montpellier?

HG: I wasn’t able to watch the game against Barcelona yet, but Montpellier has smaller, more mobile players. They are first in the French league ahead of Paris and Nantes, so it shows how good a team they really are. We played against them two years ago and won both matches by just one goal – so we should be warned. I till be a tough task for us.

They play almost the same way as you do…

HG: Yes – they play quite fast and with a solid, compact defense. It’s not easy to compete against them and usually there is a great atmosphere in Montpellier. We have to pay attention.

Let’s talk about yourself a bit. Recently you set a new record for most field goals scored in the history of the Germany’s Bundesliga.  But it almost seems like you don’t care about it, do you?

HG: Sure, I can be proud of it, but we had a tough match to play against Berlin. I was two goals short of the record before and I knew, I would be breaking the record at some point this season. So, I tried to stay focused on the game. It was great that it happened at home but it was even better that we won the match. As I said it makes me proud, but it’s always more important to win and be successful with the team.  It makes me happy when I can help my team by scoring goals.

We mentioned it already that Flensburg has a new coach – Maik Machulla took over from Ljubomir Vranjes last summer. Do you think it helped him, knowing the system you play, especially when considering the changes in the squad?

HG: I think so – yes. He didn’t change too much as we did before.  But he got some help as well – now we are working with an athletic coach as Maik puts a lot of emphasis on his players being in great shape. The intense work in the summer is paying off now, as we have no injured players at the moment. It’s been a long time that we were injury-free at this point in the season. He is a great communicator; he is listening to the team and the results show that we are on the right track. Soon, Maik will have to get more young players involved, but we are all looking forward to this new challenge.

Ljubomir Vranjes, your former coach, doesn’t seem to be on the right track in Veszprem. The club even threatened to stop paying part of the salary. Are you still in contact with each other and what do you think about the situation in Hungary?

HG: We are not really in contact with each other anymore. We played against Veszprem during the group phase, at the time we talked a little bit. For me it’s really difficult to judge, because I only know from various media reports what’s going on there.  I watched the second leg match against Skjern and it’s not like the players of Veszprem didn’t want to win, but the Danes played pretty well.  And trailing seven goals after the first game was just too much. For Ljubo it’s not easy right now, but he’ll be getting players who he likes a lot and once the rebuild is done, he will be successful again.

Are you happy you play in Flensburg when you see fans wearing shirts saying “Vranjes Out”?

HG: Well, I guess it won’t happen here. But I don’t like this mentality, it’s all going way too fast for me. Just because you lose that game in Skjern or the first match at home in ten years – knowing that it is a huge number for Veszprem – it’s not right to look at the coach first.  Sure, they might be a bit more nervous over there, but continuity is very important in this business.