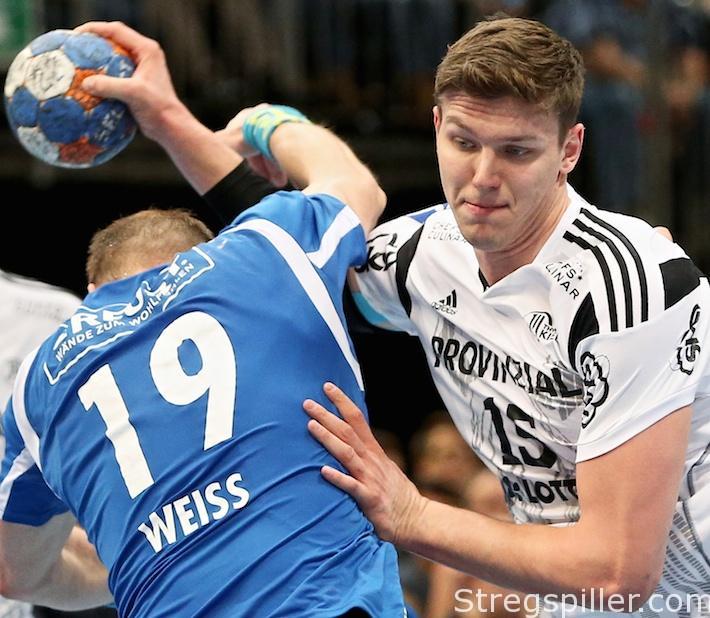 INTERVIEW – Playing in HC Vardar Skopje has been an emotional roller coaster for Christian Dissinger, as he confirms in this exclusive interview with stregspiller.com.  He will be the only German player at the upcoming VELUX EHF Champions League FINAL4 and talks about the prospects of the Macedonian champion, in Cologne.

“It has been an emotional roller coaster.”

Christian Dissinger does not hesitate when putting his season with HC Vardar Skopje into perspective.

The 27-year-old German left back joined the Macedonian handball powerhouse during the winter break, as he was released from his contract with THW Kiel.  Since then, life in Macedonia was anything but a smooth ride.

“Samsonenko’s withdrawal caused serious turbulences behind the scenes.  However, we also had some wild rides on the court.

“In the Champions League, we played very well during the group phase, as we got close to taking second place in our group, right behind Veszprém.  In the Round of Last 16, we were completely dominant and in the quarter-final, we defeated Pick Szeged, after all.

“In the SEHA League, we performed poorly for quite some time, yet we won the competition in the end,” sums up Dissinger.

Christian Dissinger hasn’t been involved in all of it, however. In the final match of the SEHA League, he sustained a serious elbow injury, which made another court appearance doubtful for the rest of the season.

But, he has been recovering surprisingly quick and in the recent Macedonian championship play-offs he returned to the pitch.

“I felt that it went okay and I experienced no pain or discomfort, in the two matches I played after my break.

“Of course, I am not one hundred percent yet, everything could be a bit better ahead of the the FINAL4.

“As we have no more games before we go to Cologne, things have to improve in the practice sessions,” he emphasizes.

Even though club owner Sergey Samsonenko decided to withdraw his unconditional support from Vardar, the club has pursued other avenues to stay competitive.  The Russian oligarch kept part of his shares, while giving room for a co-investor.

It all means that at least some of the current players can stay for now, but what about Dissinger?  Did he decide about his future?

“So far, I would not say that I am not interested in staying, but I take things pretty easy with regards to my future.

“I expect some clarification within a week or two,” says Dissinger, who won the European championship with Germany, in Poland back in 2016 and an Olympic bronze medal, in Rio de Janeiro, in the same year.

The only German in Cologne

Actually, Christian Dissinger will be the only German player at the VELUX Men’s EHF FINAL4 in Cologne – leaving out the referees. For a third year in succession, no team from the Bundesliga – still considered the strongest league in the world – managed to qualify for the season ending tournament.

“I have not given it much thought that I am the only German player at the FINAL4. It’s the people around me, who are aware of it and keep reminding me.

“Many people have approached me to talk about it and I’ve had quite a number of interviews on this subject already.

“As a matter of fact, I received more interview requests than what I was used to while playing in Kiel.

“Indeed, I may be able to benefit from being the only German at Lanxess Arena, or maybe my team can.

“However, I also hope for some German fans to support Vardar, because the only German player in the entire event is playing for this club” says Christian Dissinger, who is not surprised that German teams did not make it to the FINAL4 in recent years.

“German clubs assign a lower priority to the Champions League than teams from other countries – it’s that simple.

“In Germany, the Bundesliga is the most important competition for all teams – by far.  The physical demands in the league are so high that you cannot give equal priority to anything else.

“That’s especially true after the new TV agreement, which schedules teams to play on Thursday evening.  The arrangement makes it next to impossible to prepare properly for a Champions League match – certainly when visiting a team on a Saturday evening.

“Some people claim that the Bundesliga has lost quality in recent years, but I disagree.

“The top teams may have become a bit weaker, but on average the Bundesliga is stronger than ever,” finds Christian Dissinger.

“Nobody expects anything from us”

Vardar are in the FINAL4 for a third time in the club’s history and for the third time in a row.  Last year’s trip was no success for the ambitious Macedonians, as they finished fourth and last.  A result in stark contrast to their debut in 2017, when the team left Cologne with the trophy.

“We are the underdog and as such, we can play without any pressure,” Croatian right wing Ivan Cupic, told stregspiller.com back then.

Christian Dissinger is approaching the 2019 edition of the VELUX EHF FINAL4 with the same attitude as Cupic did, two years ago.

“Nobody expects anything from us, in fact most people are probably surprised to see that we even made it.

“Virtually, no one expected us to survive the quarter-final, but after a great game at home, we turned the match in Szeged in the second half.

“We managed to come back and we qualified for the FINAL4, while limiting the defeat to four goals.

“In Cologne, we’ll be facing Barcelona in the semi-final and not many give us a chance in this match.

“It’s true, of course, that we lost against them twice in the group phase (34:26 away and 30:26 at home, ed.), but that was back in November of last year.  As far as I am concerned, those results do not mean much, today.

“Yes – we are still the underdog and in my opinion it makes Saturday’s game a 50:50 affair – a match where both teams have equal chances to succeed.

“I we can overcome this hurdle, there will be time enough to think about what’s going to happen on Sunday.

“We will have all of Saturday night to think about it, so there’s no reason to be concerned about it now,” ends Christian Dissinger.