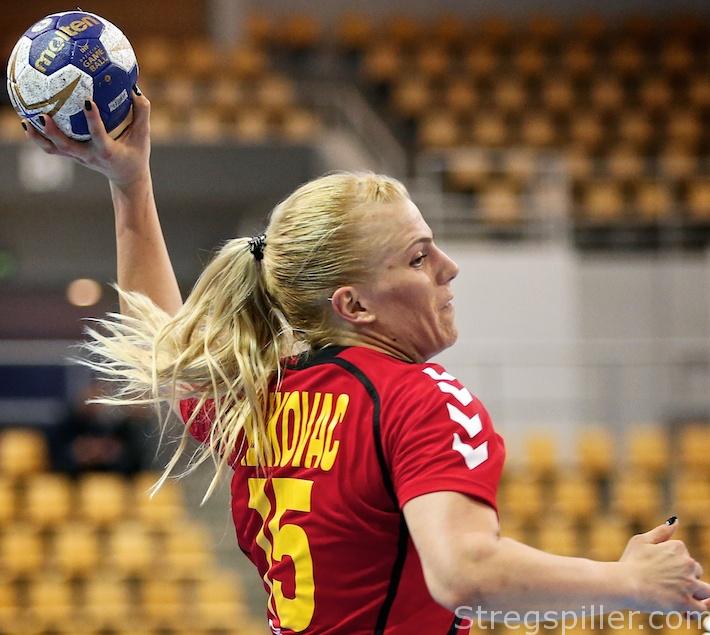 Just as expected, Vardar´s ticket for the FINAL4 in Budapest was never in danger in the return match, but the 28:26 win was important for Larvik´s self-confidence

After Vardar’s astonishing 14-goal victory at Jane Sandanski hall, there was no real doubt about the over-all outcome.

All Larvik could actually hope for, was restoring honor after the embarrassing performance in Skopje and maybe take a win in the return match.  Still, Larvik were missing Anja Hammerseng-Edin and Alina Wojtas and there was ongoing doubt, how much Linn-Kristin Riegelhuth would be able to contribute – the odds were definitely not stacked in favor of the home team.

Only when the score read 4:1 for Larvik after six minutes, a thought of hope developed for a brief moment, but Vardar soon eliminated any doubts there might have been.  For Larvik, the win was important in order to restore their pride after the dismal performance a week earlier.

It took Larvik less than a minute to get up 2:0, much to the pleasure of an eager crowd at Boligmappa Arena.

Five minutes later, when the hosts were leading 4:1, Vardar’s coaches, Indira Kastratovic and David Davis, already saw the need to call a timeout.  It was former Ciudad Real winger Davis, who addressed the players, and he seemed to be able to wake them up.

The next five goals in the match were all scored by Vardar, who changed the 1:4 deficit into a 6:4 lead in a hurry.

For the rest of the first half, Vardar had several two-goal leads, which Larvik all managed to equalize – until two minutes before the break, when the visitors went up by three goals for the first time (13:10).  Even though Nora Mørk missed a penalty, Larvik still managed to reduce the deficit before the two teams changed sides.

Just like in the first half, Larvik got off to the better start.  In fact, they managed to keep Vardar from scoring for the first five minutes of the second half.

The hosts scored twice (13:13); it was the signal for a second half, that would belong to the home team.  Of course, Vardar knew their FINAL4 berth was not in imminent danger and the club from Macedonia took things easy as a result.

A red card to Anja Althaus after her third two-minutes suspension also played a role in Larvik’s improving form curve – Vardar’s defense just did not have the same strength as before.

Still, Andrea Lekic & Co. managed to take a couple of one-goal leads, but soon Larvik took over and in a high-scoring second half, the hosts were more successful.  Larvik increased their lead to four, well into the final phase of the match before the team from southern Europe settled the final score at 28:26.

Considering the result of the first match, it was impressive to see Boligmappa Arena almost at capacity in support of the home team going for “Mission Impossible”.  It was equally impressive to see that many Vardar fans had made the long trip to Southern Norway, despite their team´s clear lead after the first game.

For Vardar, it will be all about preparing for the FINAL4, where they will need more focus and concentration than they showed this Sunday in Norway.  However, there is little doubt that the Macedonian handball powerhouse will be capable of doing just that.

Larvik can concentrate of winning another Norwegian championship – which seems to be a formality as it has been for so many years – and get ready for another Champions League campaign next season.

It was important for @LarvikHK to win today, after the massive loss last week. #ehfcl pic.twitter.com/tEYk269d7Y