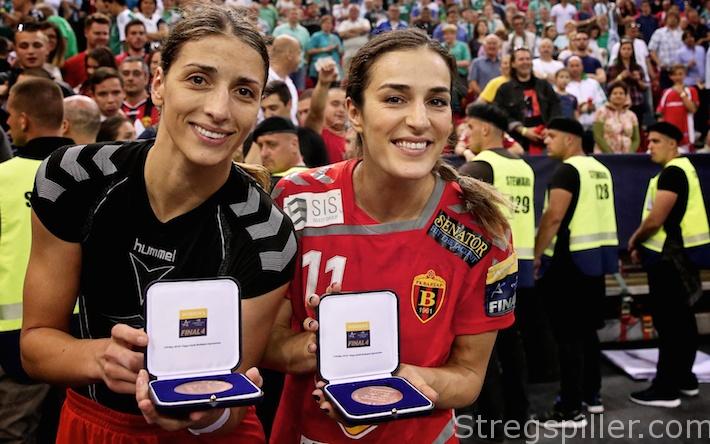 Vardar apparently wanted to win third place in the Women´s EHF Champions League. Even without Andrea Lekic, they defeated Buducnost by two goals in the bronze medal match.

In those “losers´ finals”, it is always a decisive question which team is able to resurrect itself, especially after the disappointment of having lost the semi-final only 24 hours before.

All Vardar could hope for was another third place – the third in succession – while Buducnost had to come to terms with having lost their chance to defend their Champions League title from last year.

Vardar finished third in the Champions League 2016, while Buducnost took a big drop from winning the title last year to finishing (only) fourth this season.  Even without Andrea Lekic and an injured Anja Althaus – she injured herself in the second half – Vardar managed to turn a two-goal half time deficit into a two-goal win in the end.

Leynaud, who had to wait 26 minutes for her first save in the semi-final, performed three saves in the first 10 minutes.  And it took Penezic – she only scored once on the previous day – to score three goals during the same time period.

Leynaud´s saves and Penezic´s goals played a big part in Vardar taking an early 5:1 lead, and the first 10-12 minutes of the game certainly belonged to the Skopje side.

As the first half progressed, however, Buducnost and Cristina Neagu, in particular, began to wake up.

Five goals from Neagu in the first half alone helped a lot, and just past the half way mark of the first 30 minutes Majda Mehmemovic’s shot equalized the encounter at 8:8.

The rest of the first half, the score was changing between stand-offs and one- or two-goal leads for Vardar – until the last minute, as goals from Biljana Pavicevic and Milena Raicevic turned the game around, just before the half time buzzer.  Buducnost’s first lead in the match also became the half time score.

In the dying seconds of the first half, Vardar were hit by another severe blow, as their experienced line player, Anja Althaus, had to be escorted from the court with an apparent knee injury.

Despite all the hardship, it only took Vardar three minutes and a bit in the second half to turn the table again,toget up 17:16.

But then, Katarina Bulatovic took over.  Having scored only once before the break, the experienced right-back send the ball back to the net, three times in a row, making it 19:17 for Buducnost.  Yet, another goal from her contributed to Buducnost increasing their lead to four (22:18) shortly thereafter.

Man-to-man defense on Cristina Neagu did not pay off for Vardar either, as Buducnost were good at setting screens for her. Actually, the Romanian star ended up the highest-scoring player of the match with eight goals.

Still, Vardar proved that they were able fight their way back, even without Lekic and Althaus on the pitch.  And as they changed a 26:25 deficit into a 28:26 lead with less than five minutes left, they seemed to have the upper hand.

It turned out to be correct, and when Russian international, Tatiana Khmyrova, made it 30:28 with half a minute to go, it was all decided.  Vardar players celebrated a third consecutive third place with their fans – almost – as if they had won the Champions League.

To both teams: Enjoy the summer holiday – a needed break before preparations for the 2016 Olympic games will start for quite a few of the players.

Managements of the two clubs are not likely to be in for much of a vacation either, as they will have find ways of how to optimize their squads for next season, in order to be able to take the last step to the absolute top of Europe.