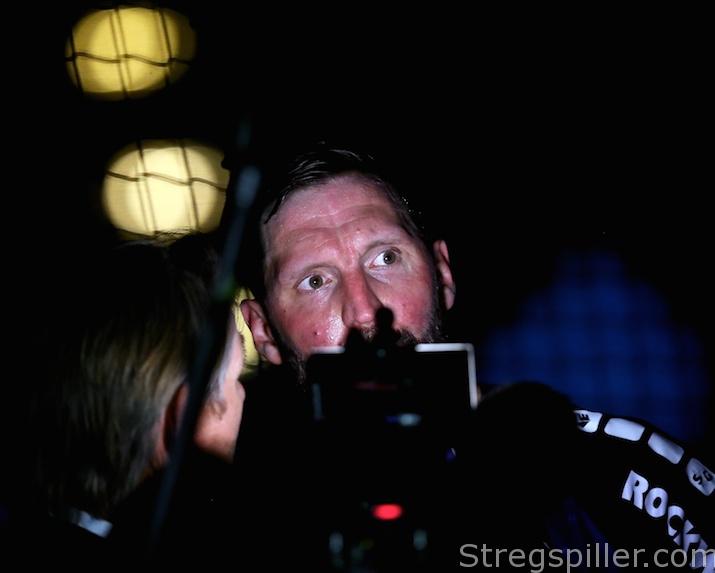 MATCH REVIEW – After missing the FINAL4 three years in a row, finally, Vardar booked the ticket to Cologne.

The Macedonian team simply steamrolled Flensburg in the return match, where the visitors could not get their game going.

Flensburg were chasing a two-goal deficit (24:26) after the loss at home, last Saturday.  The match was Flensburg´s 250th European match in history, while it was Vardar´s fourth successive attempt to reach the Champions League FINAL4.

Vardar owner Sergey Samsonenko had added extra fuel to an already hot encounter in Skopje, having made some controversial statements about Danish referees Mads Hansen and Martin Gjeding.

“Why do we need these Danish ´friends´ when Flensburg´s sponsors come from Denmark?” asked Samsonenko who even threatened to leave handball in case of any “trouble” with the referees.

Hard to imagine that such remarks can be tolerated.

After being eliminated in the quarter-finals three years in succession, finally, Vardar made it to the “promised land” – the  FINAL4, in Cologne.

In a packed Jane Sandanski arena, Flensburg did not have a real chance, and in the second half, Vardar effectively steamrolled their opponents.

All in all, Flensburg’s performance was disappointing, albeit against a brilliant Vardar team with Luka Cindric as the outstanding playmaker.

Vardar now have the honors of being the first club in history to qualify for a FINAL4 tournament on the women’s as well as on the men’s side, in the same season.

Vardar virtually buried their opponents in the first half already.  The team of head-coach Raul Gonzales simply took the initiative from the start.

Starting Daniil Shishkarev on right wing instead of Ivan Cupic seemed to be enough to confuse Flensburg somewhat.

Right from the get-go, Vardar succeeded in rolling up Flensburg’s left side, freeing up Shishkarev for scoring opportunities.

In the back court, Luka Cindric and Vuko Borozan followed through with effective shots, providing few chances for Mattias Andersson or Kevin Møller to shine.

In the established attack, Flensburg had more success against Vardar´s 5-1 defense, when compared to the first match.

Actually, the visitors produced an acceptable number of scoring opportunities, but it did not help them much, as they missed the majority of them.  A scoring percentage of 45 versus Vardar’s 88 summed it up.

The major reason for Flensburg´s scoring drought was found, once again, between Vardar’s goal posts.  Arpad Sterbik as well as Strahinja Milic, who replaced Sterbik, when Vardar played with one field player less.  The goalkeepers only added to Flensburg’s despair with many of their saves happening in one-on- one situations.

In short, Vardar were in complete control.

By the time the two teams emerged from the locker room, the mountain Flensburg had to climb resembled an out-of-category stage at the Tour de France.

But, for a short while, the North Germans made some moves to make the impossible happen.  A few goals from Hampus Wanne and Thomas Mogensen reduced the distance to three, a couple of times, at the beginning of the half (16:13. 17:14 and 18:15), but that was it.

Cindric kept orchestrating the Macedonian offense, and his teammates followed through in a high-scoring second half.

Flensburg´s attacking game and efficiency did not improve much, even though they scored 17 goals in the remaining 30 minutes. Vardar – more or less – scored as they pleased, playing some thrilling handball.

Eventually, Vardar’s fans showed off their language skills, displaying a banner that read “Auf Wiedersehen” while celebrating in the stands.  Flensburg were never close to turning the table in this quarter-final tie.

Luka Cindric was not only the architect of Vardar´s inventive and inspired play of attack.  The 23-year-old Croatian playmaker was his team´s highest scoring player with seven goals.  He also provided at least as many assists during the 60 minutes.  Did I say he is only 23?  What an outstanding and talented handball player.

On Tuesday evening, Martin Gjeding and Mads Hansen officiated a semi-final in the women´s championship in Denmark.

This evening, they entered the lion’s den at Jane Sandanski.  Inevitably, there was extra focus on their performance after Mr. Samsonenko´s earlier remarks.

Of course, referees rarely become the point of discussion, when the difference between two teams is as big as it got this Thursday evening.

Still, even when I take off my red and white glasses, I’d say that the two Danes had a brilliant performance.  They never gave in to the enormous pressure coming from the crowd, and they definitely did not seem to be influenced by Mr. Samosenko’s comments.

Of course, their performance was not without mistakes.  That is impossible. Referees do make mistakes just as players and coaches do.

Tonight, Gjeding and Hansen can look themselves in the mirror and be content with their efforts.

When Jane Sandanski arena is packed as it was, it’s an acoustic inferno for any visiting team. It certainly was to Flensburg.

No, the 7,500 spectators did not make the difference in this match, but their vociferous efforts probably added two or three extra goals to the scoreboard.

It was impressive to experience how the home crowd celebrated each and every goal, even when the match was long decided.

Vardar can start preparing for their first FINAL4 in history.  What they can do in Cologne is hard to predict, especially as long as we do not know the other three participants.

But, in the quarter-finals, Vardar showed what they are capable off – it’s probably more than many of us would have believed before it all began.

Anyway, they should be a refreshing newcomer when Europe’s best four teams meet at Lanxess Arena, on June 3-4.

Now, it is up to Kiel to secure German representation at the FINAL4.