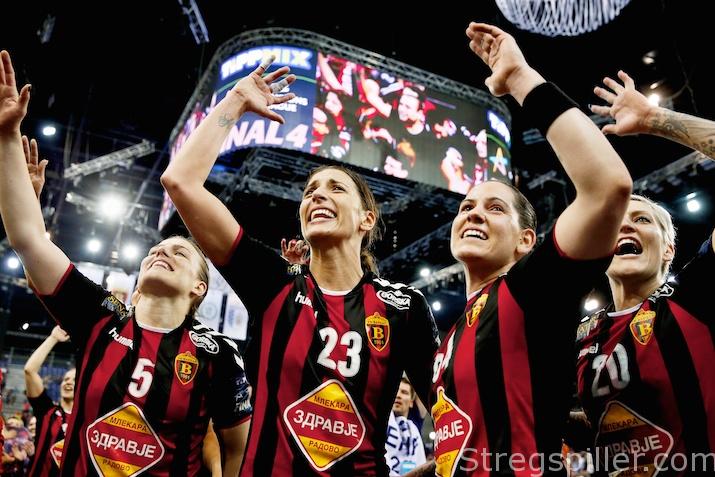 MATCH REVIEW – Just like in the first semi-final between Gyor and Buducnost, the final result does not reflect the difference between the two teams on this Saturday evening.

Vardar were dominating the defending Champions League winners from A to Z, clearly demonstrated by the 11-goal lead already in the first half.

CSM were the defending champions, after finishing their maiden Champions League voyage in 2016, winning the trophy, unexpectedly.

With Swedish, Per Johansson, as their third coach this season, they were aiming for nothing less then defending their title.

Just as in 2016, they came from behind in the main round, and in the quarter-finals, Hungarian Ferencvaros did not cause them much trouble.

In fact, the Ferencvaros’s supporters were the only ones’ making it uncomfortable for CSM, throwing any number of different objects at goalkeeper Paula Ungureanu.  But it did not stop the Romanians from recording 35:30 and 27:26, victories.

Vardar had more trouble than expected with FC Midtjylland in the quarter-finals, as the ambitious Macedonians won their matches by a combined  four-goals.

The team from Skopje showed an “impressive” stability so far, as they finished third, every time they attended the FINAL4.

Just one of the reasons why I was happy to be in Papp Laszlo Arena this Saturday was the fact that I could witness this astonishing match with my own eyes.

If I had not, I would not have believed the result and certainly not the way it came about.

It seemed as if all the talk about Vardar always finishing third at the FINAL4 had made the Macedonian players furious, and if so, they certainly took that furor to the pitch.

As the first half went along, I could not help but thinking of the old  hit by Madonna “Like a virgin – touched for the very first time!”

For long periods, CSM looked as if they were playing together for the very first time.

Some of the (many) errors they committed could not be categorized any other way then beginners´ mistakes.  And too many of their shots lacked quality – it had to go wrong.

But why did it go wrong as it did?

Bucresti’s offense fell short of any creative elements that could have posed a real threat to Vardar´s 5-1 defense with Andrea Kilkovac in the forward position.   And Inna Suslina rendered CSM’s efforts from the 7-meter line futile, saving three of as many penalties.  Those were the Russian goalkeeper´s three and only actions in the first half.

At first, it was Andrea Penezic, who was unstoppable, scoring goals almost at will, but soon thereafter, several of her teammates took over.

After six minutes already, CSM coach Per Johansson found it necessary to call a first timeout.

At that point, his team was trailing 1:5, but things would go from bad to worse for  the reigning champions.

In goal, Jelena Grubisic was replaced by Paula Ungureanu, but the change did not help either.

1:5 deficit increased to 1:7, 2:8 and 3:9, as Camilla took part in the Macedonian goal show, mainly on fast breaks.  Eventually, Alexandra Lacrabere and Jovanka Radicevic chipped in as well.

At that point, Johansson talked it over again but to no avail.

As half time was approaching, Vardar’s players seemed to lose a bit of their concentration.  It led to some technical mistakes, and CSM benefited, reducing the gap to eight goals before the buzzer.

Right before the two teams would change sides, Vardar’s Tatiana Khmyrova was sent off with a red card.

Credit to the Russian referees, by the way, for taking a video check before making their decision.

In the second half, CSM  succeeded in scoring penalties against Suslina.

Gnonsiane Niombla got the ball passed her three times, but that was just about all CSM could get done.

They did manage to reduce the gap to seven-goals (16:23) early in the second half, still Vardar  had no problems maintaining their advantage.

The Macedonian’s were not missing Khmyrova terribly, even though their defense was not quite as sharp as in the first half.

Grubisic returned to goal, only to be replaced by Paula Ungureanu again.

In the last minutes, CSM were allowed to improve the score again, but as mentioned the final result did not tell the whole story.

Duel of the Match

Two of the best female playmakers in the world were meeting in this match – Isabell Gulldén (CSM) and Andrea Lekic (Vardar).

Apart from organizing her team´s offense, Lekic also found the time and resources to score six goals on eight attempts.

Gulldén was far away from her usual self, just like the rest of her teammates.

Vardar can look forward to their first Champions League final in the history of the club.

Irina Dibirova may be the official head coach – even though Ace Stankovski was enlisted stoday – but Koksharov appears to be the man in charge.  He is doing a fine job.

CSM will have to try to motivate themselves for the bronze match tomorrow.  That can be a tough job in itself.