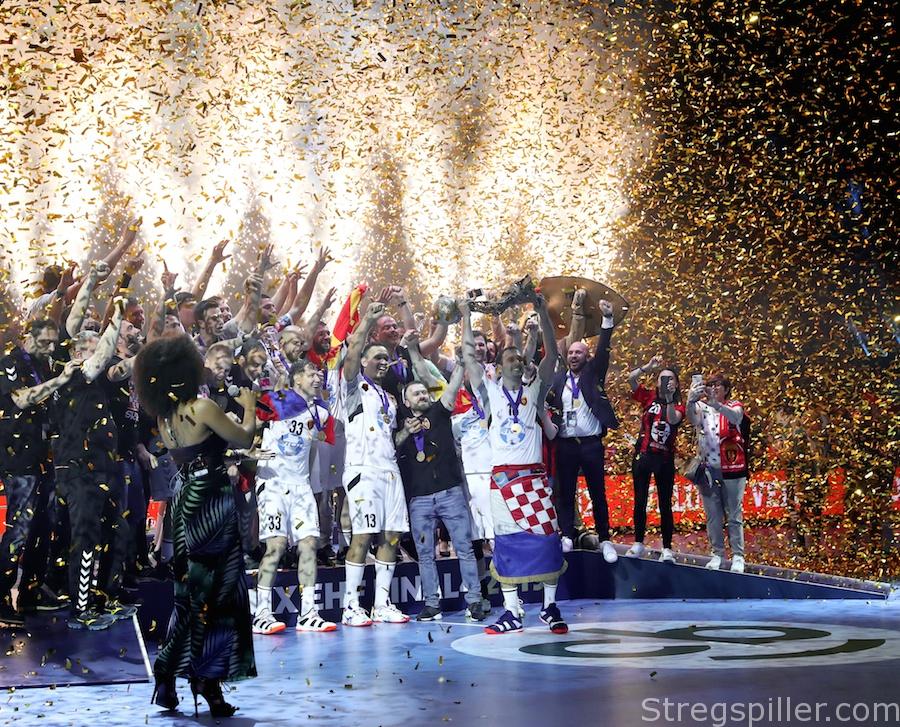 FINAL REVIEW – For the second time in three years, and maybe for the last time, HC Vardar won the VELUX EHF Champions League, while Veszprém lost a final for the fourth time in as many attempts.

From six goals down towards the end of the first half, Veszprém managed to reduce the deficit to one goal a few times in the second half, but could not fully turn the game around.

Through their astonishing comeback in the semi-final against Barca on Saturday, Vardar joined the league of teams who have performance amazing comebacks in the 10-year history of the VELUX EHF FINAL4.

Winning 29:27 after trailing by seven goals until way into the second half places Vardar in the same league as Kiel who caught up with a six-goal deficit to defeat Barcelona in 2010, as Flensburg who came back from another six-goal deficit to also defeat Barcelona in the 2014 semi-final and Kielce, who defeated Veszprém 39:38 after penalties in the 2016 final, despite being nine goals down with 14 minutes left.

It was Vardar’s third FINAL4 in a row and their second final after they won the competition on their maiden voyage in 2017.

For Veszprém, it was their fourth EHF Champions League final in history, but unlike their Macedonian opponents, the Hungarian club had never won the trophy.

A central question was how many physical and mental resources Vardar had spent in the comeback against Barca, while Veszprém had a deeper squad and more time to rest than their opponents.

What a swan song from this current Vardar squad! Regardless of how the club looks next season, it was very likely a swan song for this bunch of players at the FINAL4.

Even in their present state, winning for the second time in three years was impressive, considering how many players they lost before this season and during it.

Vardar seemed to be in control after the first half, but as is tradition at this event, they were close to losing it in the second half.

With great moral and tactical cleverness, however, they fought off any attempt of a comeback from Veszprém, who may be close to losing faith in ever winning the Champions League.

Karacic played the entire first half for Vardar and did not seem to be bothered by his leg.

For Veszprém, there was no sign of Sterbik on court, although Roland Mikler was not exactly successful in goal.

Nagy came on after 16 minutes and judging by the way he reduced the deficit to 13:10, his shoulder did not bother him.

13 minutes into the game, the Vardar injury list was extended by Daniil Shiskarev, as the Russian right wing sustained an injury to his hamstring or groin.

That left Ivan Cupic as the team’s only right wing for the remaining 47 minutes, while it was bad news for the Vardar defence as well.

At first, Vardar did not appear to be handicapped, and they soon took a firm grip on the match.

Their defence had rather fine working conditions against a Veszprém team, who tended to neglect their usually brilliant wings, and in the attack, the Vardar players frequently spoiled us with fine combinations and spectacular goals, being particularly good at finding Rogerio Moraes on the line.

Veszprém were only leading once, at 2:1; the rest of the way it was Vardar’s half.

While Dejan Milosavljev was leading the goalkeeper duel clearly against Mikler, Vardar went ahead 8:5, 11:7 and even 16:10 before taking a five-goal lead with them to the dressing room.

If it was not for the particular history of FINAL4 games taking unexpected turns, one would have said that Vardar were safely on the road to their second title in three years.

Yet, we were very close to seeing one of those “crazy” turnarounds again.

Unlike in the first half, Karacic seemed to be bothered by his leg now, and at the same time, another player could hardly walk onto the court but played a crucial part.

After Mikler´s unsuccessful first half, Veszprém coach David Davis had no choice but to send on the injured Arpad Sterbik.

However, while he could hardly walk, the Spaniard could still manage some magnificent saves and he made an impact right from the start of the second half.

Vardar pulled three goals ahead again, but Veszprém came back within one.

That was as close as they got, however, as Ivan Cupic kept a cool head to keep Vardar in the ascendency.

With three of his side’s final four goals, the Croatian veteran on the right wing had a decisive part to play in the Vardar triumph.

“The way we stand together is the main secret behind our triumph.

“We fight for each other all the way, and we are actually like one big family.

“Furthermore, we have the greatest coach in the world, but basically, it is more the heart than the head the plays the main role with us.”

“We did not reach our usual level of defence in the first half, and that meant that we were trailing all the way.

“Vardar were simply better than us tonight. We have had a season with many ups and downs, but we still believe we can win the Champions League, despite four missed attempts. We believe a lot in the system David Davis has introduced and we will be back stronger.”

First for Vardar, celebrations, of course.

On the longer term, it is more difficult to say what is in store for the pride of Macedonian handball.

The team seem to go on in some form, but probably not on a level, which will deliver another trip to Cologne in the near future.

Veszprém will simply have to go home, get over this latest blow and try to make themselves believe that they will succeed in winning the Champions League one day.