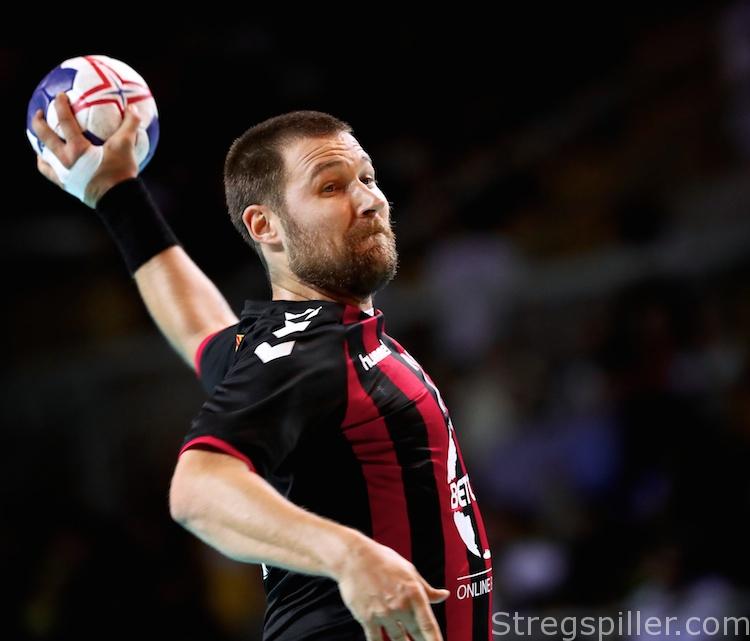 stregspiller MATCH OF THE WEEK REVIEW – After two halves as different as night and day, HC Vardar celebrated their fourth win in a row, while Rhein-Neckar Löwen suffered a second defeat on the road.

Löwen’s coach Nikolaj Joacobsen´s beloved seven-against-six attack did not help the visitors, as the home team turned the tide in a fast paced second half.

*Vardar has been one of the surprise packages thus far, having won their first three matches, and the loss of key players like Arpad Sterbik and Luka Cindric not as big a handicap as some expected.

*Rhein-Neckar Löwen appeared less stable in recent games, further highlighted in their home game against VfL Gummersbac, in Germany’s domestic league, on Thursday evening, where Löwen were trailing by six goals before winning 30:24.

Rhein-Neckar Löwen were dominating the first half, as long as they were able to take out the pace of the game. After the break, Vardar increased the speed and Löwen’s weakness became transparent.

Coach Nikolaj Jacobsen tried his favored seven-against-six attack in the second half, but the tactic backfired on several occasions. Outstanding individual performances by Igor Karacic, Timur Diborov and goalkeeper Dejan Milosavljev contributed a great deal to the Macedonian triumph.

The visitors dominated the first 30 minutes, leading by three goals several times before getting up by four (15:11) shortly before the break.

The home team cut the deficit to two before changing sides.

Löwen´s double substitutions between attack and defense – Gideoan Guardiola and Jesper Nielsen play central defense – was supposed to turn into a liability. Vardar focused the early phase of their attacks on the perceived weak-spot, but did not succeed, not as long as Mikael Appelgren performed brilliantly in goal.

And on the other side of the pitch, Löwes attack was well organized by Andy Schmid.

In particular, Jannick Kohlbacher benefited from some of Schmid’s superb passing, and on the right back position, Alexander Petersson was firing on all cylinders.

Skube’s injury, late in the first half, didn’t turn out to be serious and he re-entered the court eight minutes later.

At that point, however, his team had reversed the course of the game already, courtesy of Igor Karacic.

In fact, it took the hosts less than two minutes to change a two-goal deficit into a one-goal advantage (16:15).

Rhein-Neckar Löwen pushed back one more time (21:20), but the rest of the game belonged to Vardar, much to the joy of the 5,500 spectators.

15 minutes into the half, Karacic handed Skopje their first two-goal lead (23:21), and from then on the Macedonian squad never looked back.

Eventually, Jesper Nielsen received his third suspension, triggering a red card, but at this point Vardar had secured the match.

Vardar’s winning streak has now extended to four. The team of coach Parrondo, is leading their group, with maximum points. Only Paris and Szeged (Group B) have been able to maintain a clean record as well.

Excitement is already building ahead of their next match, on Saturday, when they’ll be visiting Kielce, a club that struggled in their home win against last-placed Kristianstad.

Löwen only have until Wednesday, when they’ll receive Kristianstad, to think about how they let the game in Skopje slip from their hands.