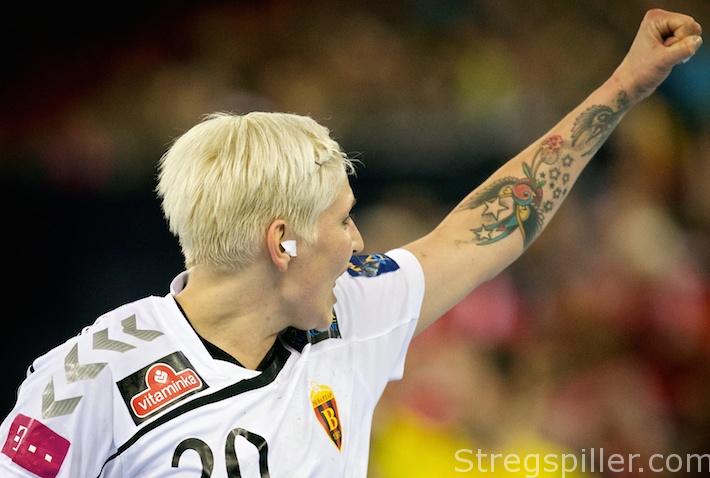 Vardar is virtually back at the FINAL4 in Budapest

HC Vardar humiliates Larvik by 14 goals in Jane Sandanski Arena in the first leg of the Champions League quarter-final.

Larvik had enlisted Linn-Kristin Riegelhuth Koren back on right wing after her maternity leave, even though she was not expected to make substantial contributions yet.

The Norwegian record champions who just won their 18th national league title and 1212th consecutive game during the week, were still missing Polish left back Alina Wojtas, as they have all season, as well as Anja Hammerseng-Edin because of a finger injury.

It seems that three of the FINAL4 participants were already determined this Saturday.  After Buducnost´s 29:24 away win against HCM Baia Mare and Gyor´s even more impressive 31:18 triumph in the Hungarian derby against FTC, Vardar took a decisive step towards Papp Lazlo Arena, in Budapest, when they defeated Norway’s record champions by no less than14 goals in Jane Sandanski arena in Skopje.

While Vardar offered solid handball, their job was certainly not made difficult.  Larvik’s performance was extremely disappointing.

Actually, the half time result (16:9) was still quite flattering for Larvik, considering how they were run over for most of the time. Already within the first quarter of an hour, Larvik’s coach Tor Odvar Moen had to call for “timeout” twice, as his crew went down 5:1 and 9:1.  Unfortunately, neither one of the two mini-breaks had any immediate effect.

Vardar increased the tally 12:1 and it was only when Kastratovic and Davis began using their bench, that the visitors were able to score goals.

Until then, Larvik´s offense had been no match to Vardar´s robust and physically strong defense.  It was virtually impossible for Larvik to create acceptable scoring opportunities.  And the shots they did fire were lacking force and quality.

Rarely had a goalkeeper such easy conditions, establishing as high a saving percentage as French international Amandine Leynaud in Vardar’s goal, in this first half.  Still, Larvik were able to reduce the gap by a bit before the buzzer sounded. Vardar had loosened the grip because of the aforementioned bench rotation.

The second half offered slightly better working conditions for Larvik’s attack, but this was also the case for Vardar´s offense.

Alma Grisovic started the second half in Larvik’s goal instead of Sandra Toft, but with little effect.  Midway through the match, Toft returned for the rest of the game.  Larvik did manage to reduce the gap to six goals again (17:11), but with their strongest formation back on the pitch, it did not take long before the host went up by 10 goals again (24:14).

When Larvik made another attempt for a modest comeback, Vardar came right back scoring five successive goals (30:18); eventually increasing the margin of difference to an astounding 14 goals at the final buzzer.

Surprisingly, Jane Sandanski arena was far from being fully occupied, but those who did attend, did a terrific job supporting their team, while putting pressure on the opponent.  Not that Vardar needed it on this Saturday afternoon.

“Every little goal counts!” said Tor Odvar Moe, when he called his last timeout with more than 18 minutes left to play in the second half – Vardar were leading 24:14.  But his players did not seem to pay attention, as Andrea Lekic & Co. cruised towards a 14-goal victory.

Obviously, there is a return match to be played at Boligmappa Arena in Larvik, next Sunday.  But that game looks like a mere formality for the club from Skopje before fully focusing on the FINAL4 tournament in Budapest.

Not even with the help from “Dovregubben” will Larvik stand a chance to turn the tables – we can (almost) congratulate Vardar to their FINAL4 berth.  No wonder Vardar’s players celebrated the win, as if they were “through” already.