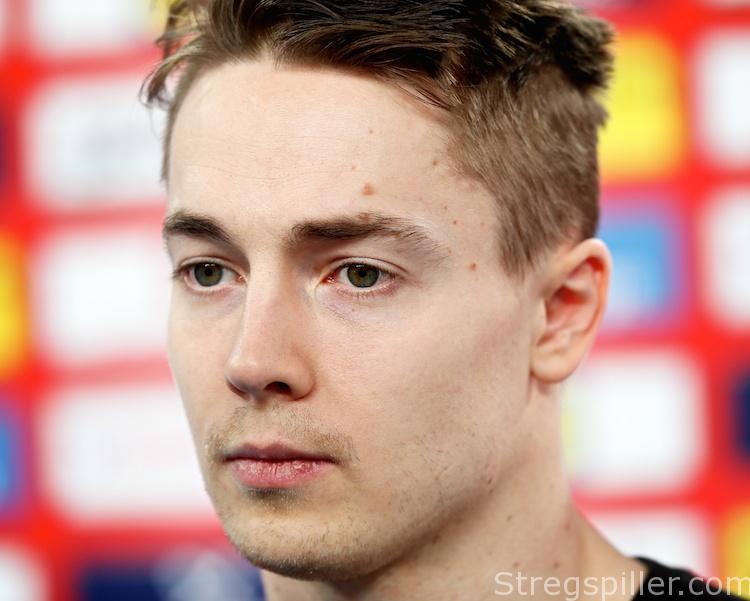 “Versatility is our strength”

INTERVIEW – Denmark´s joker on left back, Michael Damgaard, finds that depth and versatility of the Danish team, are the two key factors explaining why the squad is in the semifinal at the 2018 European championship.

The 2018 European championship, in Croatia, has opened people´s eyes with regards to Michael Damgaard.

The performances of the 27-year-old, talented, left back from SC Magdeburg have certainly been that – a real eye opener. Such as Denmark’s last main round match against Macedonia when he scored 11 goals on 13 attempts.

“That was a fun game to play, of course. But the match had no real significance anymore, and we could all play a bit more relaxed than at other times.

“However, I am definitely happy having scored 11 goals in a match at a European championship,” says Michael Damgaard who has developed into a bit of a joker on the left back position, where fans are accustomed to seeing Mikkel Hansen.

“I think we have approached this tournament with exactly the right attitude, and now we reached the semifinal – we have been talking so much about it as it was our first objective.

“Now, our next goal is to reach the final. I know that we’ll all be extremely disappointed if we do not reach this next stage.

“However, I think we have executed our tactics so well that our chances are really good, come Friday evening.

“Concerning my own performance at this tournament, I am pretty content with what I have done.

“I feel that I started into the championship really well and that’s something I take with me to the match against Sweden,” Michael Damgaard tells stregspiller.com.

“Before any major championship, I am always in doubt and excited what my role will be.

“However, Nikolaj Jacobsen has done a lot integrating my skills in the way our team plays. And the confidence, I gained is great – very cool.

“I enjoy every opportunity that I get on the court, as I realize that there is tremendous competition within our team.

“It is not just about Mikkel (Hansen) any more. For instance, Rasmus Lauge has proven his enormous qualities in virtually every match, while Morten Olsen is a very good playmaker as well, apart from his ability to play right back.

“Furthermore, we have Mads Mensah who has won a couple of German championships with Rhein-Neckar Löwen, and in addition to those I already mentioned, there are several young players on their way, having just as much potential as the rest of us.

“It emphasizes the enormous quality that’s competing for a few positions on the Danish national team and this circumstance makes it even greater to be a part of it,” explains Michael Damgaard who sees the width of Denmark’s roster as the main reason for his country´s success at this championship.

“Hopefully, it means that in the end, we’ll have the physical resources that will make the difference.

“Handball has turned into a sport that more and more is all about small details.

“There is obviously a huge difference between missing a shot or scoring successfully – especially if the score is tight at the end of a match – extra physical and mental resources at this point of the competition will often decide the fight.”

“Lifting the trophy at the end is always the fun part, but it’s the small things that decide a game these days,” he says.

Jacobsen has meant a lot

Michael Damgaard is crediting Denmark’s coach for the team´s recent string of success.

The 46-year-old former left wing of the Danish national team has been in charge of the squad as of last spring, next to his job with Rhein-Neckar Löwen. According to Damgaard, Jacobsen has brought a lot to the Danish side.

“You only have to look at Rhein-Neckar Löwen to see his qualities as a coach.

“The players of Rhein-Neckar Löwen know his system by heart and can virtually execute it wearing a blindfold.

“Nikolaj is particularly good in conceiving a tactical plan, a strategy that he believes in.

“He has certainly added another dimension, although Gudmundur Gudmundsson also did really well, but he just missed good fortune, apart from winning the Olympic gold medal with the team.

“Nikolaj has sort of changed the matches that we used to lose by a goal or two and turned them into victories,” finds Michael Damgaard

He also is quite certain what will decide the semifinal against Sweden, on Friday night.

“I am not sure if we will see a match of many goals – defense and the goalkeepers will play a crucial part, I believe.

“These two factors will also result in some essential counter attacks and it will be very important to score as many of these kind of goals as possible,” finds the Denmark’s Michael Damgaard.