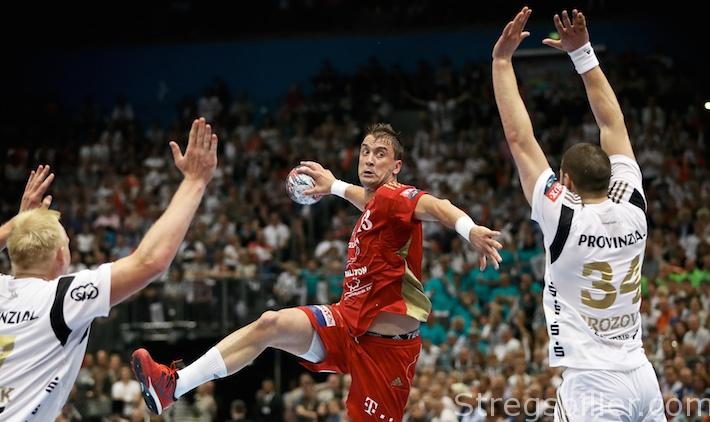 MATCH REVIEW – Kiel were reaching out for the Champions League final, but Veszprém grabbed the ticket after extra time.

Before the FINAL4, many people were already talking about the event as if it was matter of fact that the last game of the tournament would be played between Paris and Veszprém.

“But people should not forget that we were the ones who sent one of the top favorites, Barcelona, out in the quarter-finals,” Kiel goalkeeper Niklas Landin said before the game, while Veszprém’s line player Andreas Nilsson pointed out that, “Kiel will always be Kiel, and they will always be a difficult opponent.”

Being Germany´s only representative in Cologne, Kiel could count on the support from the majority of the crowd, although, “Veszprém fans could be heard everywhere,” as Kiel’s coach Alfred Gislason put it.

As Landin correctly pointed out, Kiel eliminated FC Barcelona in the quarter-finals in convincing fashion, while Veszprém had certain difficulties with Vardar Skopje.  However, Kiel´s injury problems had not disappeared since the quarters; quite the contrary was true.

The second surprise of the day was in the making, with Kiel leading by two goals with a minute and a half left to play.

Still, Veszprém managed to ride out the storm, partly because of a hasty shot from Kiel´s Christian Dissinger.  In extra time, the Hungarian side left no doubt about the final outcome of the match.

Apart from a couple of one goal leads for Veszprém, the first half hour belonged to Kiel, whose attack benefited considerably from Christian Dissinger´s return from yet another injury.

Veszprém practiced a more offensive version of their usual 6-0 defense, than we were used to seeing.  The Hungarians are known for pushing their backs forward, but this was done even more so this time around.  But it did not disturb Kiel´s attacking play much.

The North Germans took a fast 5:2 lead, and even though Veszprém got back in a hurry at 6:5, it did not take Kiel long to take a two-goal lead again.  Courtesy of a solid 6-0 defense and with Niklas Landinin top form – he even saved a penalty from Momir Ilic in the dying minutes of the half – Kiel could take a three-goal lead at the break.

Just like Paris in the first semi-final, Kiel went “cold” at the beginning of the second half.  The “goal drought” lasted eight minutes and 38 seconds, to be exact.

Veszprém won this period 5:0 and changed a three-goal deficit from into a two-goal lead (17:15).

However, Kiel were far from being defeated, and just past the half way mark, Dumagoj Duvnjak brought the Germans back at 19:19.

After a few more one-goal leads for Veszprém, Kiel got the advantage once again when the scoreboard read 23:22.  And as Duvnjak increased the lead to 25:23 with a minute and 29 seconds to go, Kiel were smelling the final.

A timely goal of Laszlo Nagy reduced the score for Veszprém and after Christian Dissinger missed on a hasty shot with half a minute left, Casper Marguc equalized, securing extra time.

After Croatian left-back Ivan Sliskovic had appeared on the scene – kind of secret weapon – scoring Veszprém´s first two goals in over time there was really only one team in control – Veszprém.

Niklas Landin did his best to keep Kiel in the game, but his efforts were in vain, as his teammates ran out of gas and ideas. Veszprém cruised to a three-goal victory that could not be challenged anymore.

Kiel will have to motivate themselves for the bronze medal match against an equally disappointed squad from Paris.

Veszprém, in turn, can look forward to an all East European Champions League final against Kielce.

Call it coincidence or not, but the last game of the men´s Champions League somewhat resembles the women´s final which was also played between two clubs from East Europe – CSM Bucuresti and Gyor

At the same time, Veszprém might be able to restore honor to Hungarian handball by accomplishing what their fellow countrywomen from Gyor were unable to achieve – winning the Champions League 2016!