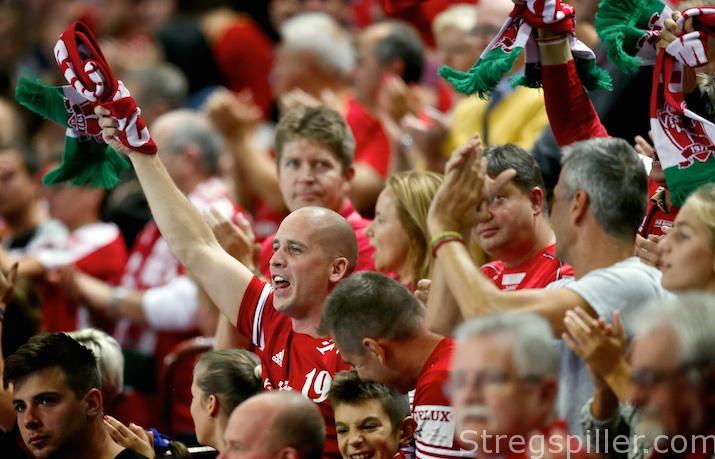 Veszprém return to the FINAL4

stregspiller.com – MATCH OF THE WEEK REVIEW – Flensburg stunned Veszprém as they jumped to an early 5:0 lead at Vesprém Arena, on Saturday afternoon, but the home team quickly took the driver´s seat, and the remaining 30 minutes were reduced to a mere formality. Veszprém returns to the VELUX EHF FINAL4, in Cologne.

As if trailing by six goals was not bad enough, Flensburg were further handicapped missing Jim Gottfridsson due to injury.

Yet, the German champion shocked their opponent, when they took a 5:0 lead, six minutes into the match.

Backe by the frenetic support from the crowd, the hosts showed great moral and already some time before half time, they had not only caught up,  but made sure that they would lead the affair all the way to the end.

Surprisingly, Flensburg coach, Maik Machulla, started with Torbjørn Bergerud in goal instead of Benjamin Buric, who had shown impressive form throughout this season, while Marius Steinhauser began on right wing instead of Lasse Svan, rewarding Steinhauser’s effort in the Bundesliga against Leipzig, this past Wednesday.

While Steinhauser could not repeat his performance, Bergerud got off to a tremendous start.  The Norwegian shot-stopper played a crucial role in Flensburg’s opening phase, almost catching up with the six-goal deficit from the first leg match.

Rasmus Lauge enjoyed a spectacular start to the game as well and he was one of the reasons, why it took Veszprém nine minutes to score their first goal, when Laszlo Nagy reduced to 5:1.

Flensburg stayed ahead until 7:2, before Veszprém shook off their poor opening phase.  Add Roland Mikler to the equation – he replaced Arpad Sterbik in goal – and it further explains why the home team got back on track.

After 17 minutes, Flensburg changed to a 7-against-6 attack, but this could not prevent Veszprém from catching up at 9:9, and in the final minutes of the half, Flensburg´s tactics backfired completely, as they conceded one goal after the other in an empty net.

Ordering Simon Jeppsson on the right back position wasn’t a decision that paid dividends. The Swedish international played without self-confidence and his missed shots became even more expensive with an empty goal at the other end of the court.

With less than five minutes left on the game clock, Dragan Gajic benefited from a penalty shot that handed Veszprém their first lead in the game (13:12), and thereafter the hosts cruised to a 17:13 half time score.

With Veszprém up by 10 goals on aggregate, the remaining 30 minutes were just a formality. Avoiding another defeat was all that Flensburg had to fight for.

Machulla had replaced Steinhauser with Svan and he was the one, who opened the second half cutting the score to 17:14.

Hampus Wanne followed up further reducing to 17:15, but Veszprém quickly tightened the grip and re-established a four-goal advantage.

As the game progressed, Flensburg found themselves unable to stop Veszprém, as the Hungarian record champion went up six goals (26:20), before a few successful actions from Simon Jeppsson reduced the gap towards the end of the match.

For Veszprém, the next stop is Cologne and the FINAL4, at the first weekend of June.

Flensburg will focus on their number one rank in the Bundesliga, where they can now concentrate completely on winning their second German championship in succession.  Next opponent: THW Kiel on May 12!