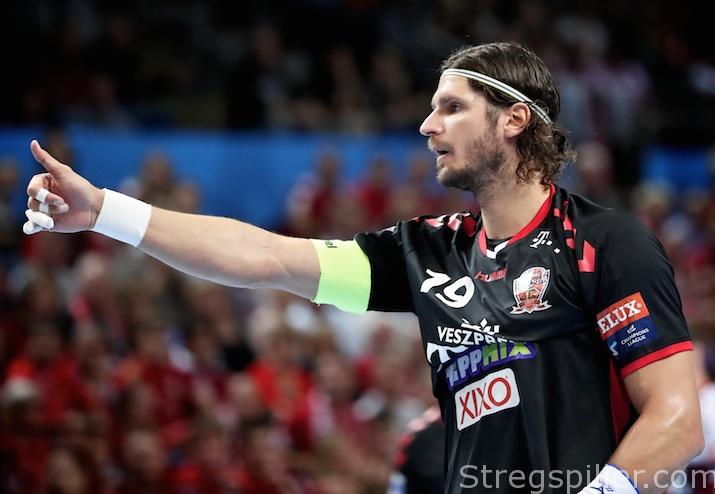 stregspiller.com – MATCH OF THE WEEK PREVIEW – As both teams are already assured of the Round of Last 16, a favorable ranking will be at stake, when Vardar and Veszprém meet in Saturday’s top game in Group A.

Vardar – 2nd in Group A – 15 points – and Veszprém in third position with one point less, will fight for the best possible rank, as the club that will finish second, will meet a squad from groups C and D in the knock-out round.

In addition, Veszprém will aim to avenge the 27:25 loss at home to Vardar back in September of last year – Vardar´s only win in the seven Champions League matches between the two teams, thus far.  Back then the defeat led to the dismissal of Ljubomir Vranjes as head coach in Veszprém, replaced by David Davis who took over soon thereafter.

Vardar may still be missing the two left backs – Vuko Borozan and Sergei Gorbok – as well as line player, Rogerio Moraes due to injury

Both teams booked impressive wins in their most recent Champions League matches.

Vardar took their fighting spirit to Mannheim, where they defeated Rhein-Neckar Löwen 30:27, and Veszprém handed Barca Lassa their second loss in the 2018/19 Champions League season (29:26).

On the domestic front, Veszprém recorded a 36:17 victory at home against Budakalasz Tuesday, while Vardar´s last match – Champions League aside – dates as far back as January 31st, when they succeeded 26:23 on the road against Serbian Vojvodina in the Seha League.

It’s quite possible that the match will showcase an interesting duel between Vardar’s new keeper, Milosavljev, and former shot-stopper, Arpad Sterbik, now Veszprém.

Considering 22-year-old Milosavljev´s performances so far this season, it‘s not a given that Sterbik will keep the upper hand.  In fact, the young Serb has done a marvelous job in Vardar’s goal.

Still, Sterbik and Mikler represent one of the most experienced goalkeeping duos in all of handball and it may well make the difference in this game.

Ivan Cupic still is a fantastic wing player– one of the best in the world, and Russian international Shishkarev is a highly qualified stand-in.

Latvian giant Kristopans is difficult to cover and a challenge for any defense formation.

Veszprém’s Tønnesen, who missed the World Championship because of a hand fracture, just came off the injured list, in time for the restart of the Champions League.  A rather fortunate development for the Hungarians as Nagy is pretty far away from his best level.  Still, his experience will be useful on the defensive end.

With the Slovenian/Croatian combination Skube/Karacic, Vardar have two extremely qualified playmakers who are both dangerous shooters as well, as demonstrated in the match against Rhein-Neckar Löwen, when they combined for nine goals.

However, Lekai and Mahé possess similar qualities, especially Mahé’s form curve has been trending up, ever since World Cup ’19.

With Borozan and Gorbok out, German Christian Dissinger, who arrived in Skopje back in the fall of 2018, will become crucial far Vardar.

As Kentin Mahé has seen more court time as playmaker, Nenadic could be moved to the left back position, where he will form a powerful trio together Machovsek and veteran Momir Ilic.

No discussion – Dibirov is a world-class wing player and often playing in a class or his own.  But, Veszprém’s experienced duo Strlek and Manaskov will have the edge.

Stoilov is a line player at the highest international level, but he will be on his own for most of the match as Rogerio Moraes won’t play, and Karalash won’t spend much time on the floor either.

Missing injured René Toft Hansen for the rest of the season may be a handicap for Veszprém’s defense, but not in attack, as long as Blagotinsek and Nilsson perform.

Until recently, I may have given Davis the nod as the better one of the two Spanish coaches.  He’s definitely moving Veszprém in the right direction.

But Parrondo, the former assistant coach of Vardar´s women´s team, has proven all the skeptics wrong.  Last week’s win against Rhein-Neckar Löwen was a tactical masterpiece.