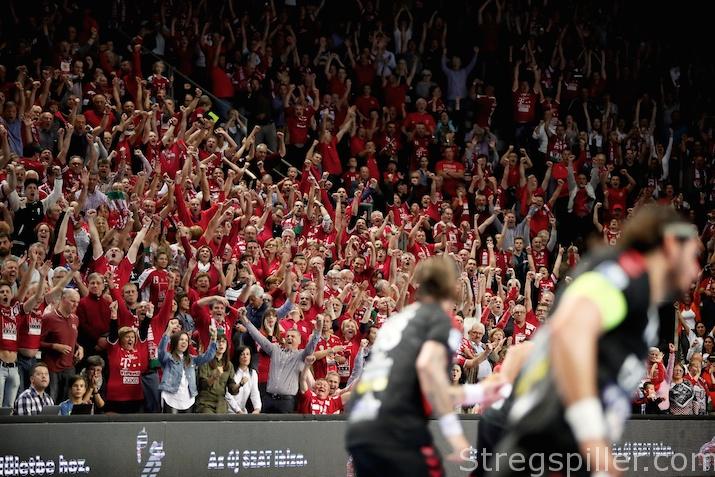 Veszprém – the only team with maximum points

Now, Veszprém is the only team in the Men´s Champions League that has not lost a single point.

However, the ambitious Hungarians had a hard time succeeding in their Group B match against Kiel, while Vardar gave up their first point, in Group A.

Pick Szeged had the honor of being the first team to take a point from ruling champions Vardar this season. Actually, more was in it for the Hungarian hosts.

In all fairness, Szeged could have lost it all when Timur Dibirov missed – a completely open shot – on a counter attack.

It’s still a mystery how the Russian left wing did miss this opportunity?!

It would have been very bitter for Szeged if they had lost both points this way, as they had the initiative throughout the match.

Vardar were only leading at 3:2, 4:3 and 5:4, whilst Szeged were ahead by two or three goals during most of the game.

However, each time the home team enjoyed the advantage, Vardar bounced back, and with a minute and 18 seconds left, Jorge Maqueda scored the equalizer (26:26).

The first 30 minutes at Veszprém arena was the best half I have seen from Kiel this Champions League season.

Andreas Wolff was fantastic in goal, and Steffen Weinhold was just as outstanding in attack. At the half time buzzer, the German visitors had almost silenced 5,000 frenetic, Hungarian supporters.

But after the break, it only took Veszprém less than three minutes to catch up (15:15). Thereafter, the home team went ahead (19:17) and it felt like the end of all German hopes, but Kiel showed great morale.

Niklas Landin did just as great in the Kiel goal, as Wolff had done before him, and the visitors broke even once again at 20:20 with 16 minutes left on the game clock.

However, when Niclas Ekberg sent a penalty wide with a minute and 34 seconds left (25:23), Veszprém could start celebrating, as the game was decided.

Veszprém scored once more, before Kiel settled the score at 26:24.

We have seen it so often in Barcelona´ s Champions League group phase matches over the years:

Once in a while, the Catalans get into trouble, in matches where they are favorites, only to win it in the end.

This Saturday night, however, Barca really had their back against the wall, at home against Nantes who were leading 19:14 with six minutes into the second half.

Still, Barcelona created a stunning comeback and won as clearly as 31:25.

Outscoring a rather competent team from Nantes 17:6 in the remaining 24 minutes of the game. There is only one word for it: First Class.

SG Flensburg-Handewitt were six goals down with 15 minutes left to play against PGE Vive Kielce. Still, the North Germans managed to get a 25:25 draw.

In the dying seconds of the match, Marius Steinhauser scored the equalizer after his team already looked like a sure looser.

After 10:10 at the half, the start of the second half belonged to Kielce. The Polish squad dominated and got their first six-goal lead at 19:13.

The hosts held on to the margin via 20:14 and 21:15, before Flensburg staged a most impressive comeback.

Kielce were still leading by four goals, 25:21, with three and a half minutes left, but the home team would not score any more. Flensburg caught up and tied the match just in time.

Right wing, Marius Steinhauser, caused a frantic celebration, when he scored his only goal in the second half, making it 25:25.

There are a few words that come to mind when describing such a comeback: Heart. Believe. Morale.

To Kielce, the outcome was yet another – severe – blow to their Champions League hopes.

With three points after four matches, the Polish team already faces difficulties, in trying to reach the most attractive ranks in Group A.

Flensburg, on the other hand, find themselves in great position with five points after the first four matches in the 2017/18 Champions League campaign.

Swedish international, Jerry Tollbring, had a great Saturday at his former home ground at Kristianstad Arena, scoring seven goals for his current club, Rhein-Neckar Löwen. The reigning German champions had no problems whatsoever in keeping Kristianstad at bay.

For coach Nikolaj Jacobsen it was pleasant to rest several of his key players and still win big 35:22.

It could have been a successful return to “Palau Blaugrana” for Kirl Lazarov, if he and his new teammates from Nantes had managed to hold on to their five-goal lead against Barcelona.

As it turned out, the revisit became a bittersweet experience to Lazarov – he contributed four goals – as Nantes lost 31:25.

Flensburg’s Swedish young gun, Simon Jeppsson, after the 25:25 in Kielce:

“This was a crazy game. We fought with our hearts all the way, and we can go home to Flensburg with a good feeling!”

Other Results in Groups A + B

Already Wednesday, Szeged should be able to hold on to the top spot, despite playing away, against Plock.

Thursday, Rhein-Neckar Löwen are the odds-on favorites in Mannheim against Zagreb, and so are Nantes on Saturday at home versus Kristianstad.

In Group B, the North German derby between Kiel and Flensburg Sunday will be a heated affair and exciting as usual, while Kielce meets Veszprém on the very same day.

Elsewhere, Paris are expected to win in Aalborg, while Meshkov Brest may have the edge in Celje, on Saturday evening.