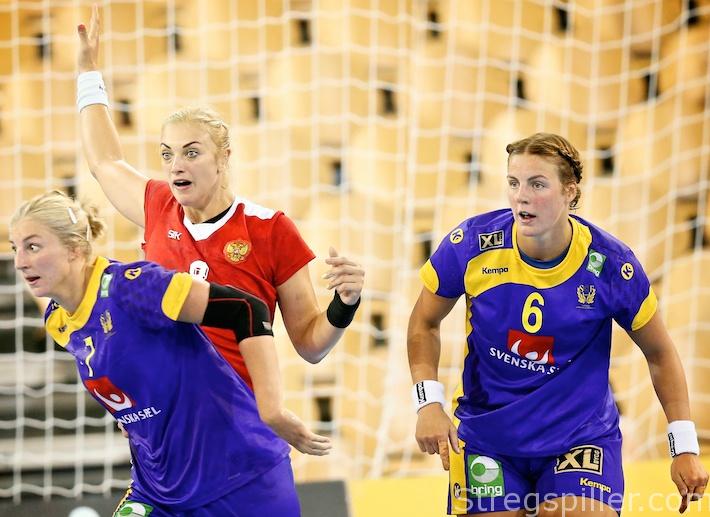 Russia is the first team in the quarter-finals after a great comeback against Sweden; Netherlands and Korea split points, while France ran over Argentina.

So far, Brazil was the most impressive team in the women´s tournament – their physical strength was particularly overwhelming. The host had started with a surprising win against Norway, than went on to demolish Romania.

Spain opened their Olympic campaign with a decisive victory against Montenegro before losing by three against Norway. The key question ahead of the match: Could Spain better cope with Brazil´s tremendous physical presence?

Surprisingly, Spain had a good grip on their opponent from the start.  The Spaniards began the game in a 5-1 defense, a formation that apparently confused the Brazilian players.

Brazil also had their troubles with Silva Navarro.  The 37-year-old Spanish goalkeeper, who saved 46 percent in her first two matches, raised her savings level even further to 50 per cent in the first 30 minutes.

At the other end of the court, numerous Spanish crosses also caused Brazil problems.  In sum, all these factors put Spain into the lead – 14:8 after 22.

Still, Daniela Piedade & Co. managed to cut the deficit to three goals at the half. The big question before the second period was if Spain would maintain their momentum, or if Brazil were actually back into the match?

The question was answered quickly. Spain continued to resist a powerful Brazilian crew, and the fast and inventive Spanish play of attack also continued to cause damage on the other end of the court

And a brilliant Silvia Navarro in goal assured that her team was able to stay in front.

Brazil’s other dilemma – the team was not able to score during periods when Spain was forced to play with less than six players.

It was not until the 15th minute of the second half that the hosts managed to put points on the scoreboard, while being a player more on the court – Alexandra do Nascimento reduced to 21:19.

With eight minutes left on the game clock, Brazil got their final opportunity to catch up with Spain, playing six against four for a minute and 42 seconds. But coach Soubak’s crew did not make it any further then reducing the deficit to one goal, before Spain took the initiative once again, settling the score at 29:24.

Silvia Navarro is only 1.69 m tall, but the 37-year-old compensates well for the lack of height with her reflexes and experience in goal.  We have known for many years, that Navarro is a great goalkeeper and this Wednesday morning in Rio, Brazil received a strong reminder of this fact.

Spain must be counted among the medal contenders in this Olympic tournament.  Their combination of physical strength, speed and tactical cleverness, was put on display against a Brazilian team that had left such overwhelming impressions after first two match days.

Brazil remains among the competitors for precious metal, of course.  One defeat does not change the equation, but Morten Soubak and his Brazilian squad have come to realize that physical strength by itself does not win Olympic gold.

Before the start of the tournament, no one would have expected these two teams without points at this stage of the competition.

Romania and Montenegro were two most disappointing surprises in Group A until this point and it was Neagu & Co. who kept their hopes for a quarter-final appearance alive.

Courtesy of a fantastic performance by Paula Ungureanu in goal, plus 10 goals from Cristina Neagu, Romania managed to land a four-goal win.

While Romania can still look forward towards a quarter-final, Montenegro will now have to hope for a miracle or two, if their Olympic tournament should continue beyond the group phase.

Things were turned upside down between the two teams in this meeting. Until now, Norway had booked one victory and one loss, while Angola had won both their first matches – much to the surprise of many experts.

However, Norway left no doubt, that it was their turn to break the winning streak of the undefeated African crew.

In the first half already did Norway get up 10 goals, and in the remaining 30 minutes, they increased the margin of difference to 11 before winning 30:20.

The Russians are the “comeback queens” in this Olympic tournament.

In their opening match, Russia changed a 20:13 deficit against Korea into a 30:25 win – and against Sweden, Trefilov´s crew was down by six goals, but came back winning the match by two.

The game did not go Russia´s way for a long time.  With two and a half minute left in the first half, right wing, Anna Vyakhireva, received an incorrect red card for shooting Sweden´s goalkeeper, Filippa Idéhn, in the face on a 7-meter penalty shot.

But Idéhn was moving and the rules clearly state that the goalkeeper has to keep her head still, in order to penalize the shooter with red card.

Five minutes into the second half, Russian goalkeeper Anna Sedoykina had to be substituted with a suspected serious knee injury.

Still, Russia was able to perform another great comeback, defending their status as undefeated.

With six points, Russia is qualified for the quarter-finals – the first team doing so, while Sweden will continue their struggle.

Wednesday was a happy day for Dutch star Estavana Polman.  After many days filled with rumors, her boyfriend, football star Rafael Van der Vaart, officially signed a contract with Danish top team FC Midtjylland.  The club is based in Herning, less than 90 km from Esbjerg, where Polman is playing and residing.  That is considerably closer than Betis (Spain), where van der Vaart played until last season.

However, the news was all that Polman could be happy about this Wednesday.

A missed penalty from Lois Abbingh after the final buzzer cost the Netherlands a point and resulted in the first draw of the tournament.

After an equal first half, the Netherlands went ahead by five goals (26:21) in the second period, but unlike in their first two matches, Korea managed to stay in the game for a thrilling finish.

With three points, the Netherlands still have a good chance to reach the quarter-finals, while the Koreans still hope to reach the knock-out phase of the competition.

During the match, the most exciting question was if Argentina would reach double digits in number of goals scored?  They did so with seven minutes left to play, while France recorded their biggest win in the tournament, so far.

With a bit more concentration, France could have won by a considerably bigger margin, as they missed quite a few scoring opportunities.